It’s been a roller-coaster of a ride for Zion Williamson and the New Orleans Pelicans in the rookie’s first professional campaign.

After undergoing surgery for a torn meniscus just days before the start of the regular season, the Pelicans crawled out to a 6-22 start and appeared to have lost any chance at meaningful playoff contention.

Fast forward to early March and the Pelicans are very much in the thick of the playoff chase, buoyed by the 2019 first overall pick. Zion is averaging stats that only 12 rookies have matched (23.6 points, 6.8 rebounds, 2.2 assists) and efficiency numbers that break the all-time scale for those same numbers (59.9 eFG).

While the sample size is still rather small, Zion is inarguably an All-Star level talent or above who will dominate on the court for years to come...and off of it.

Just one month after being selected out of the NBA draft by the Pelicans, Zion inked the second-most lucrative shoe deal by any rookie at five years, $75 million. (LeBron signed a seven-year, $97 million contract.) While LeBron’s deal offered more guaranteed money, Zion’s $15 million annual average surpassed the King ($13.8 million).

Zion is putting on a show in the just-debuted Air Jordan 34 pic.twitter.com/ISFD8HaCte

“I feel incredibly blessed to be a part of the Jordan Brand family,” Zion told Nick DePaula. “Since I was a kid, I dreamed of making it to the league & having the type of impact on the game Michael Jordan had & continues to have today. He was one of those special athletes I looked up to.”

A certain grandeur carries itself from such an agreement that could easily create distance between a player and his team or inspire jealousy from opponents much as it did between Patrick Beverley and Lonzo Ball in 2017. And yet there’s something about Zion that separates him from the rest.

Where narcissism could arise, this 285-pound tank displays more bashfulness than aggressiveness off the court. Instead of throwing his weight around the locker room as the team’s anointed star, he spends his time handing out customized Jordan shoes (Bayou Boys) and ‘Mardi Gras’ Beats headphones.

“Sometimes I think people try to place expectations on me and I don’t really worry about it,” Zion said on ESPN+ “The Rooks.” But I’ll look in the mirror and be like man I wonder if they know I’m only 19?”

His size, jaw-dropping athleticism, oncourt prowess and humility has major endorsement companies falling over themselves to sign the 19-year old phenom who scored 20 or more points in 13-straight games. Only two other rookies have surpassed that streak to date: Blake Griffin and Michael Jordan.

Keeping his low-key demeanor and on-court focus has allowed Zion to lift himself above the distractions that could come along with such off-court partnerships. True, these corporations may see Zion simply as a brand, but it’s also in their best interests to make sure he succeeds, something both they and Williamson’s agents at CAA prioritize.

In a recent interview with Kevin Durant’s manager and co-host to ESPN+’s, “The Boardroom,” Rich Kleiman told me about some of the challenges that come with building a business:

“These guys got to the place they’re at because basketball comes first. It has to be first, second, third, fourth. There’s a process to learning how to balance them both.”

In that respect, CAA agents Austin Brown and Lisa Joseph-Metelus have quite a bit of work in front of them. They face the challenge of leaving Zion with the room he needs to fully prepare and grow his game on the court, manage his extensive list of endorsements and all those eager to join the fray, all the while giving him the space to be a 19-year-old kid.

Zion Williamson has signed an exclusive, multi-year memorabilia and collectibles partnership with Fanatics. Fun fact: As a lefty, Williamson begins his signature by signing his last name first. pic.twitter.com/OJ0GUCZhG9

“For Zion,” Kleiman continued, “I’m sure that these brands fit very comfortably. I’m sure CAA’s done a great job in finding brands that represent who he is. Required time that doesn’t get in the way of what he needs to do for basketball. These brands understand that the success that athletes have on the court is in so many ways the way they came together in the first place.”

While the monetary numbers have not been disclosed for Zion’s other partnerships, we can assume he’s already cracked a rather elite list of NBA athletes in off-court earnings based on his earnings with Nike. 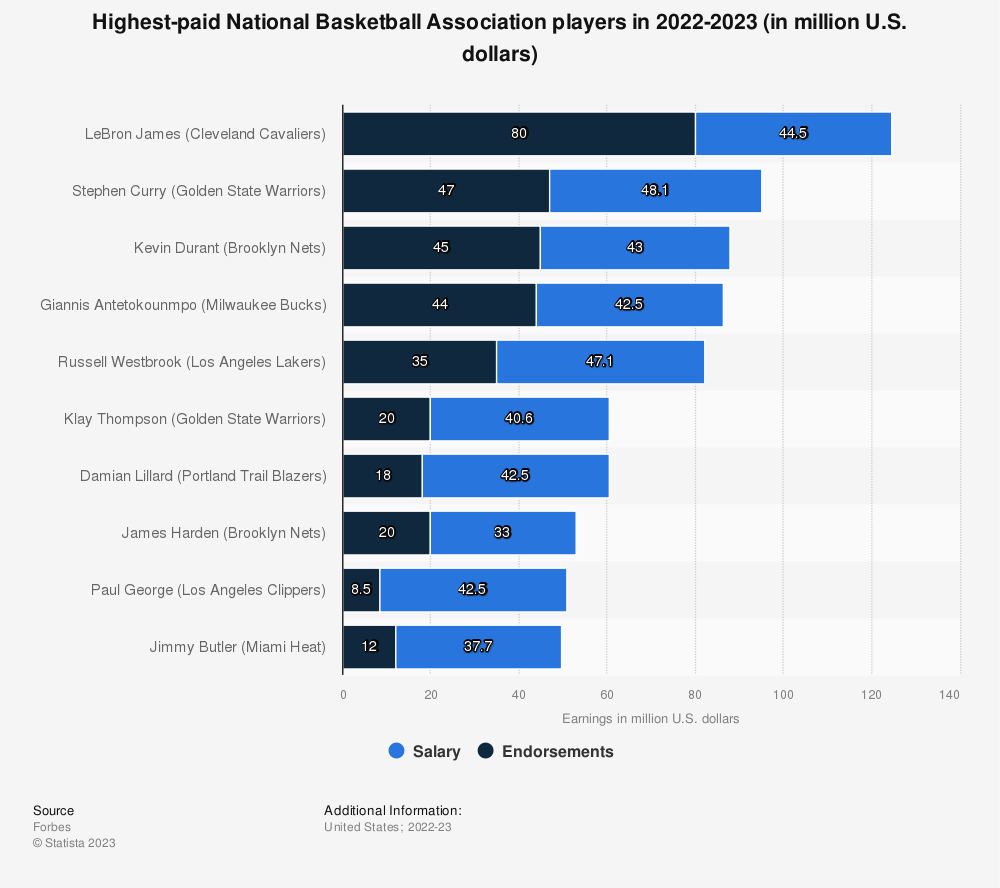 With the $15 million already guaranteed from Nike, it’s clear Zion has already emerged as a top-four off-court earner.

“We’re on the cusp of witnessing one of the most historic NBA Draft classes of all time and it’s no secret that Zion is a driving force behind that fact,” Panini America CEO Mark Warsop said in a press release. “He’s a transcendent talent and a must-have presence in all of our NBA and collegiate basketball products for this season and beyond.”

Panini America even went so far as to extend their agreement to the Pelicans so they could develop their “Rookie Spotlight Series,” a clear indication as to what Zion means to the company.

“We signed a multi-year marketing partnership with the New Orleans Pelicans that incorporates integrated content/highlights to support our relationship with Zion.”

While it appears the Pelicans and CAA have taken all the right measures to ensure and protect Zion through the early stages of his career, the noise must be deafening at times.

“(You) can’t really ignore it,” Zion said on ESPN+’s “The Rooks” when discussing the hype for his regular season NBA entrance.

These are some of the same challenges that superstar predecessors had to navigate for themselves. LeBron James has often lamented of not having someone on the highest level to talk to or confide in, but he became that steadying presence affecting all those who came after him including Kevin Durant.

LeBron and Durant opened up about their roads to the top on a recent episode of ESPN+ ”The Boardroom” hosted by Jay Williams and Rich Kleiman.

“I didn’t have anyone to help me along the path,” LeBron said. “I want the ones who come after to me to learn what I’ve been able to accomplish.”

“It’s been amazing,” Durant said referencing James. “Just to watch somebody who comes from where I come from...you see a guy who’s willing to bring other guys with him and say, ‘We can all shine together.’ That just sends a great message to guys like myself.”

Their bond helped them each realize success together and separately. LeBron started the process by surrounding himself with powerful friends possessing the same fire as he in Maverick Carter and Rich Paul, among others, and they helped Durant along in his quest.

“When the game was over, he came right up to me,” Carter said on The Boardroom of Durant. “Asking me questions. I could tell he was trying to get to the right question, but he didn’t know how to say it.”

“I spent some time with Bron during the lockout just to see how his whole team worked,” Durant said.

How does this apply to Zion, you ask? Zion already has a peer he can both grow with on and off the court in Lonzo Ball.

How much does Lonzo Ball mean to Zion?

They have shared the floor 336 of Zion's 433 minutes, the most of anyone on the team.
Article coming tonight.... pic.twitter.com/3ncIo4Yybm

“Lonzo went through a similar situation so he knows what I am going through right now and he is giving great advice on how to handle it,” Zion said on ESPN+ “The Rooks.”

“Zion can come to me for anything,” said Ball on the episode. “It doesn’t have to be basketball related. I am always here for him and obviously you know his play on the court is amazing.”

Ball arrived in the NBA amid similar hype, in addition to carrying his own Big Baller Brand led by his father, LaVar. The ultimate failure of the brand and his evolution as a business man is a lesson he can pass on to Zion.

Lonzo Ball on The Woj Pod: “I’m controlling everything now. You really can’t tell me what to do. It’s my life, my career. I’m making all the decisions.”
Spotify: https://t.co/PRFU6cBH2P
Apple: https://t.co/OmQWFBhynV

The NBA made its investment in Zion clear when they elevated the Pelicans to 30 nationally televised games for his rookie campaign. The actions of the league and these companies seem to infer that Zion may one day grow beyond just an ambassador for brands and into a partnership role.

“About five or six years ago when Kevin was at an all-time high in brands he was working with, we really just felt like there was shift in the climate,” Kleiman told me. “Being able to be a pitchman for so many brands wasn’t authentic and it wasn’t believable. It just wasn’t in line with what he wanted for his business. We started shifting to brands we looked at as partners. Brands that we could have as legacy brands. Brands that would work with us across what we’re doing from a media landscape, a philanthropic standpoint. There’s obviously some public facing components to it. It turned our view toward being more of a partnership. That’s an evolution. Earlier on a lot of athletes look at brand deals as a way to get their name out there some more.”

So, what’s next for Zion?

Zion will likely begin by giving back much as LeBron and Kevin have and that could symbolize the beginning of his transition into a role of one of the NBA’s youngest and most successful entrepreneurs.

You may have heard of the LeBron James Foundation. Also, the Kevin Durant Charity Foundation. It’s only a matter of time before Zion begins his own.

Regardless of what specific enterprise he opts for or when it takes place, Kleiman says there’s nothing to suggest he can’t accomplish what LeBron and Durant have done in a smaller market like New Orleans.

The Zion Impact:
-Zion gained 40,000 followers in one night according to @opendorse
-800 highlight videos created according to @WSC_Sports
-ESPN’s highest rated game this season according to @Ben_ESPN
-Ticket prices for next five games rising according to @TickPick

Zion’s first and immediate goal should be the success of the New Orleans Pelicans and he’s off to a good start. With Zion in the the starting lineup, the Pelicans carry the best net-rating (26.3) in the NBA. In fact, the Pelicans are positioned to make a late surge into the playoffs over the Grizzlies and usurp friend and former AAU teammate Ja Morant in the Rookie of the Year Award voting.

However, as Zion’s production on the court is drawing massive amounts of attention and wowing onlookers, his off-the-court exploits will continue to grow and soon be just as impressive.

Enjoy the entirety of my conversation with Rich Kleiman here and thanks for reading!

Special thanks to Rich Kleiman - Kevin Durant’s manager, as well as co-founder and business partner in Thirty Five Ventures, to Holden Hill, Panini America and Matthew Farhadi of CLT-MWW among others.