From Behind the Bar: My Final Pelicans’ Trade Scenario of the Season — I Promise — The Frenemies Edition

The Pelicans are finally looking like an NBA team following months of looking like a dysfunctional family reality show. You can thank the now fully juvenated Jrue Holiday (as JB Smoove said in the American movie classic Pootie Tang, "He was rejuvenated. You hear that? Rejuvenated. He was juvenated before, lost it... and got juvenated again. Rejuvenated!"), a more consistently motivated Anthony Davis, a lengthy homestand and the sometimes — but often not enough — run high pick and roll (read Owen Sanborn’s piece on it’s importance here). With our improved play and the playoffs still very much in reach it would be easy to just stand pat and play this season out. However, if we maintain our core three players and move our one true asset we can not only keep moving toward a playoff appearance, but also set ourselves up for the future. This does not come without consequence though. We will also be aiding the improvement of some of our biggest rivals and moving on from a fan favorite and seemingly solid locker room presence.

Before we dive in too far I’d also like to announce that I’ve joined whatever century we are in currently by adding a Twitter account to my social media accounts that I’ve been mostly ignoring. I’m still learning how it works, but give me a follow — @kevinbforbounce — if you have any interest in seeing me trolling the Pelicans’ PR staff or live roasting players in-game like this (or if you just have to see pics of one more person’s dog and cat): 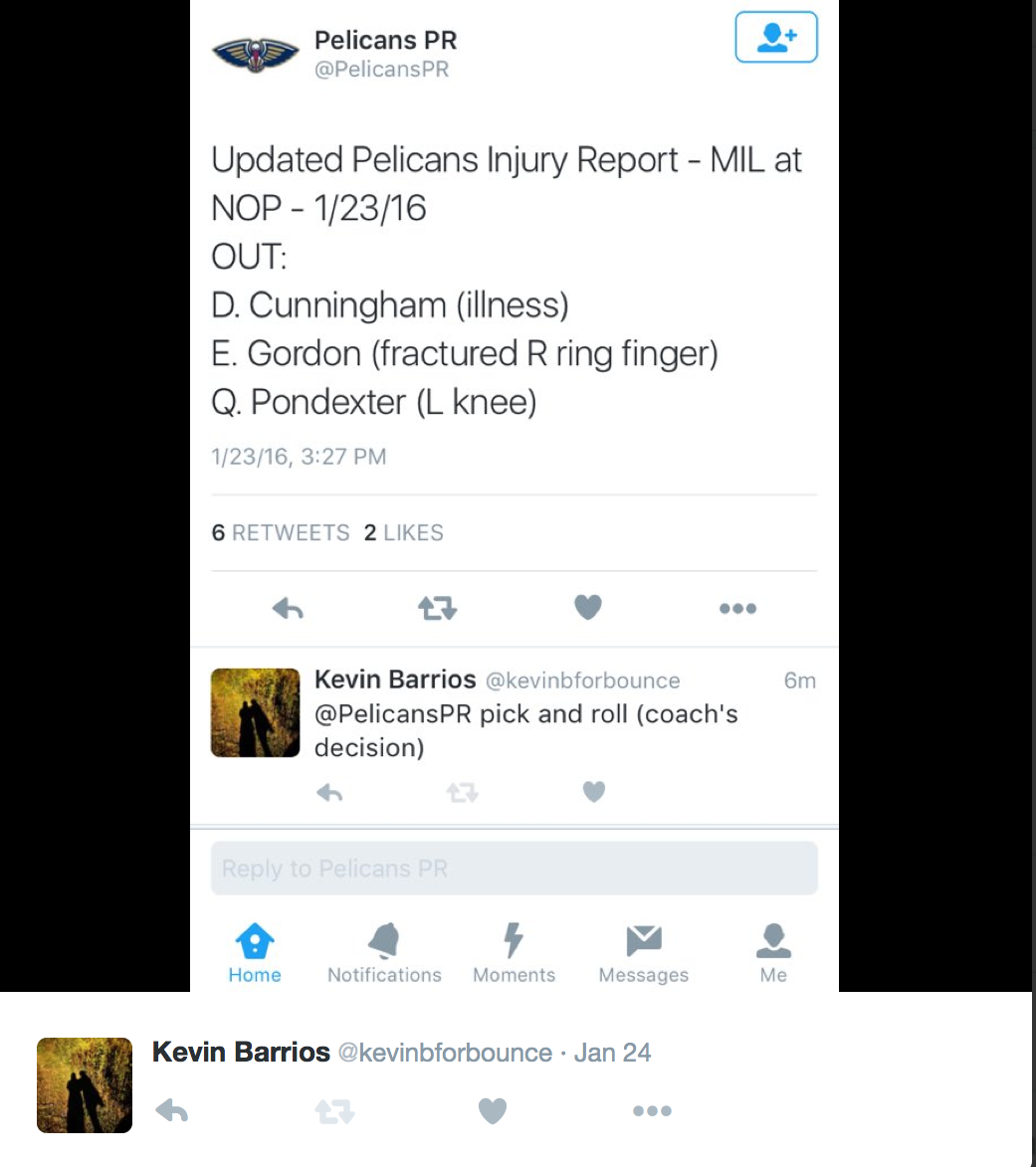 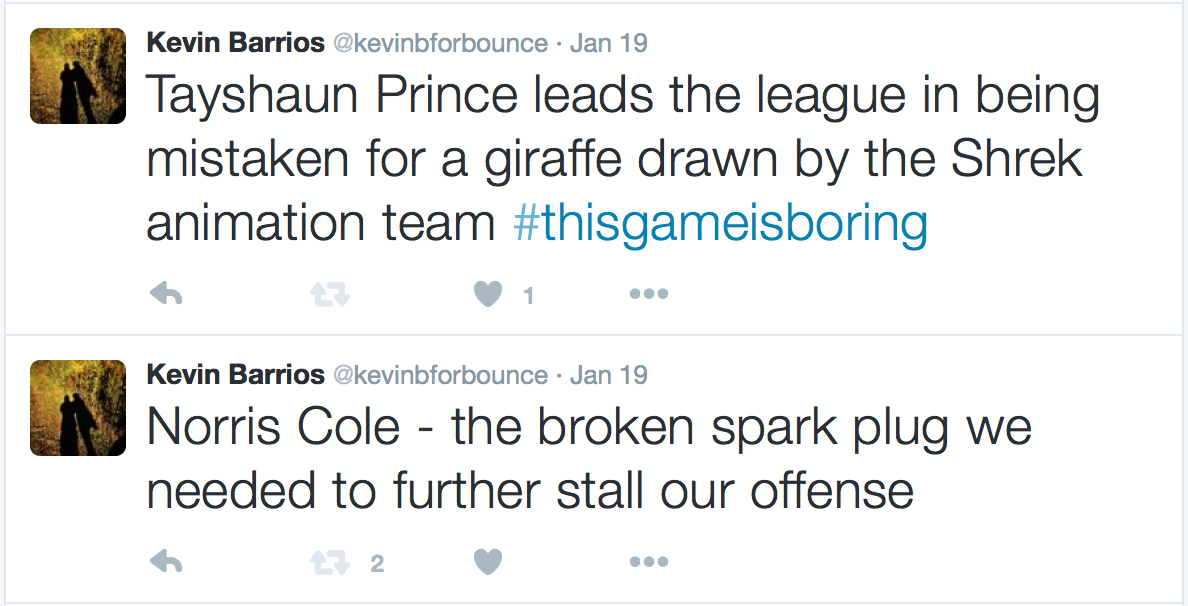 Also, there is a chance that I will do ticket giveaways for home games that my season ticket partner and I can’t make. I have pretty good seats too — behind the Pels’ bench.

Ok, now on to this complicated trade that reshapes the West.

No Longer Quiet on the Western Front

Why the Pelicans do it:

Ryan Anderson is a fan favorite and a solid locker room guy. He provides great floor spacing, and when he’s hot, he can ruin an opposing team’s fan’s excitement over the refillable popcorn bucket. However, he’s an expiring contract and isn’t the best fit for the Pelicans going forward.

New Orleans does replace him with Mirza Teletovic who is quietly having a really nice season. Teletovic is posting a 16.7 PER and shooting nearly 43% from beyond the arc. He’s older than Anderson, but is also cheaper. Mirza isn’t as nimble as Anderson — which seems absurd to say — so you won’t get any nifty spins in the post and you may even see a drop off in defense, but he’ll play his role as a catch-and-shoot artist well without holding the ball. He’ll also require less minutes.

In past years, I’ve had some real crushes on underused guys that I think could be very good players if they were on the right team (the Pelicans), and most often these players have ended up proving their worth. Khris Middleton and Ed Davis are two worthy of mentions, but my current object of affection has been KJ McDaniels. Oleh and I even exchange off-the-record KJ love from time to time — like KJ icing this man bun:

I think he’ll be the anti-Gordon — cheap, athletic, dominant defensively (75.9 defensive rating and a net rating of 26.2) and extremely energetic. He’s not a great shooter at this point in his career, but he’s still young and scores well in transition while also providing an arsenal of dunks — including put-back dunks that you would think only a big man could provide like these:

This trade would also give the Pelicans another player I’ve coveted since draft day — T.J. Warren. Warren could be that small forward New Orleans has needed for seemingly ever. He entered the NBA as a mid-range specialist with a ton of unorthodox post moves and floaters. Check out some of his college highlights here:

However, he has expanded that range so much that he’s shooting nearly 41% from deep this season (and nearly 50% overall). TJ has great size for the three spot — 6’8" and 230lbs. He finishes well through contact and is currently posting a 16.34 PER. He’s still on his rookie contract, which makes him affordable over the next few seasons.

Why the Rockets do it:

This is a drastic restructuring for Houston. They realize they aren’t competing for a title this year, so they start to reshape the team for the future. They get the sharpshooting four they’ve coveted in Ryan Anderson and his bird rights, so they can try to lure someone else while then going over the cap to re-sign Ryno during free agency.

Houston also saves some money by exchanging Howard for Chandler and Ariza for Tucker. Tucker and Rivers become expirings that are low cost in the offseason, which can be used to land larger fish. Houston loves to wheel-and-deal and aim for that coveted free agent, so while they likely take a step back this year, it could propel them forward for a decade. They will surely chase Durant (whom I think will at least sign for one more year with OKC, but Morey will take aim). If successful, pairing Durant with Harden, Anderson and Capella/Chandler would be a contending lineup.

As for the present, they lose Terrence Jones who is a quality young piece, but they’ve seemed intent on moving him anyway. Tucker replaces Ariza on a cheaper contract that becomes expiring. He’s also a stouter defender.

Tyson Chandler becomes the mentor you want for the very promising young Clint Capella and Montrezl Harrell. Chandler provides the defense you lose by moving Howard without providing any of the drama. Tyson’s a much more team first player and can split time with Capella, keeping his minutes down and his effectiveness up as he’s entering the twilight of his career. He’d also be an asset when running pick-and-rolls with Harden.

Why the Clippers do it:

The Clippers are in win-now mode, but have no serviceable three or bench players outside of Jamal Crawford. This move allows them to keep Crawford and land a starting small forward while building a very good bench mob.

Markieff Morris is on a great contract for what he can provide while he is happy. He’s a third big that can play with either of the Clippers starting bigs. He can play the 5 with Griffin at the 4. He can play the 4 with Jordan at the 5. Los Angeles has developed a blood feud with the Warriors and Markieff has shown that he is one of the few players that can limit Draymond Green when going head-to-head. Morris will also likely cherish every opportunity he gets to go at the division rival Suns for the rest of his career.

Trevor Ariza returns to LA (though on a different team) filling the huge hole in a contending starting five. He’s a scrappy athletic guy who has a very effective jab step. He’ll fluster his opponent with physical defense and make them respect his corner three, opening up dribbling lanes for Chris Paul. He’s also a potentent transition finisher.

Cunningham brings his midrange game, his blossoming corner three, his work ethic and his toughness to a team that sorely lacks it. He can provide depth and defense at both the three and the four for the Clippers.

Why the Suns do it:

Phoenix gets some picks and cash to help rebuild after a floundering season. They do give up a big asset of their own in T.J. Warren, but this haul and dumping Morris makes up for it.

Terrence Jones is a blossoming young four that has improved his three point stroke. He provides energy, and best of all, he isn’t a Morris twin.

Pierce gets stabbed in the back by Doc, but he’s bounced back from stabbings in the past.

Speaking of malcontents — the Suns do have to bring in Dwight Howard and Lance Stephenson — which could make them must see TV, but Howard has a player option for next season and Stephenson is an expiring with a team option for next year.

That being said, what if Howard could be sold on Phoenix (I mean who else would really want him at this point)? Sure things are bad now, but next year the Suns will get Bledsoe back, still have Knight and Booker to go along with Terrence Jones and a slew of picks to work with. The Suns’ staff has been known to work miracles for aging and injury prone players, so this could be the destination that Howard and maybe even Pierce need to extend their careers on a higher arc. If not, they walk away with a pick, Jones, some cash and a load of cap room.