Grading the Pelicans first quarter of the season

And answering which direction New Orleans should proceed from here.

Share All sharing options for: Grading the Pelicans first quarter of the season

If you have ever seen the movie Love Jones then you know that romance "is about the possibility of thing" as main character Darius Lovehall famously declares. If you haven't seen the movie then you have no business reading a Pelicans blog; go watch the movie, trust me you'll be far more entertained. What Lovehall was trying to say was that in many ways the best part of a new romance is not what is, but what might be. The possibilities are endless before the banality of everyday life creeps in and exposes our love interest for what they are, warts just as pronounced as all the things you love. Before opening night of the 2015-2016 NBA season, New Orleans Pelican fans were awash in a basketball romance. We envisioned a fast paced, free flowing, ball moving, Golden State lite offense to go with an improved defensive scheme brought by former Boston Celtics assistant Darren Erman. Fans felt that Alvin Gentry would sprinkle the franchise with magical Warrior dust and unlock the potential that lay just beneath the surface.

What we got instead was a somehow stagnant fast paced offense disjointed by a myriad of players moving in and out of the lineup due to injuries. The defense we were so excited to see was ripped to shreds by the most mediocre of competition. It takes any newly installed defense time to gel and Gentry's fast paced offense ironically compounded the defensive issues by giving opponents more opportunities to score on the Pelicans Saint-like defense. Finally, the Pelicans began getting some players back including returnees like Tyreke Evans, Norris Cole, Alexi Ajinca, and Omer Asik. Once again, fans courted the idea that perhaps the return of these players would bring about at least some of our delusions.

Alas, Tyreke Evans, for all his talents, still pounds the ball like a New England Patriots ball boy, Omer Asik has carried his poor playoff series right into the regular season, and the rest of the cast looks just as out of sorts. All of those factors add up to a very underwhelming 5-16 start to the season. To be fair, no team has been as ravaged by injuries as New Orleans. However, even that fact doesn't make sharing elbow room in the standings with the likes of the Nets and Lakers any easier.

If I had to give the Pelicans first quarter of the season a grade it would be a D. The only thing that prevents me from giving them an F are those aforementioned injuries, for which you have to give them somewhat of a pass. The team has simply not played very well regardless of what players have taken the floor. There has been no real measurable difference since they began getting injured players back (at least not if your unit of measurement is wins). So is there any reason for hope going forward?

Basketball isn't played in a vacuum and unless your name is LeBron James you can't just throw players together and expect it to work. While the Pelicans are relatively healthy at this point, the players have not played together in the new offensive and defensive schemes for very long. Add to that the facts that Jrue Holiday essentially didn't play basketball last year and doesn't practice much this year, you can start to see a universe in which the Pelicans begin to gel as the season goes along. With that, I'll make a few predictions for the second quarter of the season:

After Monday's loss to the Boston Celtics, Tyreke mentioned that he's still trying to figure out how to play in Gentry's system which doesn't really fit his ball dominant (my translation) style of play. The comment immediately piqued my interest. Later Gentry was told about Tyreke's comments and he said they would just have to find a way to make it work. I don't know about you, but anytime I've been in a relationship and we start talking about "making it work," the end is nigh. Making it work implies that it does not naturally work and this team (especially GM Dell Demps) does not have time for a prolonged ramp up.

Gentry's offense is based on ball movement, spacing, good shooting, and players moving without ball. Do any of those core tenants remind you of Tyreke Evans? Nope. For all the rumors of a Ryan Anderson trade, I think it is far more likely that Evans has a new address by the All-Star break than Anderson. Evans has one year at just over 10 million dollars remaining on his contract after this season. That is very reasonable for a player of his talent level. 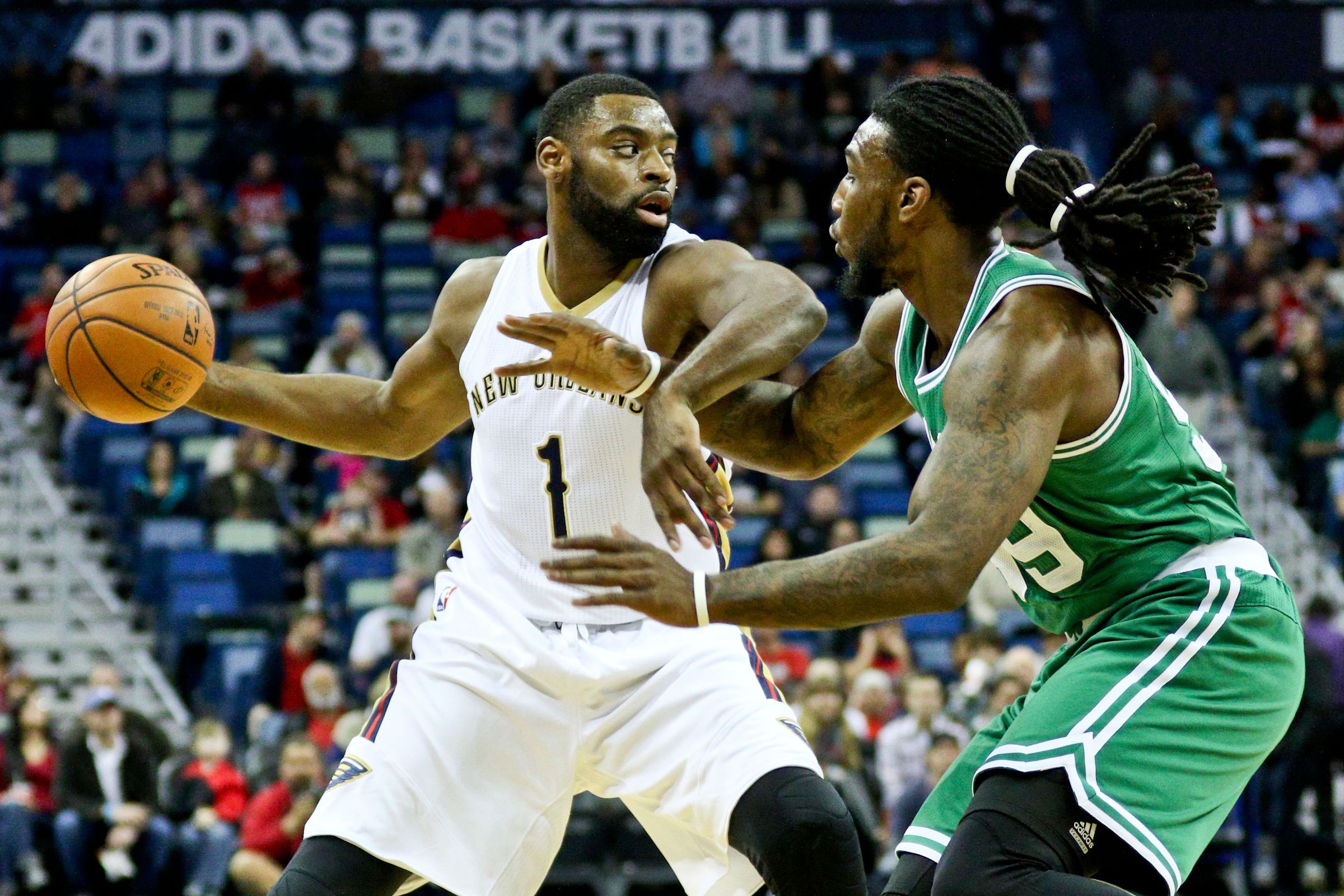 Any Evans deal would likely be for a veteran who doesn't mind moving the ball around like say George Hill from the Indiana Pacers. But of course predicting a trade like that isn't any fun. What if Dell is in full panic mode and tries to pull a trade for Carmelo Anthony to save his hyde. With Anthony disgruntled about the hopeless Knicks, he might be willing to waive his no trade clause for the chance to work with Anthony Davis despite the Knicks actually having a better record (sad face).

Carmelo could probably be sold of having a better chance to win with Davis and company long term. Of course this would kill the Pels flexibility going forward, but any hopes of getting Durant this off-season have crashed and burned under the weight of the Pelicans terrible start. Besides, if Dell is trying to save his job, he won't be worried about what happens 4-5 years from now. Something like Evans and Gordon for Carmelo and trade filler allows the Knicks to dump the star's salary while being able to claim that they got some talent for him as well as additional cap space to fuel their rebuild.

Much has been made of Jrue Holiday's poor play so far this season. Holiday is worse than he was the previous two years by almost every measure. However, it's not really fair to judge Holiday at this point in his return. Holiday appeared in only 40 games last year and spent the entire off-season rehabbing is injury rather than training for the season. In addition, Holiday had very little participation in training camp and still does not participate in practices for the most part. Can you imagine playing in the NBA without training in the off-season or practicing in the regular season? 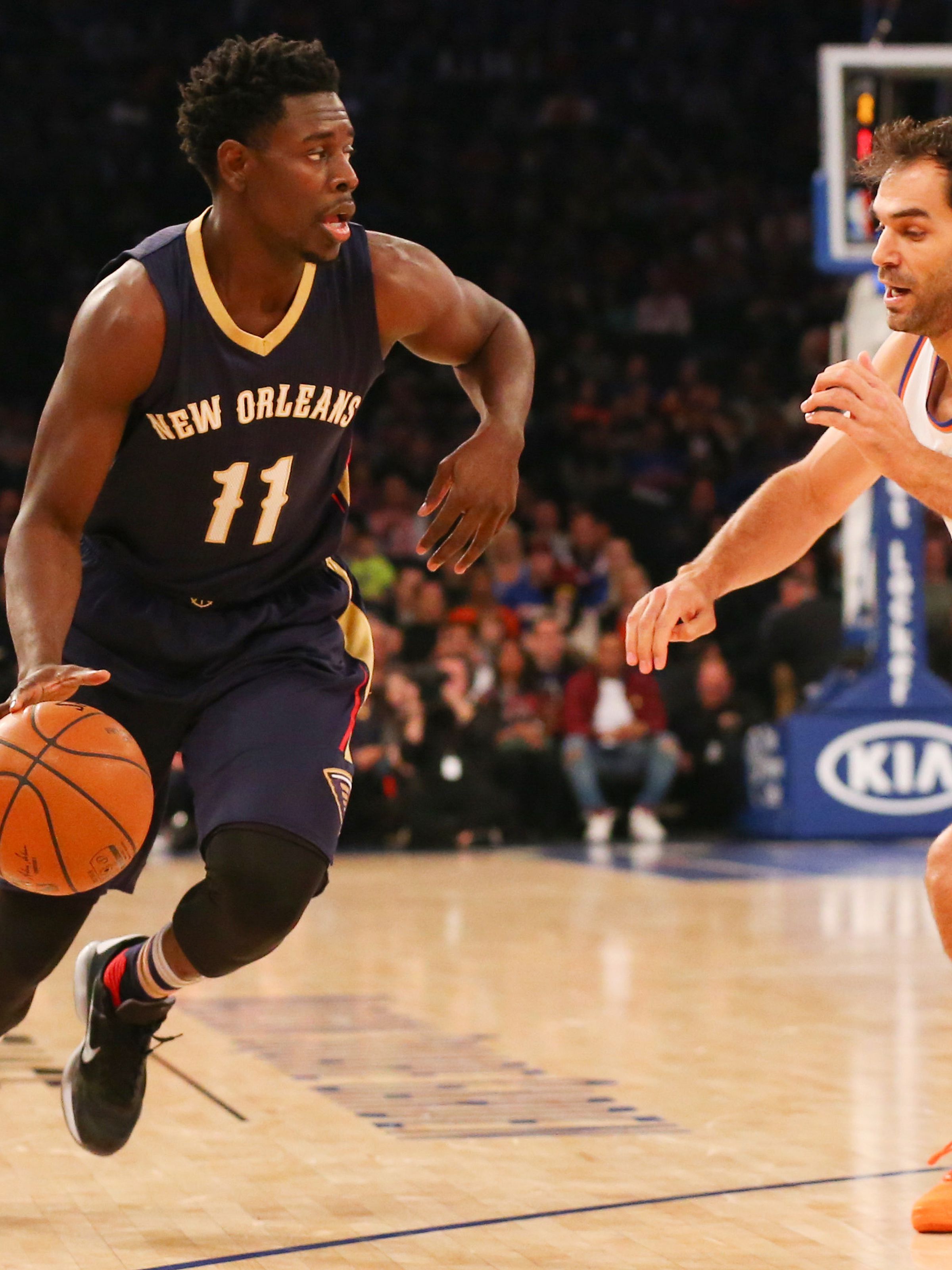 I think Holiday will get back into the groove of things as the season rolls forward. If the Pelicans make good on my first prediction, they will be counting on Holiday to pick up the slack. In a way, this is also dependent on Quincy Pondexter returning to form, or Norris Cole improving his play. Holiday generally plays better with a secondary ball handler on the court to take the pressure of him and keep his turnovers down.

Pelicans Go 8-12 During the Second Quarter of the Season

I'm generally an optimistic person. However the New Orleans Pelicans have taught me that I should almost never overestimate their ability to disappoint me. While I think there will be improvement in the next quartile of the season I also know this team has a long way to go in terms of learning how to play together in the new scheme. In my estimation Davis will be Davis, Holiday will improve, Evans will continue hogging the ball, and Gordon will continue to be a non-factor for anything other than 3pt shooting.

When General Manager Dell Demps built this team he envisioned a young athletic team that could grow with Anthony Davis. Demps doubled down on that bet this summer by bringing the whole gang back for another campaign. Maybe he's just had bad injury luck, but regardless, the franchise no longer has time to wait on the existing roster to finally get it together. Dell has got to be feeling the pressure at this point, and anything short of a playoff berth, which looks more and more unlikely with every passing loss, almost assuredly will cost him his job.

With Demps' job hanging in the balance, Pelicans fans are left to wonder what rash decisions he might make during his death throes. If Dell has any hope of saving himself he will have to make something happen soon to justify his continued presence with the organization. The sense of urgency couldn't be higher in the front office on Airline Dr these days (for both NOLA teams). For Demps a mid-season turn around is his only out at this point, and that's urgent like a motherf@#ker.