At the end of last year I took a look at Anthony Davis's rookie year in the context of the two greatest power forwards of the previous generation; Tim Duncan and Kevin Garnett.

As I stated then, Kevin Garnett is a better comparison physically. Their body types are much more similar, especially when comparing their sophomore seasons. If anything going into their third year as a pro AD is bigger than Kevin Garnett. While Davis continues to work on his post game his body type and athleticism lends to a different type of game than Tim Duncan.

Thanks to the advancements at Basketball Reference we can compare these players in a pace-neutral environment. All non-percentage stats below are in terms of production per 100 possessions.

Stats thanks to Basketball Reference

By nearly every single metric Anthony Davis is the superior sophomore. Davis scores more points on fewer shots. He collects a higher percentage of rebounds, blocks more shots, creates more steals, and turns the ball over (far) less than two of the greatest power forwards in NBA history. Let's compare these players' shot charts and see where Davis is creating this efficiency advantage.

Where They Make Their Money 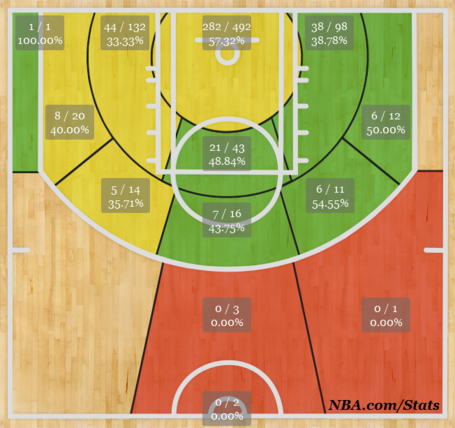 First a plea, please do not focus too much on the specific colors of the NBA shot charts. Tim Duncan worked on the blocks or near the basket as a sophomore. 90.5% (765/845) of his shot attempt came within 16 feet of the basket. He did shoot an impressive 43.8% (32/73) beyond 16 feet (but inside the three point line). Jump shots were not a big part of his game though. It is interesting to note that while he worked on the left block far more frequently than the right side, he was much less effective. 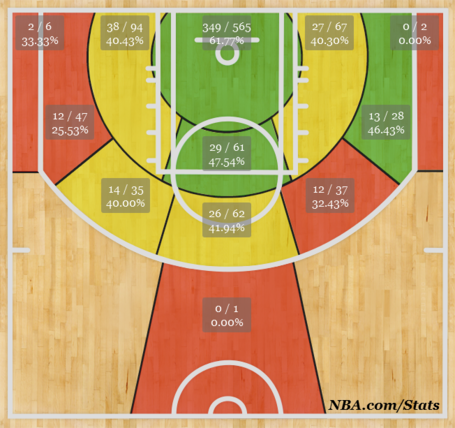 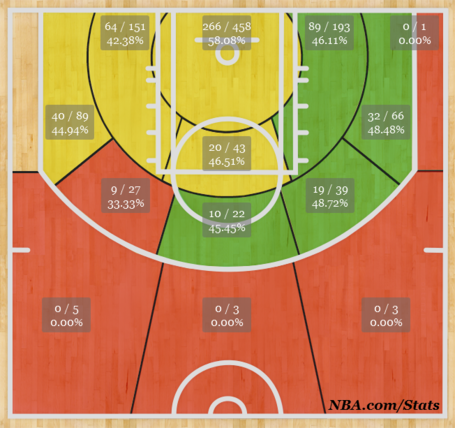 Garnett shot even more often from beyond 16 feet than Davis, attempting 21.9% (241/1100) of his shots as long twos. KG was also supremely effective from that range, knocking down 45.6% of his attempts. Like Duncan, Garnett did not get all the way to basket. Just 31.18% (343/1100) of Garnett's attempts came within three feet of the basket. He also converted at a lower rate than Davis, shooting 62.1% at the basket.

Davis continues to impress with Team USA and will be suiting up in New York tonight to play the Dominican Republic in another exhibition game in preparation for the FIBA World Cup at the end of the month. If the highlights of Davis abusing Tiago Splitter were not enough this summer; on Tuesday's Black and Blue Report Dell Demps dropped this interesting nugget.

Davis putting on weight is about more than my desires for him to play center full time. First, remember that Anthony Davis is just 21 years old, still growing into being a man. He has said that he might not be done growing taller and his wingspan according to some team materials may have increased by over two full inches. Second, the weight gain is also about staying on the court.

"(My improvement) from Year 1 to Year 2 was all confidence," Davis explained. "I had to be more confident in myself and in my game. I had to trust that all the work I had been putting in was going to pay off. Year 2 to Year 3, I just want to get better. All my numbers I had last year, I want to see increase. I want to try to stay healthy and play at least 75 games. When I’m healthy and the whole team’s healthy, we’ll be a playoff team. We definitely had the pieces we need to be that team. Unfortunately last year, we were all hurt. I think that’s going to change. It starts with the offseason right now, getting stronger, better and working on your game."

Putting up a PER of 27 or greater has occurred just 79 times in NBA history. Only two players (Shaquille O'Neal and LeBron James) have done so in their age 21 season.

Both players cleared a PER of 28. Both played on teams that won 50 games. Most importantly, both made the playoffs.