Share All sharing options for: Bird Feed: Heat and Thunder Looking at Morrow

We'll start with a couple of Russ Smith articles for your Fourth of July pleasure. The first is a great discussion of Russ Smith's skills on offense and defense - I particularly think this is a spot-on description:

He's best as an on-ball defender, and is particularly adept against the pick-and-roll. It's weird to think that, given his size and scoring ability, it's Smith's defensive ability that will likely make more of an impact on the NBA level.

Even though he's a small guy, I expect Russ to be used primarily for his defense. The Louisville Courier-Journal has been really excited to write about Russ (as have Louisville fans, we've learned). They report that Russ Smith and Anthony Davis are both friends with Wayne Blackshear, a Chicago native that played with Smith at Louisville. When asked what he thought first about New Orleans when learning the Pelicans had traded for him, Russ said, "Lil Wayne and Anthony Davis." We'll take it.

Anthony Morrow is a popular guy this offseason, apparently:

Word is both Heat and OKC Thunder are chasing Morrow. As was Orlando, I'm told, until Magic secured their deal with Ben Gordon as well

I doubt either of those teams would give Morrow any more than the MLE. That would be a steal however, compared to some of the contracts that have been flying around to start free agency (see: Meeks, Jodie).

Another day, another great Zach Lowe article - this one has a short passage about players in the bargain bin of free agency, like Darius Miller and Al-Farouq Aminu. Here's Lowe on Aminu:

Someone should make a small bet on Aminu, by the way. He can't shoot and he's sort of spacey at times, but he rebounds like a beast, runs the floor well, and plays hard on defense. He can has shown flashes of improved passing and dribbling amid mostly harrowing on-ball play, and he can work as a stretch power forward.

Aminu is only turning 24 next season - if a team nabs him at, say, 4 years, $16M, that might wind up being a great contract in a few years.

And finally, Eric Gordon's younger brother, Eron, is a highly ranked high school recruit and is looking at Kentucky, Michigan, and Duke. I really only mention this because this photo will generate a huge eye-roll from New Orleans basketball fans: 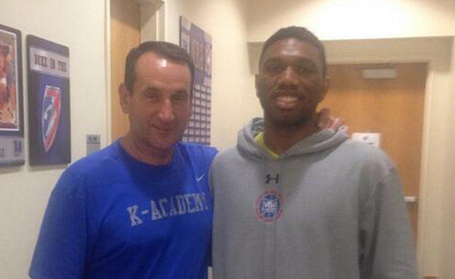