Who will Monty Williams play? When?

Share All sharing options for: Monty's Rotation - A Projection

Deciphering what Monty Williams intends to do with the lineup this season is incredibly difficult. First, and most obviously, he has never coached this specific group of players. How those players fit together is currently unknown. Secondly, the great deal of the core was here last year, but rarely healthy. Anthony Davis and Ryan Anderson played in just 15 total games together. In six of those they started side-by-side. There is no reason to expect they will start together deliberately this season.

It could be projected, for instance, that Monty will use Omer Asik in a similar role to what he used Robin Lopez two years ago. Two years ago Anthony Davis was a rail-thin rookie who played center just 3% of the time according to Basketball Reference. Last season that number jumped to 42%. However, some of that time Ryan Anderson was in the lineup with him. Despite being considered the "center" on the court Anthony Davis during these periods rarely defended the center position.

Another big problem with projecting these lineups is the tiny sample size of competitive games when Davis and Anderson were both healthy. By my count just six games fit that description. 105-98 vs Utah, 104-100 at Cleveland, 101-102 vs Golden State, 107-110 at Portland, 98-107 at Houston, and 110-108 vs Portland. Ryan Anderson starts half of those games.

Giving an exact rotation of when Monty will bring players in and out is nearly impossible. Monty Williams himself does not have an accurate projection yet. Given previous history it is possible to give likely minute ranges for individual players and then attempt to cobble those totals into something approximating a "rotation". Let's give it a go, starting at the top.

This is the franchise right here, the cornerstone. Last season despite battling injuries (Davis left five different games with injures before accruing 20 minutes played) he averaged 35.2 Minutes per Game. With the addition of Omer Asik the expectation among many is that protection will allow Davis to play more often. This does not mean, however, that Davis will not play "center" (as reference above) at all.

Holiday has played between 33 and 37 minutes per game every season except his rookie year. It is no secret that the Pelican front office, and Monty Williams specifically, values ball pressure from the point guard position. The high cost of acquiring Jrue Holiday and the recent trade for Russ Smith are two highlights of this philosophy. While Jrue Holiday will be considered the point guard whenever he is on the floor, the does not necessarily mean the offense must initiate through his hands.

Monty Williams said in the Black and Blue Report on Thursday that he does not expect to play a "prototype small forward" much due to the flexibility created after acquiring Omer Asik. Along this thought process it may be portending Tyreke Evans starting at small forward. It might be best for the Pelicans to do that and rotate Evans in and out in much the same way that Eric Spolestra uses Dwyane Wade. Wade, while a starter, usually (during the regular season) is subbed out early in the first and third quarters and reinserted to steady the bench unit. While with the bench Evans would be nominally the shooting guard while initiating much of the offense.

Asik has just one season as a starter, his first in Houston. That season Asik played 30 minutes per game while averaging a double-double. Asik's minutes predictably decreased this season with the addition of Dwight Howard. Unlike the three previous players whenever Asik is on the court his role is unquestioned, he is the center. Defensively and on the glass he is elite. Balancing his offensive role when paired with Davis may be more difficult than with Anderson. Asik could clog up the lane and limit Davis' effectiveness in the pick and roll.

Ideally Monty Williams wants to stagger Anderson, Davis, and Asik in a way that two of them are on the court at all times. All three players should player around 30 minutes a game (with Davis logging many more). With just 96 minutes to split between the three the Pelicans could have a consistent advantage in the front court. Ryan Anderson averaged right on 30 minutes per game his first season in New Orleans platooning with Davis (averaged just under 29 as a rookie) and Robin Lopez (who averaged 26). His recovery from April's cervical surgery could place limits on his availability. Davis may be required to defend centers when paired with Anderson to limit the wear and tear.

It is difficult to find Gordon fans among the Pelican faithful. While Gordon has played more games in each season in New Orleans he has also done so with decreasing effectiveness. Rumors out of Gordon's camp are he is finally completely healthy. Certainly videos of Gordon deadlifting 352 pounds with relative ease are not a negative. Gordon, like Asik, will always be a shooting guard when he is on the court. If (and that is an enormous if) Gordon is truly back to 100% and has not permanently lost the explosiveness demonstrated with the Clippers this minute allocation could increase.

Every season it seems Monty Williams has his "veteran" that plays much more than any fan would prefer. Salmons is the leading candidate this season. James Ham of ESPN True Hoop's Cowbell Kingdom was on the "In the NO" Podcast for Bourbon Street Shots and had a lot of nice things to say about Salmons. Salmons is very professional, he takes this job quite seriously, he will be in excellent shape, and he can mentor younger players behind the scenes. If Salmons can continue to hit catch and shoot threes while playing serviceable defense I think fans (including myself) will come around on Salmons. If not, it could get ugly quick.

The Pelicans have invested a lot of time and effort into Rivers. Oleh covered a lot of Rivers' improvement in the season recap. Rivers averaged 19 minutes per game last season. First he alternated as the back up point guard with Brian Roberts, then he became the de facto backup after Jrue Holiday went down. Roberts is gone and Russ Smith is a rookie, albeit a rookie who is a year and a half older than Austin. The NBA takes time to learn and Rivers appears to be the backup point guard to start. Jimmer Fredette and Russ Smith will both challenge for these minutes.

Very tentatively I think that Darius Miller will be given the first crack at these minutes. Babbitt has shown he is a better shooter than Miller so far, but Monty Williams has demonstrated that he values defense over shooting. If Miller can both continue to improve defensively and maintain his confidence shooting the open shot when available he should put a strangle hold on this last rotation spot. Oleh's recap focuses in on a promising stretch to end the season.

Putting it All Together

Foul trouble and minor injuries mean the rest of the roster will still get chances to showcase their talents on the court. If everyone is healthy it seems most logical that Monty Williams will stick to roughly a nine man rotation. I cannot see how he regularly plays four big men without diminishing the effectiveness of the Davis-Asik-Anderson trio.

Below I have created a hypothetical rotation within the above minute limits. For simplicity sake each portion is divided into three minute segments. In the first and third quarters there is a mandatory media timeout under six and three minutes. In the second and fourth quarters there is an additional media timeout under nine minutes. I assume below that each substitution occurs at those points in time. 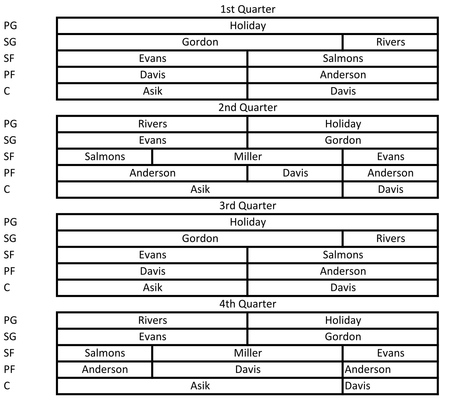 Holiday and Davis playing the entire first and third quarters has the chance to be problematic due to foul trouble. Under the above scenario, the minute allocation would be:

If you want a different outlook on how Monty might do the rotation Michael McNamara has a great piece up on Bourbon Street Shots. He projects some different things. Gordon, not Evans logs heavy minutes with the reserves. Davis plays more with Ryan Anderson and Asik plays slightly fewer minutes overall.

One way to look at this team is that they have six starters with Davis, Holiday, Evans, Gordon, Asik, and Anderson. Another way to look at it is they have no starting-caliber small forward.

Individually the franchise lacks a player to defend LeBron James, Kevin Durant, Carmelo Anthony, and Paul George. Within the division Chandler Parsons and Kahwi Leonard jump out as threats. Guarding these players was often assigned to Al-Farouq Aminu. While Evans, Salmons, Miller, and possibly (eek) Babbitt may get a shot at the assignment, this season it must be a collective effort defensively.

The remaining six players under contract (Alexis Ajinca, Luke Babbitt, Jimmer Fredette, Russ Smith, Jeff Withey, and Patric Young) will play this season. Garbage time, foul trouble, injuries, or specific match ups will all play a part. Generally I prefer Austin Rivers over Jimmer Fredette at back up point guard because of his defensive abilities. Against teams weak at that position (or teams with a smaller back up) the shooting and mid range potential of Fredette might win out. Ajinca is probably going to be the fourth big, but every minute he plays is a minute three superior big men (Davis, Anderson, Asik) cannot.

Dell Demps has done his job, for better or worse. The success of this collection of basketball players now falls on Monty Williams' shoulders. Dividing up accolades (or blame) comes after.