What else could the Pelicans have done with those assets

A couple weeks ago Jimmy Smith was at it again, bashing the Jrue Holiday trade. Rather than have you click through to his diatribe I will post the first few paragraphs for your information.

Though the fan base longingly hoped otherwise, the New Orleans Pelicans had zero hope of winning the NBA draft lottery this week, the mathematical 4 percent chance notwithstanding.

The Pelicans had mortgaged their immediate future a year ago when the team overpaid for point guard Jrue Holiday, foolishly adding a second No. 1 pick – this year's – to the mix along with last year's choice (Nerlens Noel) in the draft-night trade that brought Holiday to New Orleans from the Philadelphia 76ers.

The Pelicans then worsened the deal by hedging the bet and only making this year's No. 1 a top-5 protected choice.

First, Jimmy Smith does not understand how the lottery works. Imagine, for instance, how the Pelicans can "zero hope" of winning the NBA draft lottery with just a 4.0% chance of landing in the top three. However, the Cleveland Cavaliers, with a 1.7% chance of winning the first pick, actually did so. 4%, in my history of understanding basic concepts like numbers, is greater than 1.7%. Evidently, Jimmy Smith disagrees with such an obvious fact.

Second, how did the Pelicans possibly make the deal worse by "hedging the bet and only making this year's No.1 a top-5 protected choice"? Either Jimmy Smith is saying that offering protection is a bad thing (absurd) or that he has direct knowledge of the negotiations and the Pelicans offered top-10 protections, the Sixers agreed, and the Pelicans just decided top-5 was fine with them. Which is it? Who knows. Trolling gets clicks, and Jimmy Smith is in the business of seeking those clicks.

Let me lay out my biases for you straight away. I firmly believe that the Pelicans are a better basketball team with Jrue Holiday on it in place of whomever they would have selected with the sixth pick last year and the tenth pick this year. This is my opinion, and I understand that many might not share this opinion. Bill Simmons is chief among those who disagree. I base this on Simmons's own reasoning, that larger pieces of currency are typically more useful to a basketball team than change which equals a similar sum. In this case, I believe Jrue Holiday is a dollar, and the two draft picks are more likely to be eighty-five cents in change.

Smith stops with his "analysis" there. The team would be better with the sixth and tenth pick, they are in need of talent, and nothing screams "talent" like players who have never played a game in the NBA. A draft pick is a blank slate on which all kinds of wishful thinking can be drawn upon. Julius Randle is Zach Randolph. Aaron Gordon's floor is Shaun Marion or Tony Allen. Jabari Parker is going to be the next Carmelo Anthony.

What if Julius Randle turns out to be the next Marcus Fizer? Do you even know who that is or that he went fourth in the NBA draft just fourteen years ago? What if Aaron Gordon is the next Al-Farouq Aminu? Of course Gordon is not nearly as long and cannot shoot half as well at this point in their lives. What if Jabari Parker is the next Corey Maggette? Teams with draft picks draw up their "worst case" scenarios to still sound great; that means they probably are not even considering an actual worst case scenario.

For a quick primer on the economic concept of opportunity cost in the NBA, I highly suggest reading this article from Nick Lewellen at Bourbon Street Shots.

There is a solid argument against the Jrue Holiday trade though, and I am going to go at length to explain it. Step one is determining what the Pelicans would do with the sixth pick if they did not trade it. Everything reported at the time suggested that was the case. NOLA.com noticed the trend of the mock drafts. Rohan even has a "The New Orleans Pelicans Select Trey Burke With The 6th Overall Pick" still sitting in our editorial queue as I write this very piece.

Trey Burke came out of the gate with a broken finger, missing the team's first twelve games. He also struggled all season long converting shots, shooting just 38% from the floor and 33% from behind the arc. Burke did excel at taking care of the basketball, turning the ball over on just 12.2% of possessions according to Basketball Reference. His shot chart, as you will see below, was not a very pretty sight. 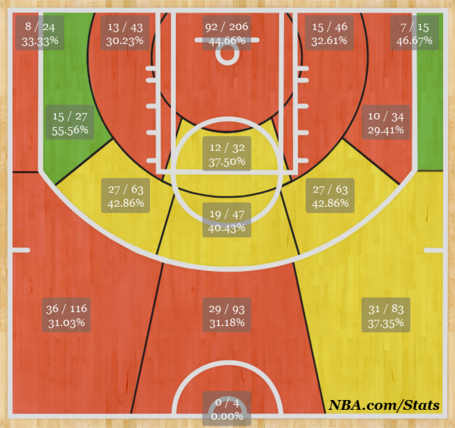 But again, this is not just about Trey Burke, it is about all the other dominoes drafting Trey Burke would effect. First and foremost is the acquisition of Tyreke Evans.  The Evans trade sent out both Greivis Vasquez and Robin Lopez in order to make salaries match as I outlined on July 4th. Portland sent Sacramento two second round picks, the Knicks' 2016 second round pick (protected 31-37) and swap rights for Portland's second round pick (which only makes sense if Sacramento's pick is worse than Portland's). In essence, a pile of garbage for helping the trade work.

In the alternate reality of drafting Trey Burke, the Pelicans do not need to send out any salary whatsoever.  They could sign Tyreke Evans to the same contract outright instead of negotiating a sign and trade. Let me demonstrate.

Now, instead, I think it is most logical to assume that the Sacramento Kings would like to bring Vasquez in. He was eventually an asset used to trade for Rudy Gay later in the the season after all. So Vasquez is out, and Tyreke Evans is in. In this scenario last summer the Pelicans would have had roughly $3.3 Million in cap space, the room exception (which was used to sign Greg Stiemsma), and the ability to sign players to minimum contracts (how Anthony Morrow was brought on board). They also have not re-signed Al-Farouq Aminu (he ultimately agreed to a $3.7 Million one year contract).

Going beyond this point is purely hypothetical, but I think we can make a couple reasonable assumptions. First, the team with Robin Lopez on board would not spend the room exception on Greg Stiemsma. Both players are centers, Robin Lopez even last summer was a much more highly regarded player. Second, the team would still desire to sign Anthony Morrow to a contract. The lack of depth and shooting on the wing remains just as apparent.

How the Pelicans would have used that $3.3 Million in cap space and the $2.6 Million room exception is an area for debate. Trading for Jrue Holiday meant Robin Lopez had to be included in the trade for Tyreke Evans and the center position became one of intense need. This is just a portion of the opportunity cost of trading for Jrue Holiday.

We cannot say exactly where the Pelicans first round pick would have been with the above roster, or as I mention, who the Pelicans might have signed. $3.3 Million in cap space is more that what Dorell Wright signed for in Portland or Chris Copeland signed for in Indiana.  Simply offering more money is not a guarantee of signing a free agent in the NBA. For the sake of this discussion, let us assume that whoever the team signed with those two assets would not be under contract for next season. This is reasonable, as Greg Stiemsma (the room exception) and Al-Farouq Aminu (brought back on cap space last summer for $3.7M) are both free agents this summer.  What would the situation look like right now, if the Jrue Holiday trade had not gone forward?

This is where the opportunity cost (what else the Pelicans could have done with the assets necessary to acquire Jrue Holiday) comes more into focus. It is not just because Jrue Holiday takes up a "ton" of cap room, and it certainly is not because we can project Dario Saric, Aaron Gordon, or James Young to definitively "solve" the small forward position (taken from the most recent Draft Express Mock Draft, picks 9-12). No, the cost is what else the Pelicans could have done with that draft pick and cap space.

Could the Pelicans package their late 2014 lottery pick and Eric Gordon for a large expiring contract like Carlos Boozer's, or Amar'e Stoudemire's? Either move opens up max level cap space next summer. Could they send the 2014 First Rounder and Eric Gordon to Detroit to pry away Greg Monroe or to Milwaukee to snag Larry Sanders? That of course creates another asset in Robin Lopez to be moved and potentially (in the case of Sanders) more cap space. I am still not enamored with the free agent class (beyond Monroe). However, the Pelicans did sacrifice some level of flexibility by trading for Jrue Holiday.

This is the real argument against the Holiday trade. Look at these two different stacks of assets.

Which stack of assets could Dell Demps most likely turn into a playoff team next year? Does Tyreke Evans play point guard? Does Trey Burke develop more quickly than he did in Utah? Does Ryan Anderson's injury take place? Could Demps move Eric Gordon with the carrot of the 2014 First Round pick?

Here it is important to remind everyone that a ton of such late lottery picks are on the trading block right now.

After pick No. 5, however, things are much more fluid. Sources say the Boston Celtics, Los Angeles Lakers, Sacramento Kings, Charlotte Hornets, Timberwolves and Phoenix Suns are all open to offers.

While the Celtics, Lakers, Kings, Hornets, Wolves and Suns aren't likely to get All-Stars for their picks, they should be able to score players or multiple assets to help their teams right now. Look for the Bucks, Hawks, Mavs, Blazers and Raptors to be especially busy trying to move up or acquire a second pick.

At the time of the Jrue Holiday trade everyone loved the 2014 NBA Draft class. It was the deepest since 2003. Now, after panning Dell Demps for trading the (eventual) 10th pick we learn to find out the sixth, seventh, eighth, ninth, thirteenth, and fourteenth are on the market. Let me jump back to that Chad Ford quote really quick.

While the Celtics, Lakers, Kings, Hornets, Wolves and Suns aren't likely to get All-Stars for their picks, they should be able to score players or multiple assets to help their teams right now