Ryan Anderson Should Not Be Traded

More than just "a shooter"

Share All sharing options for: Ryan Anderson Should Not Be Traded

In the past six months I have traded Ryan Anderson in hypothetical scenarios a number of times. Those trades have always focused on the Pelicans acquiring a more traditional center in return, specifically Greg Monroe or Larry Sanders. There is a specific reason I have pursued this line of thinking, and that is my perception of what Monty Williams wants this franchise to be going forward. Through his rotations and comments to the press I have come to the conclusion that the team would be best served to turn their most valuable asset not named Anthony Davis into a center.

Now, I am here to tell you that I am wrong.

NBA Coaches have a very short shelf life. Monty Williams has been the coach in New Orleans for four seasons. There are just FOUR coaches in the entire league who have been in place longer; Gregg Popovich, Erik Spolestra, Rick Carlisle, and Scott Brooks. You may notice that all four have made the NBA Finals and three of the four have won an NBA Championship. Despite this, Scott Brooks is still reported by some to be on the hot seat.

Thirteen new head coaches were hired last summer, and already two (Maurice Cheeks and Mike Brown) have been replaced. This off-season seven different teams must replace their head coach, six have already done so. Monty Williams is under contract through 2016-17. Dell Demps is in the last year of his contract. If the Pelicans fail to make the playoffs this season many reports suggest Demps will not be brought back. The history of new GMs retaining old head coaches, as one might suspect, is very spotty.

In order to remain employed Demps and Monty must work together, and Monty must evolve. If you have followed along with Bourbon Street Shots' "Glory Days" feature, a theme there is that Monty's rotations on the whole were much better when he had all the important pieces available. Anthony Davis and Ryan Anderson started beside one another for six consecutive games and the results were promising.

If Demps and Monty fail to evolve, their time in New Orleans will end. A new front office team will have a better opportunity to build quickly if provided Eric Gordon's expiring contract, Ryan Anderson's deal of a contract, and the 2015 1st Round Pick than if those assets have been flipped into a traditional big man. The NBA continues to evolve beyond a traditional two big man lineup, Anthony Davis will be eligible for a maximum extension next summer. Does a new front office really want $28+ Million tied up in a "traditional" front court or the next three years? How much could that set a rebuild back?

If we as Pelicans know anything, it is that Anthony Davis is not going anywhere. Watching the NBA Finals everyone saw the benefits of having shooters to create space on the court. Ryan Anderson is not just a shooter. He is an elite shooter with a lightening quick release. He is also 6'10" and willing to guard the biggest centers in the league, DeMarcus Cousins and Dwight Howard. In two games both of those big men each racked up 24 points; they also combined for 12 turnovers.

Just a shooter sounds like another wing player who can knock down open shots. Ryan Anderson is so much more than that. Anderson led the entire NBA in makes and attempts beyond the arc in 2012, he finished second behind Stephen Curry in 2013. Anderson is not just shooting some three point shots, he averages seven attempts per game since arriving in the Crescent City. The entire team last season averaged just 15.9 attempts, in large part thanks to the absence of Anderson. 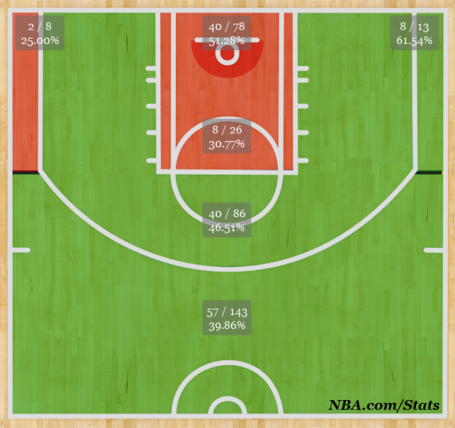 The assumption has long been that Ryan Anderson must have his shot created for him. As with most volume three point shooters, a great deal of his three point makes (98.5%) were assisted according to Basketball Reference. However, when ran off his spot Anderson still found ways to score. Digging into those shooting statistics you find that Anderson shot 52.7% from mid range (16ft to the three point line) while being assisted just  44.8% of the time. This performance carries over to the NBA Stats SportVU tool, as it shows Anderson shooting 46.3% on "Pull Up" shots.

The catch and shoot is a place where I have lamented the Pelicans performance. Not in their ability to make them, but their ability to create them. New Orleans was 25th in the league in catch and shoot points per game. Creating these opportunities is the function of ball and player movement. This is an area where Ryan Anderson excels. He led the entire NBA in catch and shoot three point attempts per game at 6.5. The next closest attempted 5.5, that is a relatively massive difference. Sort that same list by three point percentage and Anderson is the only PF/C making more than 40% of his attempts beyond the arc.

Ryan Anderson is not just a shooter. He is probably the best shooter 6'10" or taller on the planet. In an NBA that values shooting, getting the best big man shooter for $8.5 Million is not a deal, it is highway robbery.

Ryan Anderson just turned 26 years old. He has been in the NBA six seasons. In each of those six seasons his point per game average has increased. Last year he posted his best three point percentage of his career (40.9%) while taking the most three point attempts he has per game (7.5). His turnover rate of 5% is downright preposterous.

Anthony Davis might not be a center full time yet for Monty Williams, but the bigger he gets the more comfortable Monty will be playing these two together. Davis is up to 238 according to the most recent reports and might even be growing taller. If you remember last summer was filled with similar reports of weight gain for the Unibrow. All AD did then was turn in the greatest season for a 20 year old in NBA history.

We can point to specific data points to prove this comfort level is growing. In 2012-13 Ryan Anderson and Anthony Davis played 11.4 minutes per game together, and according the NBA Stats posted an atrocious negative 10.3 Net Rating. This season Anderson and Davis shared the court 21.6 minutes per game, posting a much improved 6.0 Net Rating. Defensively the pairing went from untenable (115.0) to horrible (109.4). On offense, however, the pairing went from average (104.6) to melting your face (115.4).

Pelicans fans do not have to hope that Anderson and Davis will play together more often, they can look at the data and see that those two are playing more together. Not only are they playing together more, they got better doing so. Continued defensive improvement should be expected, as Davis was a much better defender at the end of the season than at the beginning. Kevin Hetrick wrote a fascinating article on the progression of big men over time for Got Buckets. I want to highlight two paragraphs from that analysis.

On defense, the inverse is true. The Big Men dominate the approach to impeding the other team, including the pick & roll. Obviously, the guard needs to anticipate the pick and fight around it, but there is only so much growth that can be done there. Perhaps that is why the defensive aging curve for Guards didn’t form a strong upward trend. For the Bigs though, mastery of taking the best angle to contain and obstruct the guard, while also minimizing passing lanes to the rolling big, and learning the tendencies of various players, takes experience to master. Whether an "on-ball" or "help" big, solid rotations and recovery will greatly define the defense’s effectiveness. These are all skills that are just as likely to be aided by learned experience instead of being primarily a function of innate size or athleticism...

In summary, Big Men do take longer to develop. It’s just not in the way that people typically mean it. Blessed with the gift of size, bigs learn how to use that mass to their advantage, whereas there appears to be an offensive skill threshhold that they meet early. As they finally learn how to play defense in the NBA, more and more value is extracted from having the mammoth men on the court.

Anthony Davis is just 21 years old, just at the beginning of most of the models presented in that article. The data tells us that his defensive impact will continue to grow as he gains more experience. And as Davis continues to grow into his frame and gain experience the need for a "traditional" big man will diminish.

Centers such as Larry Sanders or Greg Monroe sound great for the Pelicans right now, but they make little sense for the team to invest eleven million dollars or more as early as next summer. When we read the report "Anthony Davis up to 245 pounds" next July would we all begin to have regrets over surrendering the best big man shooter in the game as a stopgap? I think that is a serious possibility.

Ultimately this is all about the long term play. While other writers attempt to sell you on the idea that the Pelicans are in "Win Now" mode you and I should know better. The Pelicans did not bring in a core of players under the age of (now) 26 years old because an "octogenarian owner" wants to win now. Dell Demps and Monty Williams pursued this path because they come from the Spurs and want to build a long term culture.

The Spurs have been so successful over time because they have not melted the team down at every point of failure. When you read the rantings and ravings of Jimmy Smith think to yourself the kind of article he would have wrote in 2009 after San Antonio lost in the first round, 2010 when they were swept by the Suns, or 2011 when they lost in the first round as the number one seed. Goodness, just think about the trolling article Smith would have written about Ginobili being done after last year's Finals. Or remember Smith advocating the team to select Anthony Bennett last year.

Ryan Anderson beside Anthony Davis is the best move long term. It opens up the lane for Tyreke Evans to attack the basket. It stresses every single front court in the NBA. The loyalty the team shows Anderson throughout his contract could led to another deal, the kind of thing San Antonio continues to do in order to add depth. It provides the continuity every franchise covets.

The grass is greener on the other side is an interesting proverb. The point is not as it appears, instead it is a lesson that the alternative is not always actually a better option. The grass looks greener when considering trading Ryan Anderson for a center. It might be.

But most likely it isn't.