How do you gauge progress in the Western Conference?

Share All sharing options for: Rebuilding Plans and Perspective

The Pelicans were a disappointment this season. Or at least, that is the story we have heard from the national media. Owner Tom Benson wanted to "win now" and the Pelicans sacrificed all of their assets (the 2013 and 2014 first round draft picks, Robin Lopez, Greivis Vasquez, and cap space) in order to make the playoffs this season. As discussed previously on this site, the magnitude of that disappointment depends largely on perspective. However, that perspective has, to this point, been limited to where a person felt the Pelicans should be this year. I aim to provide a different perspective today.

First, I want to put into perspective how long the Pelicans (then-Hornets) have missed the playoffs. All complaints about the quality of the images should be directed entirely at myself. New Orleans has missed the playoffs three years in a row, largely due to Chris Paul forcing his way out. Also the team was forced to adopt a rebuild after David Stern vetoed the initial trade with the Lakers for a lower floor, higher ceiling trade with the Clippers.

No one, and I mean no one, realistically expected the then-Hornets to make the playoffs the first year after Paul left. Only the most optimistic of us thought it was possible this year, two full seasons (and one draft lottery win) afterward Paul was traded, that the Pelicans were in the running for the eighth and final spot in the Western Conference. 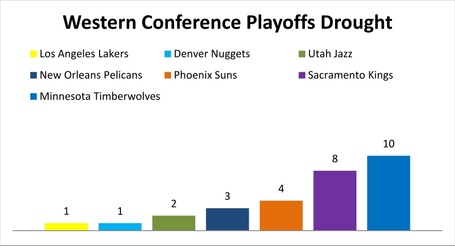 Just how difficult is it to rebuild in the Western Conference?

Incredibly difficult. Sacramento slowly crumbled over the course of three years as Vlade Divac, Chris Webber, and Chris Christie slowly aged and left the team. They have not seen the playoffs since Rick Adelman roamed the sidelines; he has coached for both the Houston Rockets and Minnesota Timberwolves since 2006. Minnesota is an even more painful story. LeBron James was the Rookie of the Year and Kevin Garnett took the Timberwolves to the Western Conference Finals to fall short against the Lakers (who eventually fell to Larry Brown's Pistons) in their most recent visit to the playoffs. That would be the Shaq-Kobe Lakers.

Four different franchise have successfully rebuilt in the Western Conference this past decade. Oklahoma City is the most often cited model; they missed the playoffs four straight years before putting everything together in 2010. In the interim they shipped off their star player (Ray Allen to Boston in 2007) and got lucky in the lottery twice (moving up in 2007 and 2009). None of those drafts resembling the 2013 draft also helped tremendously.

The Memphis Grizzlies, on the other hand, are rarely given such praise. First Shane Battier was traded to Houston for Rudy Gay and Bobby Jackson left in free agency for the New Orleans/Oklahoma City Hornets. Then there was the apparent giveaway of Pau Gasol for his brother Marc in a trade with the Lakers.  The lottery (and their own talent scouts) were equally unkind trading away Kevin Love for O.J. Mayo and topping it all off by picking Hasheem Thabeet second overall (ahead of James Harden, Tyreke Evans, Ricky Rubio, Stephen Curry, among others). Despite all these mistakes everything came together when Zach Randolph was traded to Memphis in 2009 (Year 4 below) and Tony Allen signed with the team in 2010.

The Los Angeles Clippers followed a different model. While the team drafted well by picking Eric Gordon, DeAndre Jordan, and Blake Griffin they still could not turn things around in the win-loss column. Luckily, all that asset acquisition paid off when Chris Paul demanded to go to a bigger market. Despite missing the playoffs for five consecutive seasons the arrival of a bonafide superstar turned the entire franchise around in the blink of David Stern's eye.

Stephen Curry's Golden State Warriors are the most recent rebuild success story. The Bay Area went five seasons without seeing the playoffs, the first of those most cruelly. Despite winning 48 games the Warriors failed to make the playoffs in 2008. Baron Davis left for the Los Angeles Clippers the following summer.  Al Harrington was traded that November. The following season Andris Biedrins was injured then forgot how to play basketball and Stephen Jackson was then traded in November 2009. In 2012 with Stephen Curry struggling with injuries the franchise traded Monta Ellis for Andrew Bogut and then actively tanked to retain the seventh overall pick. With better injury luck (Curry played 78 games), a trade for Jarrett Jack, signing Carl Landry in free agency, and drafting rotation players Harrison Barnes, Festus Ezeli, and Draymond Green the Warriors were bound for the playoffs.

Compared to the Pelicans

Each of the above franchises missed the playoffs at least four times. All made egregious mistakes along the way to contention. Oklahoma City traded for Cole Aldrich and Morris Peterson. Memphis made a consistent mockery of the draft, as outlined above. The Clippers signed Baron Davis to a 5 year, $65 Million deal and then traded the eventual number one pick (Kyrie Irving), unprotected, to Cleveland just to get the contract off their books. Golden State signed Andris Biedrins to a 6 year, $63 Million deal, traded Stephen Jackson for Richard Jefferson, then ultimately gave up their 2014 and 2017 first round picks (both unprotected) to Utah to get Biedrins and Jefferson off the books to pay Andre Iguodala. The next second round pick Golden State has the rights to is in 2019.

None of these teams were forced into a rebuild by a superstar craving a big market. In fact, the Clippers owe a great deal of their sudden resurgence to that fact. Below we have another graphic, demonstrating the long slog from the lottery back into respectability for each of these teams. For clarity sake I lopped off the Warriors' first season missing the playoffs (2008, they post a .585 winning percentage) and Clippers' (2007, they posted a .488 winning percentage). In both of those cases a true rebuild began the following season. 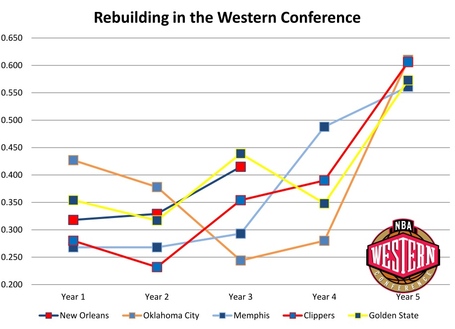 In my opinion, looking at that information, the Pelicans are ahead of schedule. Significantly so when one considers how step a toll injuries played this season.

It is also important to note that every team on that chart had a new coach in year four. Scott Brooks took over for P.J. Carlesimo 13 games into the 2008-2009 season (Year 4 on the above chart). Memphis went through three different coaches in their third year here, finally settling on Lionel Hollins for the final 39 games. His first full season was Year 4. Golden State had Keith Smart coach just one season, year 3, before bringing in Mark Jackson in year four.

The Pelicans feel like they should be much better next year. After missing Ryan Anderson for 60 games and Jrue Holiday for 48 expecting improvement seems natural. National writers like Matt Moore were expecting New Orleans to challenge for the playoffs as early as March. Before we found out just one Western Conference team will select in the top five this summer. Of course, also before Kevin Love (through his people, or agents, or other GMs, or sources) was rumored to potentially be on the trade block.

Getting back to the playoffs is not going to be an easy road. Phoenix is in year five of their rebuild (Jeff Hornecek was brought in for year four, interesting) with a bevy of assets and cap space. Dallas has proven it can reload with veterans. Memphis might be imploding before our very eyes and head coach Dave Joerger is interviewing with Minnesota. The Timberwolves are staring down the barrel of Kevin Love's impending free agency.

The biggest part of all of this is going to be injury luck. A perfect example occurred this year in Portland, where the Blazers lost just a total of 13 starter games all season.  If the Pelicans could have their preferred starting five available 97% of the time (397/410) I think it would go a long way to improving their chances. Next up is improving the defense, the weakness of which I covered earlier this week. All of the writers here at The Bird Writes will be diving into how to improve the defense one way or another in the coming months. Stay tuned.