On the Tank, the Draft and Probability

The Pelicans are in a precarious situation that sounds eerily similar to another team's problem not long ago.

Share All sharing options for: On the Tank, the Draft and Probability

[Note: this was written last Thursday. Thus, the numbers used here are updated only through then.]

Two seasons ago, the Golden State Warriors owed the Utah Jazz a pick -- if it was outside the top 7, they'd retain it. Otherwise, the pick was headed to the Jazz. Luckily, the Warriors retained that pick and got for themselves a player who helped tremendously in their 2013 playoff run. Here's a summary:

In doing so, Barnes has become a symbol for Warriors optimism and also, indirectly, a symbol for the practicality of tanking. Just as the "Thunder Model" compelled various teams to ardently pursue awfulness (see Bobcats, Charlotte), Barnes' playoff run is all the reason another franchise needs to pack it in.

It wasn't so long ago that the Warriors had a shot at another playoff run. On March 14 of 2012, Golden State was only three games under .500 with 27 left to play. Instead of making one final playoff push, the Warriors went the other way, consciously. Monta Ellis and Ekpe Udoh were traded for Andrew Bogut, who was out that season with a fractured ankle. In the short term, a deal like that could only hurt the Warriors. The upside had something to do the Utah Jazz and a protected NBA lottery pick.

It was quite the tank job really. That year, Curry played just 26 games while Bogut NEVER suited up for them (effectively trading Monta Ellis and +/- King Ekpe Udoh for nothing. Doing so allowed the Warriors to strike two (maybe three) birds with one stone.)

There have been numerous articles written about the draft (mine are here and here).

To summarize our situation, we keep our pick if it falls in the Top-5, we award it to Philadelphia if not (Holiday trade). No use discussing the merits of the trade (since it's been done so many times before) so instead let's analyze that draft pick.

These are the odds of us keeping our pick if we land at certain spots:

Those are some pretty bad odds outside the Top 4 (even the 5th worst record has just a 55% chance at getting a Top 5 pick). Currently, the race to be the worst stands like this:

We're currently slotted 11th with Detroit looming (0.5 games ahead or behind, depending on your perspective). The 5th worst spot is Boston and they're 4 games away and Los Angeles - currently slotted 4th -- is 4.5 games away with 25 games left. This means that over that 25 games span, we need to be worse than how they'll play over the same span. Even if our last 25 games are similar -- i.e. example, the Lakers finish the season 8-16 over their last 24, we'll need to lose more than 66% of our games to catch up. That means over 25 games, we'll need to win just 4 (FOUR) games for us to match LA in terms of W/L. Some might say -- well, 4-21 is a very believable tank job, considering AD just had another injury. Well, let's look at the numbers.

This late into the season, there are still 370 games left to be played. Which means, this season can still go 2^370 ways (which means a LOT). Insane right?

For this particular analysis we'll use a relatively simple but tedious variation of one of my fave statistical models called the "Monte Carlo simulation". Put simply, this is a model that tackles a specific mathematical problem by random sampling. Based on the last 370 games, I calculated a very simple win probability for each team from here on out. We divided a team's W/L% by the sum of the two teams' W/L% to get a VERY simple Win Probability for each team. The idea is that superior teams have a better chance of winning against an inferior team. Also, I added a "3%" homecourt advantage/disadvantage. To provide a sample:

This isn't necessarily true since some teams are better on the road than others, others are better at home than others and match-up issues that are yet to be considered (example: Pelicans vs Grizzlies). But for the sake of simplicity, this will do.

Now, I generated a random number (this is where the "random" sampling takes place) between 1 to 100 (decimal places included) which I used to determine which team wins or loses. In the example above, if the random number generated is greater than 38.1, then the Pels lose. If it's less than or equal to 38.1, we win!

In doing the above for the 370 games remaining and I arrived at ONE random "league standing". Tiebreakers have yet to be included in the spreadsheet (that's AWFULLY hard to do since it requires a matrix) but even if we don't consider that, my point later will still stand.

Next, I did this 10,000 times to arrive at 10,000 random league standings. From here, I counted how many times the Pels finished with a bottom 5-worst record (note: no consideration for "tiebreakers." I.e. if two teams are tied for 5th worst record, they'll both be ranked as "5" instead of "5.5". Another note: I considered inter-conference positioning. I.e. Minnesota will still be in the lottery considerations even if they get a better record than 4 playoff teams in the East).

In order to understand the next few lines after this, you have to understand how to interpret these results. The basics are: the bigger the sample size, the more accurate the random sampling will be. If say I run just 1,000 scenarios, it won't be as accurate as say running 10,000 scenarios (which also won't be as accurate as running 1M scenarios). Similarly, results of trials derived from multiple scenarios tend to hover around a certain number -- more often than not, this is the actual answer. If say I run 1 million trials of a 1 million scenario Monte Carlo Model, the answers that will come up in the 1 million trial will tend to cluster around a specific region (which means, the answer will be somewhere in that region). 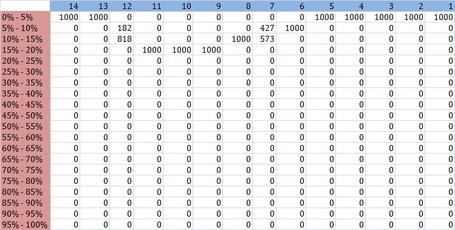 So in reality, at our current pace, we have a 10.6% chance of keeping the pick. Now you may be saying "but we WON'T be playing at the same level as our first 57 games!"

I tried doing the same thing with our W/L% (in the calculation of Win Probability) set at 25% i.e. for the remainder of the season, we'll be playing right around the level of Philadelphia. Here are the results: 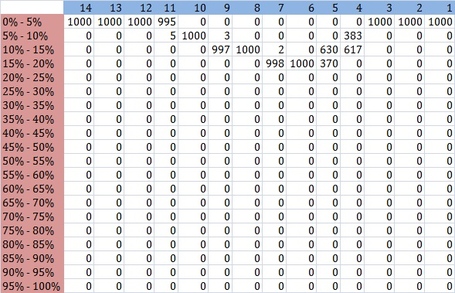 So there is some truth to what people were saying -- that if we did play worse (and everybody played at about the same rate), the odds of us keeping that pick increases (by more than 150%). But what if Anthony Davis got injured and we played at a historically bad rate? Like, 9-73 bad (i.e. W/L% of 10%) 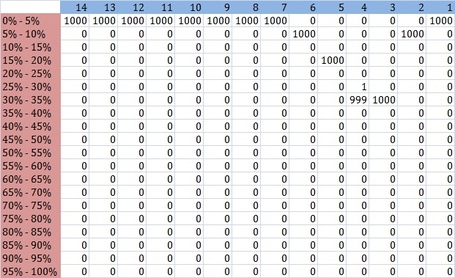 Now, I think there's a need to temper expectations here. Since going 23-34, the Pels have lost 3 more (by an average of 17 points per game, I might add). So is there a really big chance for us to keep the pick with Jrue Holiday and Ryan Anderson being out for the season? (Not to mention Jason Smith?)

In reality, we have about a 1 in 4 chance of keeping that pick. You think that's enough to cheer for the tank? You decide.

Personally, I don't think we'll ever get to 10% bad. I mean, that's historically bad. We may all hate Monty but one thing he does know is to make a bad group overachieve (and a good group, underachieve). So no, I don't think we'll be bad enough to retain our pick. So let's talk about something else, yes?