Bad news first, is a consistent method of conversation. The bad news tonight was Monty Williams. On Saturday the Pelicans defeated the Heat 105-95. Notably, fans were treated to an unconventional starting lineup of Roberts, Evans, Aminu, Babbitt, Davis. Oleh could hardly contain his glee in the recap. The coach was learning!

Hats off to Monty Williams. First, he started Babbitt and the floor balance against Miami's small ball team was evident. Second, his substitutions were spot-on. For instance, after a lackluster team performance during Greg Stiemsma's appearance, Monty gave those minutes in the 2nd half to Alexis Ajinca and he delivered 3 dunks into the final quarter. Shortly after the game had started, Michael McNamara of Bourbon Street Shots was trying to convince me Monty might still be the best option at the helm with his recent experimentation to the lineup -- he might be showing evidence of learning. I'm still not entirely convinced (as I fear Monty might revert to his traditional schemes with a fully healthy roster) but this game surely has to get the attention of even the most stringent naysayers. There may be hope left?

Tonight, against a Nets team on the second night of a back-to-back, Monty elected to start Roberts, Evans, Aminu, Davis, Stiemsma.

This is not just because the Nets are on the second night of a back-to-back. Or the fact that game went into overtime. Or that Brooklyn trots out the third oldest roster in the NBA. It is about match-ups. Paul Pierce has played in 16 NBA seasons. Anthony Davis was FIVE YEARS OLD when Pierce was drafted. AD's athleticism is wasted guarding a herky-jerky small forward around the perimeter. Coach Jason Kidd starts Deron Williams, Shaun Livingston, Joe Johnson, Paul Pierce, and Mason Plumlee. Four wings and a power forward. Williams and Livingston are both big point guards.

There might have been concerns about the damage Plumlee would create in the post, if there was any evidence of that. Sadly, the numbers say it is not the case. Plumlee has played in 56 games, logging 934 minutes. In that time he has scored 14 TOTAL points on 23 TOTAL post ups according to Synergy Sports. That is such a small sample size Synergy does not even rank him. In contrast, Plumlee has scored 74 points as the roll man in the PnR and 163 points off off-ball cuts. If you have ever watched Stiemsma play defense, lateral quickness is not his strong point.

Usually the clitche goes: two steps forward, one step back. I believe Monty Williams did the reverse tonight. One step forward, two steps back. Ready for the good news?

The Pelicans did not really earn this win. Brooklyn at the end of the game missed a number of wide open looks, both in the fourth quarter and overtime. New Orleans failed to execute much of the time in the half court. The entire first quarter was ugly. Tyreke Evans led the way with four turnovers, contributing to a total of six in the first 12 minutes. Thankfully, Anthony Davis is still on the roster and put in 9 points and 4 rebounds to keep the team in it somehow.

The second quarter was a different kind of breakdown as the defense was porous throughout. Andray Blatche poured in 8 of his 12 points in the quarter, continuously punishing the Pelicans down low. Beyond Blatche in the paint, the Nets also knocked down five threes and ten free throws. The most efficient places to score the basketball are in the paint, at the free throw line, and behind the arc. That was where the Nets attacked and they were largely successful.

Coming out of the locker rooms Monty Williams stuck with his starting lineup. More unholy trio. The sixteen point lead the Nets had at half stretched to twenty. The route was on. But mercifully, Stiemsma picked up his fourth foul just 1:50 into the third quarter. Alexis Ajinca checked in and the Pelicans went on a run. Over the next five minutes, without Stiemsma on the court, the Pelicans went on a 17-3 run. Tyreke Evans scored 8 points himself (possibly the effect of an open lane?!?) and assisted on a Brian Roberts three, accounting for eleven of the seventeen points.

Brooklyn answered back with a quick 9-3 run to again stretch the lead to double digits. Then Austin Rivers converted an And-1, and an Ajinca block led to a fast break layup for Tyreke Evans. The Nets came up empty on their next trip and Evans began to dribble down the clock for the last shot with New Orleans down seven. A hideous possession ended with a Tyreke heave from the left wing, BUT HE WAS FOULED BY ALAN ANDERSON. Oh, AND THE SHOT WENT IN!  76-73. The Pelicans ended the quarter on a 9-0 run on three possessions.

The Pelicans came into tonight with an impressive 18-11 record against the Leastern Conference. They have beaten the Heat, challenged the Pacers on opening night, swept the Bulls and Hawks, and split the series against Charlotte. Want to know what that record translates to if they were in the East? 32-20 in conference. The East is terrible. There is no way around this fact.

In the fourth quarter, Tyreke Evans, Austin Rivers, and even Brian Roberts continued to drill into the interior defense of the Nets. 8 of their first 10 points came on drives (or an amazing alley-oop from Roberts to Davis). The other two points were scored at the line thanks to Babbitt attacking the paint. In the entire final frame, the Pelicans made two jump shots. A cold stretch, with Davis on the bench, allowed the Nets to again stretch their lead to nine in just two and a half minutes. But New Orleans battled right back with the Davis alley-oop and by beating those old Nets legs off the dribble.

Back-to-back layups by Tyreke Evans gave the Pelicans their first lead since the first quarter. After both teams went back and forth, Anthony Morrow finally found the range, knocking down a deep three. Joe Johnson attempted to answer with a three of his own but missed. Evans corralled the rebound but was entangled with Shaun Livingston and appeared to twist his ankle on his way to the ground. No matter, Evans stepped to the free throw line a drilled both to extend the lead to five with just 1:14 remaining.

A Plumlee put back and a Paul Pierce three tied the game, while the Pelicans' lone possession resulted in a mid range jump shot for Aminu. Um, yeah. There was still time left on the clock though, and with 24.1 seconds to go, Monty called timeout to win the game in regulation. The final possession was less than ideal. Anthony Davis seemed to be directing Anthony Morrow one direction, Tyreke Evans looked confused, Brooklyn sent a late double team, and all New Orleans could muster was a half-hearted chuck by Morrow. AMmo could have possibly passed to Rivers set up in the corner. Time and situation (along with the play, whatever it was designed to be) made two passes a tough bet. To overtime the Pelicans went, with a 4-0 record on the season. Those rooting for the tank probably point to those four victories as some kind of failure.

Anthony Morrow is a shooter. He gets paid millions of dollars to shoot the basketball into the basket from 23 feet or further away. That is what he does. So what if he was 2-9 in the last three games from deep or that he was 1-3 going into overtime. He is a shooter. The worst kind of shooters are the ones who over think the process and lose confidence. Anthony Morrow is not that kind of shooter.

Two Anthony Davis free throws were answered by a Pierce turnaround. The next two possessions were missed Morrow three point attempts. Now, he was up to 1-5 from deep on the game, 3-14 if you include the last three games. Brian Roberts hit a pretty three off an Anthony Davis screen to put the Pelicans up three. Next possession Tyreke Evans pushes the ball up the floor and kicks to a wide open Morrow on the left wing. OF COURSE THAT MAN TAKES THAT SHOT AND DRAINS IT! HE WAS DUE!

The Nets took a timeout and got a Shaun Livingston layup to bring the score to 106-102 Pelicans. An Anthony Davis jumper was a touch long and Brooklyn had a chance to cut it to a one possession game. Off a drive, Mason Plumlee decided to test fate, physics, and the one superstar that was on the court. With no fear, he attempted to go over and/or through Anthony Davis from the right block.

The Unibrow didn't block the shot.  He didn't pin it to the glass.  He jumped up and caught the ball with both hands, bringing it and Plumlee back to earth. Then he won the ensuing jump ball. After a missed Roberts three and Joe Johnson dribbling the ball off his leg out of bounds, Tyreke Evans and the New Orleans Pelicans had a chance to put the game on ice. Evans drove left and kicked to Anthony Morrow. Nothing but net and mean-mugging down the court. The clock hardly ran out at this point, but numerous Brooklyn threes clanked off the iron as those tired legs simply could not win two back-to-back overtime games.

19-11 against the Eastern Conference. Only the Pacers, Heat, and Bulls have a better record within the East.

- Tyreke Evans finished the night with 33 points, 10 rebounds, 7 assists, 3 steals, and 7 turnovers. As I mentioned above, those 4 turnovers in the first half were rough (he also was called for a technical when leaving the court arguing the cleanliness of some of those turnovers no doubt). He scored 22 of those points after halftime, all of which came after Stiemsma was relegated to the bench. He scored just 5 points all night with Stiemsma on the court. This information is not a coincidence. 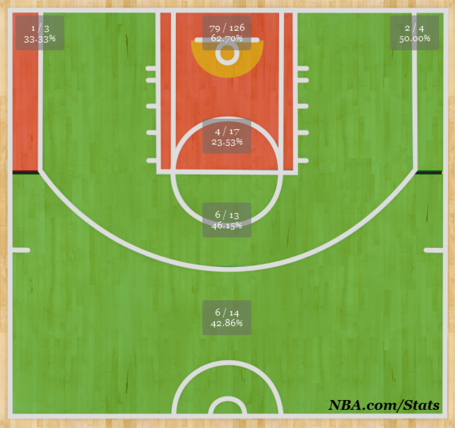 - Anthony Davis had his streak of 28 points in 8 games come to an end tonight. He only had 24 points, 14 rebounds, and 3 blocks. He was in foul trouble in the first half, but thanks to the personals and rotations, he found himself playing center for the entire fourth quarter and overtime. In that span of 14:21, the Pelicans outscored the Nets by 13 points.

- Austin Rivers is getting to the rim and finishing at an amazing rate for a second year guard. His FTs still need to improve, but he has come a long way this season. He is shooting 43.9% from the field since the All-Star Break.

- Brian Roberts was incredibly efficient tonight, much of that due to his 3-5 performance from behind the arc. He appeared to hyper-extend his knee in the fourth quarter but was able to play much of the fourth and the extra period. He is going to be sore tomorrow.

- Anthony Morrow is going to keep shooting. He is either hot or he is due. Period.

The Pelicans have Tuesday off. Chris Paul and the Los Angeles Clippers will visit on Wednesday, the Pelicans' fifth consecutive game against a playoff team. Can they make it four victories in a row?