Or, what if the Pelicans owned a time machine!

The best part about writing about sports is inventing concepts that have no basis in reality. The best known of these is grading out actions after the fact and then hopping "into a time machine" to make better decisions than those a particular organization embarked on. There are two key points in time for me as a Pelican fan I question.

First, is the 10th pick in the 2012 NBA Draft. If you're new around here, I was really high on Jared Sullinger coming out of college. Yes, there was a point I was actually advocating Sullinger over Davis, of which I am not particularly proud of! To be fair, that was also in January.  By around the draft I was beating the Davis and Sullinger drum as loudly as I could while we all resigned to Austin Rivers ultimately being the pick. Sullinger's back issues slid him down to the 21st pick and he ultimately required surgery to repair the damage, playing only 45 of 82 games for Boston in 2012-2013. This season, however, he has played 49 of 51 games for the Celtics. His Basketball-Reference page can be found here. Austin Rivers has improved this season, but "Sully" has been by far the superior NBA contributor to this point.

As to the 2nd point, it would obviously be matching the Phoenix maximum offer to Eric Gordon. The problem with changing that scenario is how it effects so many other dominoes. What do the then-Hornets do with cap space nearly two years ago, and how does that effect their draft position, the Jrue Holiday trade (which most of us around here love), etc. Just too many variables, so we need to skip it and look elsewhere.

Hmm, how about the Tyreke Evans sign-and-trade then? I have been a defender of that move most of the season, as I discussed in Breaking Bad - When The Injury Bug Strikes.  But, for our purposes, I am going to deviate from my personal feelings on Tyreke in NOLA (good long term unless Ryan Anderson is going to miss 50% of games over his contract) and discuss what could have been done instead. Who could the Pelicans have brought in, who would they have to move, etc.

Instead of selecting Austin Rivers the then-Hornets selected Jared Sullinger. However, due to his back injury he still has surgery and his presence on the roster does not functionally change how the then-Hornets finish in the lottery. The Pelicans have traded draft rights to Nerlens Noel and their 2014 First Round Pick to Philadelphia for Jrue Holiday and the draft rights to Pierre Jackson. Then the Pelicans waive Lance Thomas and Terrel Harris (I bet you completely forgot Harris!)

How about a Davis, Anderson, Lopez, Sullinger, Smith big man rotation over Stiemsma being on this roster? I believe that's all the votes in favor. Continuing on, we at The Bird Writes (then At the Hive) went about projecting who the Pelicans should bring in after the Jrue Holiday trade here and here. A lot of the same names came up. Andre Iguodala (too expensive, was an unrestricted FA), Dorell Wright (has literally disappeared on the Blazers bench, look at the stats), Chris Copeland (112 total minutes in Indiana so far this season), Chase Budinger (battling injuries, only logged 254 minutes this season) and Martell Webster.

Thanks to our handy time machine I think it is best to focus our energies on Webster. His stats have not been great, but he's still shooting well this season. A quick look at his shot chart shows a player who could be incredibly invaluable to the Pelicans. I want to point out that on the season the Pelicans entire roster has made 60 corner threes in 49 games. Martell Webster, averaging 30 minutes a game over 47 games, has made 43. BY HIMSELF! 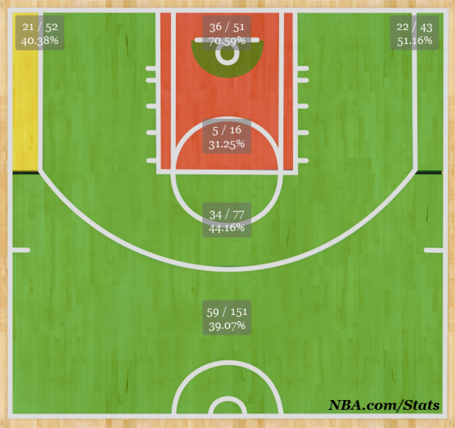 I think it is fair to say that Martell Webster would have been a significant upgrade at SF and for the general functionality of this roster. But what about cost? Webster re-signed with Washington for 4 years (4th year partially guaranteed) for a total of just under $22 million this summer. Given the Pelicans current hypothetical cap situation, they could have afforded to offer Webster more money up front, up to $6.6 Million in the first year. Let's use a starting salary of $6.5 Million decreasing over time with the fourth year also similarly guaranteed to Washington's offer. The Pelican offer is $24.5 Million over 4 years. (Note that Kyle Korver signed a similar deal with Atlanta.  Oh now I feel really terrible...)  Ideally the increase in guaranteed money and the increase in total contract value could have brought Webster to New Orleans.

Secondly, the Pelicans signed Anthony Morrow to a veteran's minimum deal this summer. This action would not have affected the Pelicans reaching the salary cap and even in our time machine, is one I would do again if I were Dell Demps. Let's take a look at the situation now.

This is what he was discussing: the other hypothetical choices that the Pelicans turned down to pursue Austin Rivers and Tyreke Evans. A rotation that could have looked like this, and that is before the Room Exception is used (it is what the Pelicans utilized to bring in Greg Stiemsma).

There remain issues with this rotation. Who is a decent wing defender on that roster? With all that shooting on the second unit, who is going to take care of the defending or rebounding? What could the Pelicans have realistically brought in with the room exception? DeMarre Carroll, Alan Anderson, Pablo Prigioni and Marco Belinelli are all contracts signed this season in the range of the room exception. However, even with all those questions for a second unit, I think it is pretty solid. Not as solid as the expected Ryan Anderson-Tyreke Evans pairing, but trade-offs are a given.

Robin Lopez sticking around would not have been as good as he has been in Portland without the Pelicans dramatically changing their defensive philosophy. Greivis Vasquez is an elite point guard coming off the bench. The combination of Lopez and Sullinger would help keep Jason Smith in a role he could flourish in, hopefully to the tune of better health.

I'm just going to hop out of this Time Machine before I get violently ill, but it has at least been an enlightening trip.