[This piece deserves to be bumped to the front page! - Oleh]

Anthony Davis has been dominating the NBA. Whether it's going where no 21 year old has ever gone before or stacking up against historical greats, Davis has put the whole league on notice. Everyone is aware of his shot blocking prowess, but there is an interesting phenomena emerging that isn't getting enough attention. Anthony Davis has been absolutely devastating as a free safety.

When New Orleans first acquired Omer Asik from the Rockets one of my first thoughts was, "Imagine AD being able to patrol the paint without worrying about his back now that he has help." I had a romanticized vision of Davis swooping in and out of passing lanes and causing general mayhem, but I was unsure if it would actually be implemented successfully.

We all knew this was the ideal pairing and utilization of the two bigs. Asik would hold down the fort under the rim and Davis would be free to do AD stuff. Life's a box of chocolates with Monty Williams and the Pelicans, and I wasn't sure what our defensive scheme would look like. Luckily, in just 10 games it is clear that Davis is being used just as I imagined.

Last year Davis led the league in the number of jump shots blocked atleast 10 feet away from the rim with 36. This year he is already up to 11 in just 10 games. That is only the beginning of his destruction. Let's take a look at his defensive shot chart. Here are all the shots that AD has defended outside of the restricted area thanks to NBAsavant.com. 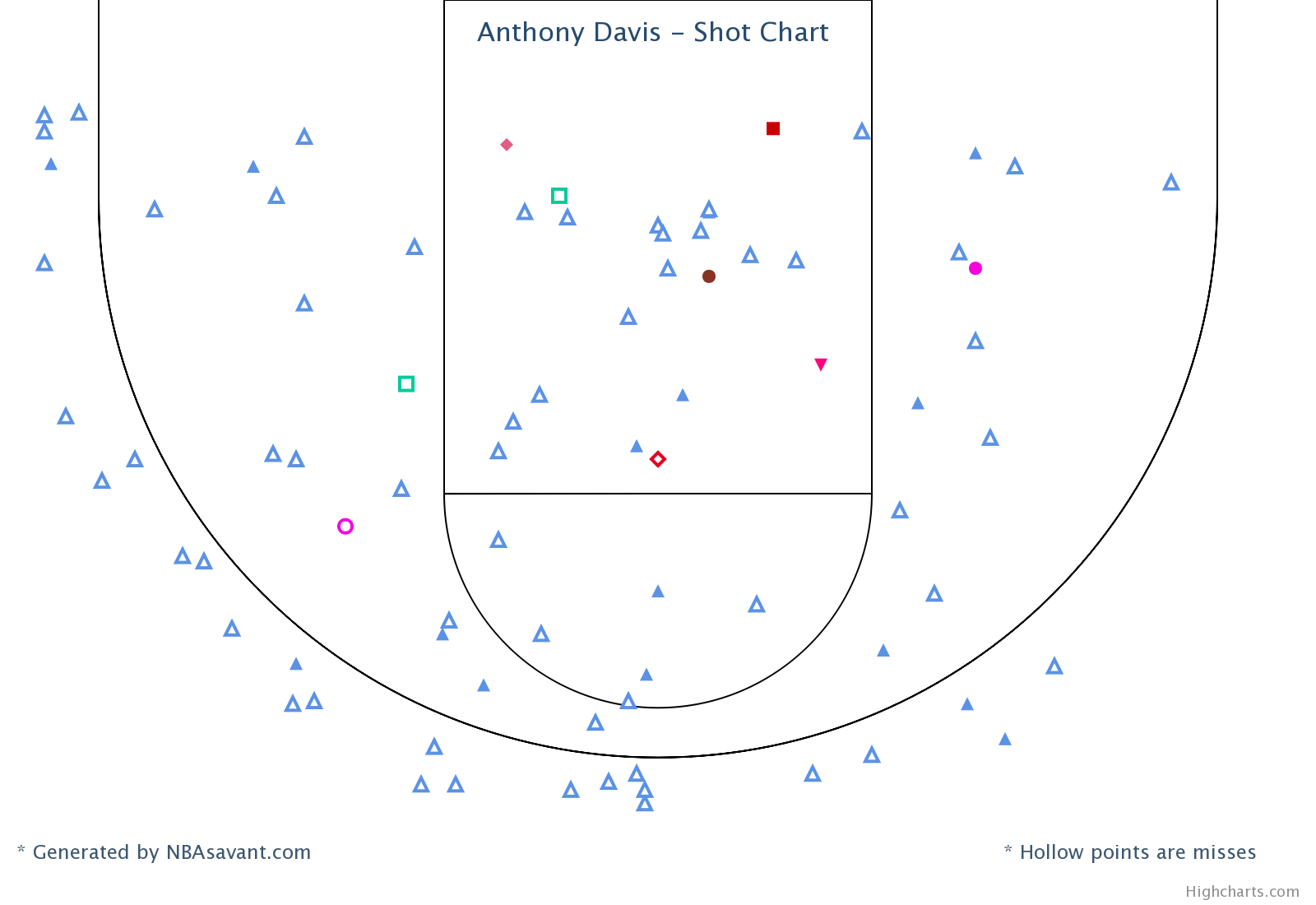 See all those hollow points? Those are missed shots. He's held opponents to just 21/85 (24.71%) shooting outside the restricted area. The whole court is a graveyard when AD is lurking. When you adjust the filter to only shots outside the paint AD is allowing just 14/62 (22.58%) shooting against all opponents. Both these numbers top all big men in the NBA who have contested at least 40 shots and are well under the NBA averages of 37.73% and 37.71% allowed from those areas respectively. Simply put, Davis is everywhere. The 85 shots he's contested outside the RA is also the most on the Pelicans thus far, one less than both Eric Gordon and Austin Rivers combined.

A perfect example of the ridiculousness that is Anthony Davis is this clip where he somehow managed to block two fadeaway jumpers in a span of 2 seconds.

While everyone was losing their minds over how Davis blocked a LaMarcus Aldridge fadeaway and then blocked Wes Matthews as well, his impeccable defense in the sequence preceding that is almost equally as impressive. Let's hit up the film and show you how Davis's tendrils were all over that play.

Davis begins with a textbook hedge to disrupt the Lillard - Aldridge pick and roll.

Notice how Davis pushes Lillard out almost to halfcourt. There Lillard is forced to reevaluate his options as Holiday smartly dropped back to help contain Aldridge. Next, Davis finds his man and recovers back to position.
Even on his way back, Davis is wary of Lillard pulling up for a three as he is very capable of doing and is in the right place to contest if need be. Once Davis gets back to his man, the ball has moved to Crabbe on the wing. Davis sees this movement and immediately slides in to the lane to prevent dribble penetration.

Crabbe sees the lurking Davis passes the ball quickly to Aldridge in what I can only assume is fear. Davis once again gets back in position to his man and pushes him out of desired high post position.

Holiday smartly traps for a second, forcing LMA to kick the ball back out to Lillard for the reset. By this time, the shotclock has wound low and Lillard feeds it back to Aldridge for the ISO. Unfortunately for Aldridge, Davis reads the play perfectly, and well, the rest is history.

AD's mark was all over that play and countless others. It's the small things like this that get unnoticed when compared to the highlight real blocks or other-worldly dunks. However these are the things that help win games.

Davis is really coming into himself as a disruptor. He still has a ways to go before truly mastering the nuances of an NBA defense, and of course, having the third best rim protector in the league watching your back certainly helps. At the end of the day, no place is safe with Anthony Davis on the court.