Great Expectations: The Pelicans Will Make the Playoffs

The talent level on this team is high, and barring another ridiculous amount of injury, their on-the-court performances will lead to many more wins than losses.

Share All sharing options for: Great Expectations: The Pelicans Will Make the Playoffs

First things first, it's good to be back for another season. The promise of a new roster this time last year succumbed to a bevy of misfortune, so the Pelicans coming out party was decidedly put on hold. Fast forward to today and it sounds like Ryan Anderson and Jrue Holiday are coming along nicely in their progress from major injury. Tyreke Evans hamstring doesn't sound too severe. Eric Gordon, for the first time in ages, is not limited in any way. Austin Rivers is raring to go in his third season, 12 pounds heavier and reportedly a mid-range game to boot. The Pelicans won't have to trot out a mismatched unit masquerading as starting centers. Thank you, Omer Asik. Oh and yeah, we've got some guy named Anthony Davis. Supposedly, he's already in the highest echelon of the NBA at the ripe old age of 21.

Remember when your Pelicans won 9 of 12 games in March and capped it off with an incredible week of wins against the Heat, Nets and Clippers? Despite the 179,450 or so missed games by prominent rotation players, last year's team still proved to be a very effective bunch. 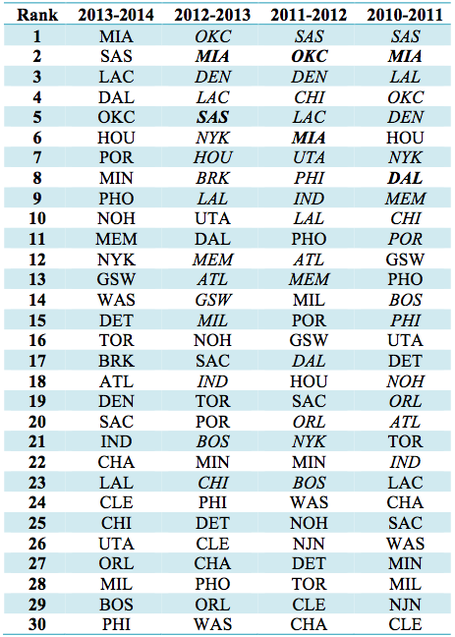 Teams in italics from prior years made the playoffs. (At the time this article was written, approximately a week of the regular season remained in 2013-14.) Bolded teams were in the NBA Finals, and as you can see, this model correctly predicted last season's final battle.

Scrolling down a bit further, one sees Minnesota, Phoenix and New Orleans occupying spots 8 through 10. In the previous 3 years, only once did a non-playoff team make the top 10 team -- 2012-13 Utah Jazz. (Another negative Tyrone Corbin shout-out?) The 2010-11 Houston Rockets should have been italicized as they were a 5th seed in the playoffs.

Minnesota was a statistical anomaly as their record should have been exceptionally better. They were 6-13 in games decided by 4 points or less. Not surprisingly, their average 4th quarter scoring margin of -2.3 was second to last in the association. That's epic failure. They were only 1 of 6 teams to have been outscored by an average of 2.0 or more in the final quarter in the last five seasons.

Conversely, Phoenix had a wonderful season -- they won 48 games. Unfortunately, due to the broken playoff system that rewarded a number of mediocre to bad teams in the Eastern Conference, the Suns became just the second team in the last 40 years to miss the playoffs with that win total. Ouch! Don't be surprised, that if the NBA ever changes their playoff format, it will have originated from somewhere in Arizona.

Last but not least, the Pelicans posted a solid WPER but missed the playoffs by a mile. Why? The main culprit was an abysmal defense. As to where MIN and PHX rated in the middle tier of defensive rating, the Pelicans hovered in the cellar. As you'll notice from the chart above, the Indiana Pacers have rated unusually low the last two seasons, despite their success on the court. As most know, PER does a terrible job of accounting for many defensive aspects, so it should shock no one the Pelicans ranked high on a list where fundamental team defense isn't taken into consideration. However, that's all about to change.

Monty has his Golden Center

At one time or another, David, Rohan and myself have alluded to the importance a mobile defensive center can make on a Monty Williams led team. When Emeka Okafor was on the roster, the team finished 10th and 16th in defensive rating. Without him, 28th and 25th. As to where most coaches keep their centers tethered to the paint, Williams has shown no qualms about the man in the middle hedging hard on a ball handler 25 feet from the rim. Or, having him switch on a PnR far from the hoop. And the majority of the time, all of this was done with what many consider to be below average centers.

For a fantastic comparison of how much the Pelicans have floundered vs. what we can expect out of Asik, I implore you to go re-read David's piece from August. Below is a very pertinent part:

Let's take a quick look at the overall numbers for the Pelicans defensively last year.

Thus far I have compared Omer Asik's total impact over two seasons to what the Pelicans have done. Now let's narrow that focus to Asik's contributions in 2012-2013 to the Pelicans in 2013-2014. This pinpoints Asik's off court time to periods he was replaced by replacement level players; similar to the ones he is replacing in New Orleans.

The similarities between Houston when Asik was off the court and New Orleans last year are striking. Houston struggled defending shots, fouled at an obscene rate, and could not collect defensive rebounds. That 108.1 defensive rating is elevated considerably thanks to the Rockets giving up 127.0 points per 100 possessions when Asik went to the bench against Oklahoma City in the playoffs.

Examining the Pelicans and the Rockets without Asik side-by-side really illustrates the similarities.

Some may deem it appropriate to bring up the success of Robin Lopez away from New Orleans. Perfect! It will help illustrate our example as to why Monty's centers must be able to handle a large volume of responsibility. Foot speed and solid reaction time are a must. David's article made mention of the contributions by Lopez, and although he was better on the court than off, he didn't fully distinguish himself. After all, the team's defensive rating with him in 2012-13 was 107.6 while last year's ragtag bunch contributed to a 107.3 rating.

In Portland, Lopez aided the Blazers to the 16th best DRtg of 104.7. That's significant, considering just a year earlier they checked in at 106.9, 5th worst in the association. The only major change to the rotation was he replaced J.J. Hickson in the starting lineup. According to the Player Tracking Data, Robin Lopez was fantastic around the rim allowing opponents a measly 42.8%, 4th best in the league (among players whose opponents attempted 5 shots or better in that range). Digging deeper, one sees the true value Lopez brought to the Blazers -- opponents attempted 10.2 shots at the rim against him, 3rd highest rate in the league. Slow-footed Robin Lopez was likely mandated to stay near the rim and help cover for teammate mistakes; thereby, his limited value was put in the best position to succeed.

With Asik, such limitations will not be necessary; and thus, Monty will be ridiculed far less for his complicated schemes. A year ago, Drew Garrison broke down our new center's defensive versatility in clear detail:

The primary role of any big man is to defend the paint, but Asik doesn't just "protect" the paint. He rotates around the key like a junkyard dog protecting property.

It's not just Asik's ability to be the man in the middle, though. He can defend from the rim to the three-point line and is fantastic at rotating after helping on defense.

Asik mattered last year, and even if he plays behind or with Howard this year, he will matter again. There's a reason the Rockets were seven points better per 100 possessions with him in the game than on the sidelines, according to NBA.com, and it's not because he's putting numbers on the board.

Seriously, go have a look right now at all the gif's and video footage in the aforementioned article. It will make your mouth water. Everything Monty demands from a center, Asik can handle better than anyone else in the league.

Oh, and there's one more thing. Well actually a rather big thing -- Omer Asik is simply one of the best rebounders in the game. In the last two years combined, both of his seasons placed in the top 10 in total rebound percentage. And his best rate came in 2012-13, when he was the starting center for the Rockets. Going against the best in the league didn't deter his numbers, but rather, seemed to inspire them.

Perhaps the greatest thing about the acquisition of Asik will be the seamless transition. When notably players change teams, it usually takes awhile, and sometimes never, for all the alpha dogs to find a way to coexist. That will never be an issue with Asik. He doesn't require any bright lights and fully understands he'll never be mistaken for an offensive threat.

In Spain, Omer Asik told Monty/Anthony Davis he just wants to rebound/defend. Upon hearing that, Davis' smile was "like the Kool-Aid Man"

The Variability on the Amount of Wins

The exact number of games the Pelicans will be able to put in the win column will be dependent on various other improvements, many of which I touched on in last year's review of Monty Williams. Among them: balanced lineups, smarter rotations, better ball movement, improved shot selection and more harmonious defensive concepts.

However, one thing is for certain, the Pelicans enter the upcoming season with their floor raised significantly. 2013-14 saw key players miss thousands of minutes but the Pelicans still managed to place in the top 10 in team WPER. As observed in the chart, this bodes extremely well when calculating playoff chances. In addition, two glaring deficiencies -- the 25th ranked defense and 21st ranked rebound rate -- will get an Asik-sized booster shot in the arm.

Currently, it seems many are predicting the Pelicans will end up on the cusp of the playoffs, yet just narrowly miss out. From outsiders, that's probably a fair assessment, but in my opinion, not the correct one. All teams require their key contributors remain injury-free as best they can. Last season, New Orleans had something akin to an atomic bomb going off inside the Smoothie King Center. In all fairness, nothing remotely similar should happen again.

When factoring for a typical amount of injuries, the natural progression of one of the youngest rosters in the league and plugging two major areas of need with Omer Asik, ESPN's Summer Forecast of 10th place and 39 wins makes little sense. After all, Jeff Stotts' model believed last year's roster would have won an additional 5 games had injuries not been a factor.

And hey, how about this most relevant statistic? An Omer Asik team has yet to miss the playoffs!