Before the start of the regular season, five specific areas will be discussed in depth that I believe will be key in getting the Pelicans to the postseason. They will be as follows:

Last season, I repeatedly harped on the lack of secondary assists. For those who need a refresher, this is defined as "quantity of passes made by a player to the player who earned an assist on a made shot. Assister must make a pass within 2 seconds and 1 dribble for initial passer to earn a secondary assist." The Pelicans finished dead last in the NBA with 3.6 secondary assists per game. From an article excerpt:

EVERY team in the association has at least one player on their roster averaging 1.0 or greater secondary assists a game but one, your Pelicans. Zero, zip, zilch! The closest player? Jrue Holiday sitting at .7, an absolutely dismal mark for a starting point guard. Further, the top teams in the league (OKC, MIA, SAS) have at least 2 players and many others come close.

Unsurprisingly, New Orleans was 5th worst in Front Court Touches per game at 274.8. By itself, this number isn't detrimental; however, when you factor the Time of Possession (the total number of times the team possesses the ball per game in minutes), it became frightful.
Out of the bottom 1/3 of teams in Front Court Touches, only 3 made the playoffs. Yet, despite the minimal ball movement, they all were in the top half of time of possession. Essentially, no team had the ball stick longer in each player's hands than the Pelicans.
According to previous statistical models, that's bad.

Back before player tracking was a thing, 82games undertook a number of projects and this one involved touches. The data above undeniably states that the faster the ball moves, both points per possession and efficiency will increase. And it doesn't come at a cost to the turnovers department.
In another one of their studies, they focused on dribbling. When the ball sticks, say when Brian Roberts or Tyreke Evans pounded the ball repeatedly into the floor on a single possession, efficiency withers and dies.

The numbers though show that the worst efficiency comes with the most dribbles, so over-dribbling can be a real problem: on 6+ dribbles the league as a whole shoots a woeful .398 FG% and averages a meek 81.5 points per 100 possessions.

The Kings and Pelicans each ranked in the top five in player movement, but in the bottom five in ball movement. New Orleans ranked third in the league in drives, but was the team most likely to shoot on those drives.

On average, about 65 percent of drives would result in a drawn foul or a shot by the driver. Tyreke Evans(70 percent), Eric Gordon (79 percent) and Austin Rivers (82 percent) were all guys who drove a lot, but not for the purpose of finding an open teammate.

I couldn't have said it better myself: "but not for the purpose of finding an open teammate." They severely capped their potential and didn't force opposing defenses to worry about a vast array of other possibilities. 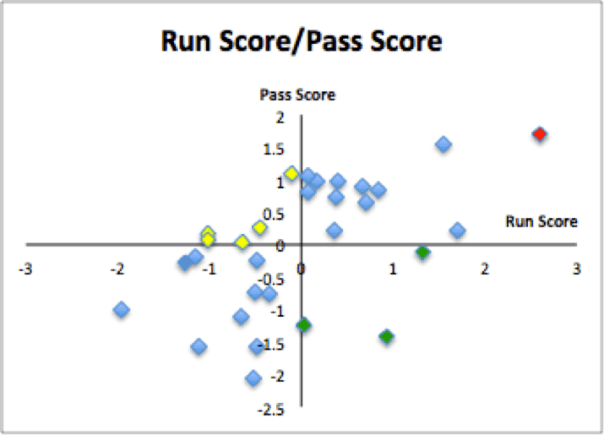 As you can see, run and pass scores are seemingly correlated (p-value of .002) – teams that pass well usually run well, with a few exceptions...
The final green dot, all the way out by itself, is New Orleans. The Hornets have been an enigma this season, ranking top five in running but bottom five in passing.

Asides the incorrect use of our former nickname, the linked article absolutely nailed our team's woeful passing ratio. When the franchise traded for Tyreke Evans, many experts feared the guard heavy roster. In hindsight, it appears they were partially right as quite a few Pelicans failed to adjust to passing the ball a lot more than they've ever been accustomed to doing.

It's Not a Lost Cause

Now, before anyone rekindles any hatred towards Dell Demps, realize that the team isn't loaded with incapable passers. In fact, the Pelicans possess a great passing trio, in terms of efficiency.

Nylon Calculus looked at passing efficiency by examining the number of all assists (assists, secondary assists, free throw assists) per pass. Evans ranked 9th, Gordon 15th and towards the end of the article, we learn Holiday came in at 28th.
However, if we were to look at passing efficiency through points (points created by assist per game divided by passes per game), the trio ranked better.
When Evans, Gordon or Holiday moved the ball, it directly led to very good offensive output. Now imagine if any one of them were in possession of the ball after a successive pass or two, before the defense has recovered 100%. I'd be willing to bet their skills would have been well suited to take advantage of a slightly larger passing lane or a more apparent seam in the defense.

As most know, the Heat took some time to acclimate themselves with one another before embarking on several championship runs. While it would be nice to view the improvement through player tracking data, one can assume it occurred. In the Big 3's first season, Miami was 26th in assists. The following season, they improved to 21st. Then they jumped to 7th and, last season, they finished 11th.
Hopefully, this upcoming season, the Pelicans learn how to better mesh their individual skills for the sake of team improvement. Our roster possesses a world of talent, one that makes other teams considerably jealous when remembering the age of our core. However, it will only remain as untapped potential if they fail to turn it into performance.