Share All sharing options for: Graphing the 2012-13 Hornets: Offensive Efficiency

About a month or so ago, I posted a graph that looked at how much of a contribution individual Hornets made, looking at their playing time and their efficiency differential.

In this edition, we'll take a look at how individual Hornets performed solely on the offensive side of the ball. First, let's take a look at the graph (you might need to click on it to see it in greater detail): 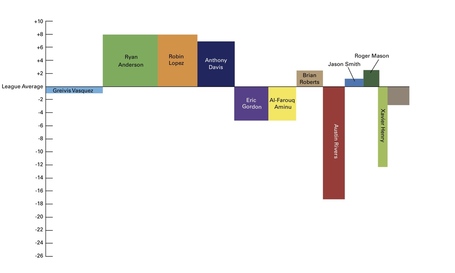 The y-axis represents a player's offensive efficiency relative to league average - going above league average is good, naturally. The x-axis is the number of possessions used (calculated by multiplying usage rate by minutes played - I know that's a bit rough, but it's a hand-made graph, folks), so players that have really wide blocks used a lot of possessions over the course of the year and players that have narrow blocks were low-usage players or didn't play much, or some combination of the two.

The first thing that jumps out is the huge block of positive impact that Anderson, Lopez, and Davis provided. Anderson used more possessions than Davis and Lopez, but they all had about the same efficiency differential of +7 or +8, a very respectable performance for three of the team's top 4 most-used players.

Greivis Vasquez was another story entirely. Offensive Rating isn't the best metric for looking at point guards due to the issues of calculating the value of an assist, but it's pretty clear that Vasquez used a ton of possessions and provided roughly league-average production. On a team with a backcourt that featured little talent and even less depth, Vasqeuz's ability to eat possessions at a roughly league-average rate was a godsend.

You can see that two of the players that used a lot of possessions in the backcourt, Eric Gordon and Austin Rivers, had pretty rough years. Gordon didn't play that many minutes, but he used 30% of the team's possessions while he was out on the court. Rivers, as we've said many times over the course of the past year, was truly dreadful.

Brian Roberts, however, was a very nice bright spot at the guard position last year. He had to really shoulder the load at times when Rivers and Gordon were injured, and he rose to the occasion on offense. I think if he returns to a more reduced role this year, you'll see him perform even better on offense while hopefully not being exposed as badly on defense. Roberts was an incredibly useful player last year, and you have to credit Demps for plucking him out of Europe.

Al-Farouq Aminu and Xavier Henry are, unsurprisingly, offensive liabilities. Aminu, for all his defensive qualities, has serious issues in half-court offense. It's astonishing that his offensive rating is so low considering how well he performed in transition - he was one of the best players in transition in the NBA through the first month or two of the season. However, his half-court skills really drag down his total.

Jason Smith and Roger Mason were helpful bench contributors, even though they didn't see too many possessions for various reasons. The huge taupe block to the right of Henry is all other Hornets combined, from Lou Amundson to Terrell Harris.

Anybody stick out to you? Do you have hope that Rivers and Gordon can improve on their woeful performances last season now that Evans and Holiday will be shouldering more of the offensive load? Let's talk about it in the comments.