This summer, the Pelicans created an impressive ensemble of high tier talent. Jrue Holiday, fresh off an all-star season in Philadelphia, and Tyreke Evans will join Anthony Davis, Ryan Anderson, and a hopefully healthy Eric Gordon to form an impressive top-5.

An NBA game requires for 240 (slightly over, because of overtime games) minutes to be allocated between five positions. Holiday, Evans, Davis, Anderson, and Gordon are each expected to play around, or slightly over, thirty minutes per game. Assuming Holiday plays 35 minutes a game and the other four average out to thirty, the top five will account for 155 minutes per game.

Unfortunately for the Pelicans, this leaves around 85 minutes a game unoccupied. Luckily, management seems to have realized this, and happens to have players on the roster beyond the core.

I would guess, though I do not have the statistical research to support this claim, I would guess that the production of the top-5 players on a roster explains a very high percentage in the variance of the point margin or overall wins of a team.

However, for the Pelicans, every bit of variance matters. A few points per game can affect the final result of that game, which, in the heated competition for the West’s final two playoff spots, can be the difference between a franchise enlightening playoff appearance and a trip to the lottery without a draft pick.

One impactful non-top five role will likely be split between the Pelicans’ trifecta of seven footers, Jason Smith, Greg Stiemsma, and Jeff Withey. Though Anthony Davis can effectively anchor a defense, the Pelicans likely wish to avoid exposing him to the wear and tear of an entire season matched up against opposing centers. With Davis only occupying the center position periodically, Smith, Stiemsma, or Withey will have to protect the paint and at least function offensively both alongside and without Davis.

Two seasons ago, as a 26 year old rookie with the Boston Celtics, Stiemsma emerged as an effective defensive presence off the bench. Though not quick laterally, Stiemsma is capable of making timely rotations. He has a tendency to stick close to the roll man on a pick and roll, not always preventing penetration from the ball-handler. 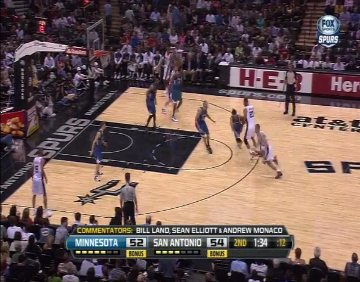 As Tim Duncan sets a screen, Stiemsma does not immediately recognize the need to deny Tony Parker easy access to the paint. Parker already has his momentum built coming off the screen, yet Stiemsma, after waiting next to Duncan a few beats to long, is not in position to easily cut off Parker.

This habit is not necessarily always detrimental. When the help defense, Stiemsma himself, or an offensive decision forces the ball handler to pass to the roll man, Stiemsma is a very effective defender, allowing only 0.71 points per play, 22nd in the league.

Offensively, Stiemsma rarely ventures beyond his basic screen and roll and dump off responsibilities. Jason Smith, conversely, has a more explosive, in the physical sense, offensive game. Though he won’t draw any Andre Drummon comparisons, Smith runs in transition and finishes out of the pick and roll more effectively than Stiemsma, scoring 1.24 points per play in transition and 1.05, 46th in the league, in the pick and roll. While Smith is not as consistent with rotations and positioning as Stiemsma, he can be a capable defensive presence on occasion.

The other major non-core role, be it as a starter or off the bench, will be played by Al-Farouq Aminu, arguably one of the more underrated players in the league. Though inherently damaging to any offense’s spacing, Aminu is an excellent rebounder and very good defender. Playing Aminu alongside a frontcourt of Anthony Davis and Ryan Anderson may help maintain confidence in the rebounding and defensive abilities of that pairing, while switching a traditional center for Ryan Anderson (and sliding Davis to center) helps alleviate the spacing woes caused by Aminu. As has been mentioned before this off-season, Aminu had the highest RAPM on the Pelicans last season. Reflective of his perceived contributions, Aminu was a far below average -1.9 on offense, but a near elite +3.6 on defense. Though he will never be a star, Aminu may play a key role in pushing the Pelicans to the playoffs.

Aminu, the center group, and the various collection of fringe talent rounding out the Pelicans roster may not receive the attention of the more talented players, but, given the synergistic nature of NBA basketball, they may have a profound effect on whether 2013-14 is perceived as a success.