Share All sharing options for: Graphing the 2012-13 Hornets: Efficiency Differential

What better way to celebrate finally becoming a Pelicans blog than by talking about when they were the Hornets? I've created a handful of graphs that I'll publish over the next couple of days. The goal is to show how big of a contribution each player made to the Hornets last season and how positive or negative that contribution was.

Today's chart is of efficiency differential and minutes played. On the vertical axis, you have efficiency differential - that's Offensive Rating minus Defensive Rating, taken from Basketball Reference. On the horizontal axis, you have the percentage of team minutes played throughout the season. The players are in order of decreasing minutes played, from left to right. So the size of each player's box indicates roughly the size of their contribution to the team. If that box extends above the league average line, that contribution is positive, and if the box extends below the line, it's negative. 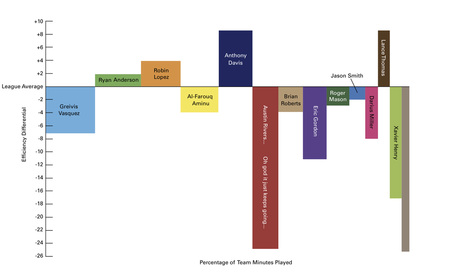 You'll probably need to click on the chart to actually be able to read anything, I suppose. Distressingly, only four players had a positive efficiency differential last season - Ryan Anderson, Robin Lopez, Anthony Davis, and Lance Thomas. Austin Rivers was, unsurprisingly, atrocious. I was surprised at how many minutes Brian Roberts ate for the Hornets last year - he played more than Eric Gordon. Speaking of EJ, he had an atrocious efficiency differential, largely due to having a very low ORtg. I suspect that will improve next year when his usage rate falls back under 30%.

As a Robin Lopez apologist, this graph gives me another occasion to express my dismay that he won't be a Pelican next season. Statistically, he produced great things for the Hornets, even though he routinely failed the eye test. Ryan Anderson's abysmal defensive rating almost caught up to his stellar offensive production. And I was really surprised by how few minutes Jason Smith played - his torn labrum really cost him a season.

Anything on the graph stick out to you?