Share All sharing options for: SBNation's top 100 in 2017: Davis and Drummond are Where?

Some of SBNation's NBA writers had a fun idea - ranking the NBA's top 100 players four years from now. Obviously, there's a lot of speculation involved, and very little of it can be data-based. A lot depends on the knee ligaments of Russell Westbrook and Derrick Rose (numbers 4 and 5, respectively), as well as the aging curve for a lot of veterans (Chris Paul, Dwight Howard, LeBron James), plus how players who haven't even played in the NBA will fare (Nerlens Noel, Andrew Wiggins).

Drummond and Davis were both 19-year-old rookies last year, which makes them easier to compare. The biggest difference between the two was playing time - Anthony Davis started 60 games out of the 64 he played in, and notched over 1800 minutes. Drummond, by contrast, started in only his last 10 games and played less than 24 minutes in 5 of those 10 starts. He finished the year just shy of 1250 minutes.

The disparity in playing time has two implications for our comparison: first, Andre Drummond has an extremely small sample size - around half a year of normal playing time. This means that extrapolating out his numbers in limited minutes, as Tjarks does, is a bit odd. He enthusiastically cites Drummond's per-36 minute averages without ever mentioning that Drummond has never played 36 minutes in an NBA game.

The second implication is that Drummond didn't play against top competition. Since the vast majority of Drummond's minutes were racked up against second-team units and in garbage time, the assumption that his gaudy statistical profile will remain unchanged when he starts 82 games is a bit naive. Anthony Davis's statistics were posted against NBA starters, and often against the team's best post defender. Davis certainly garnered more game-planning attention than Drummond, since Davis was the number one draft pick on a team that lacked any semblance of offensive talent for much of the year.

Even ignoring that Davis played against far better talent, it's hard to argue that Drummond was a more promising prospect statistically. Davis and Drummond posted almost identical ORtgs (114 and 113, respectively), but Davis did so on a 21.7% usage rate, almost unheard-of for a 19-year-old rookie, while Drummond used only 17.2% of his possessions. Drummond, due to his lower usage rate and the fact that he basically only dunks, had a higher eFG% than Davis, but they were very similar in true shooting percentage, thanks to the fact that Davis shoots a respectable 75% from the free-throw line while Andre Drummond shot 37.1% from the charity stripe. Nope, not a typo - 37%.

From a rebounding standpoint, Drummond was certainly better - his defensive and offensive rebounding rates were stratospheric last year (27% and 15%, respectively), a good bit better than Anthony Davis. It would be reasonable to expect a regression next year, since he posted a 50% increase in rebounds per 40p from college to the pros, which is extremely rare. Perhaps playing such a high percentage of his minutes against the second string and in garbage time inflated his rebounding rates.

Defensively, there's hardly enough of a sample size to say that either player is better than the other. Davis posted +1.1 Defensive RAPM versus Drummond's +1.3, both extremely good for rookie big men, but both with a sample size far too small to say anything conclusive. Davis fouled less and got more steals, while Drummond had more blocks.

Skills are where the comparison is pretty unequal. Davis is a lock for the 2016 US Olympic squad, while Drummond is a low-tier US Select Team player, and the difference in skills is the reason. As Tjarks points out, Drummond is freakishly athletic, but Davis has an incredible array of defensive and offensive skills at his disposal. He can drive to the basket, run the pick and roll and the pick and pop, spot up from outside, and run in transition. On defense, he can guard three positions and is a fearsome weakside defender. He has excellent instincts and plays passing lanes extremely well.

Drummond's skills are far more limited. True, he's bigger and a better leaper, but he's extremely limited on offense. He's not a good ball-handler, one-dimensional in the pick-and-roll, and is completely unable to stretch the floor. Here's video of the only field goal Andre Drummond has made beyond 9 feet. Seriously, look at his BR Shot chart: 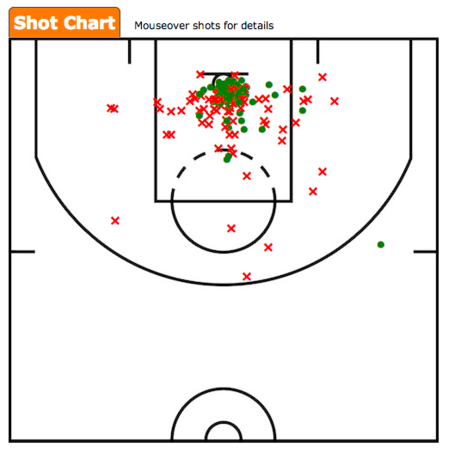 Drummond is incredibly one-dimensional on offense - he can dunk extremely well, but he's not above-average at anything else. On defense, he'll certainly be a great on-ball defender and has incredible athleticism, but I don't know if he has the instincts or awareness that Davis possesses.

I understand, this list is a fun exercise to talk about in August. It forces you to weigh a lot of variables like injury risks and aging curves that are difficult to compare. But some players, like Davis and Drummond, are at similar points in their careers and have similar injury histories. In these instances, it's a lot easier to make simple comparisons, and it's outlandish to say that Drummond will be better than Davis based on the data we have on hand today.