The Relationship between Usage Rate and Offensive Efficiency

Share All sharing options for: The Relationship between Usage Rate and Offensive Efficiency

The Pelicans will have three players logging significant minutes next year that have histories as high-usage, low efficiency scorers - Tyreke Evans, Jrue Holiday, and Eric Gordon. Here's their Usage Rate and ORtgs over the past three years

The general assumption is that their offensive ratings would rise as a result. However, there are a good number of questions that naturally follow - how much should they rise? Are players that have a very high usage rate more likely to see significant improvements if they reduce their usage rate down to more normal levels? In essence, can we construct an elasticity curve that can pinpoint how reductions in usage will yield improvements in offensive efficiency?

I haven't seen much research on these topics, so I tried to answer the first of those questions today - are changes in usage rate connected to changes in offensive rating, and if so, by how much?

Using Basketball Reference's outstanding Player Season Finder tool, I identified players that played a substantial number of minutes in both 2011-2012 and 2012-2013 (qualified for MP/G leaderboard). Using that data, I calculated each player's percentage change in usage rate from 2011-2012 to 2012-2013. In addition, I compared each player's offensive rating compared to league average in each year, and found the year-over-year change in offensive efficiency differential. With that data, I ran a linear regression, with Usage Rate % Change as the explanatory variable. Here are the results:

The relationship is highly statistically significant, as you can see by the extremely low P-value, but, as you would expect, it doesn't explain much of the year-to-year variance in Offensive Rating (around a .08 R-squared).

The key thing to note here is the coefficient - this regression implies that a 1% increase in usage rate would yield a 0.13 decrease in ORtg with respect to the league-average ORtg. The reason that it's a decrease of 0.13 instead of 13 is because the units on the explanatory variable (usage rate % delta) is a percentage, so you have to divide the coefficient by 100. In addition, it's important to remember that the explanatory variable is percentage change in usage rate, so if a player moved from 20% usage to 22% usage, that would be an increase of 10%, not 2%. The line fit plot might be instructive here: 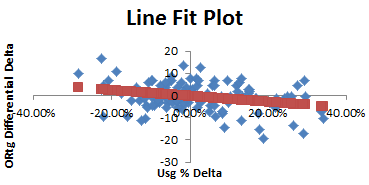 The red dots in the graph above represent the line of best fit based on the regression, while the blue dots are the observations. The residuals, for the truly nerdy among you, appear to be randomly distributed: 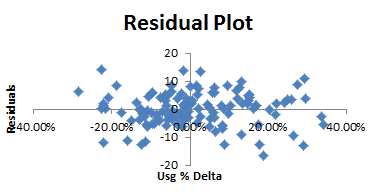 This analysis implies that usage rate has a small but statistically significant impact on offensive efficiency. However, this is important when making the argument that Holiday, Evans, and Gordon will see their offensive efficiency rise next year. In my mind, there are a handful of reasons that each player will be able to increase their ORtgs:

Since Tyreke has reduced his usage rate to 22%, I wouldn't expect to see him reduce it with his new role as a go-to scorer off the bench. However, Holiday and Gordon should both see substantial reductions. Were Holiday to reduce his usage to, say, 22%, we would expect to see his ORtg differential climb from -7 to just better than -5, all other things held equal. Now, that doesn't sound like much, but considering that we would anticipate Holiday also taking fewer long twos as well as facing less defensive pressure due to his better teammates, we could imagine Holiday climbing towards a league-average efficiency on offense. For Gordon, if he were to reduce his usage rate to 24%, he would be expected to see his offensive efficiency differential to rise from 5 points per 100 possessions below league average to just 2.5 points below.

To me, this provides substantial hope that Gordon and Holiday, both low-efficiency, high-usage scorers, could become significantly more efficient performers on a team in which they didn't have to play as the go-to scorer. In combination with other potential improvements, like a better offensive system and better teammates to reduce the opponent's defensive focus on them, I can imagine Gordon and Holiday both posting near league-average offensive ratings next year.