Dell Demps walks in a fellow GM's house, they talk for a moment, Demps walks out with the man's big screen. The dealer at work. It isn't stealing if they give it to you! Thoroughly edited to account for Al-Farouq Aminu signing with some analysis of that move at the end.

[Edit: Changed the middle section to account for reports that Al-Farouq Aminu has agreed to a contract. -Fish]

These trades keep getting better. I do not understand what Portland just did or why. But evidently when Dell Demps calls GMs just can't wait to give him stuff. Just about anything he wants.

Dr. Jason Calmes and I have been busy on Twitter behind the scenes. Mostly it has been educational for me, him leading me to scenarios and possibilities. Some of it has been incredibly humbling. In the end I think we talked through a plan that could work to get New Orleans more than anyone could have possibly dreamed.

Step one is to acquire Jrue Holiday. Since no salary is outgoing in that trade, Holiday must be traded into cap space. This is easy for New Orleans to do, as they are under the salary cap if they renounce their rights to their current free agents. Xavier Henry is actually the largest cap hold. Renouncing rights does not mean that a player cannot be resigned, but that either cap space OR an exception must be used to sign them. Note that by dropping under the salary cap New Orleans forfeits the Mid-Level Exception. Here is the situation after step one. In order to maximize step two, I will have Demps also waive Lance Thomas in the process. It will make sense, trust me.

[Edit: Going to include the signing of Al-Farouq Aminu in step one here with more information in the table. Aminu must be signed to the $3.7M contract prior to the Evans Sign and Trade. $3,749,602 is the maximum that New Orleans can sign Aminu for since his team option for the same amount was declined, as seen here. Still waiving Lance Thomas to maximize cap space.]

This means that it behooves Demps to use that cap space immediately. Tyreke's salary is larger than Lopez and Vasquez's combined, which will eat into salary cap space. $58.5 Million cap, subtract the $55,502,216 cap number. My math comes back with a $2,997,784 contract available in year one. With a 4 year contract and 4.5% raises means that Demps could possibly offer a 4yr/$12.8M contract. My preference would continue to be a player who can shoot the basketball. Carlos Delfino made $3M last year, and was not signed until August 13th. We can debate who that space is used on later. The important part is that it is possible. After whatever that deal may be comes to pass, we move on to step three.

[Edit: This is the maximum conceivable space I can see happening. It is likely that the actual space will be less, depending on the incentives in Holiday's contract. Evans contract will not effect cap space unless it is so front loaded (more than $12.1M the first year in cap hit) that the trade is no longer balanced. That would be a massive negative effect, rendering this impossible.]

Sign and Trade for Tyreke Evans and draft rights to Jeff Withey for Robin Lopez, Greivis Vasquez, and Terrel Harris. Once the trade is complete, agree to terms with Jeff Withey and Pierre Jackson. The Pelicans can use the draft exception in this case to sign both players, likely to minimum contracts. But wait! There is EVEN MORE! Demps still has yet to use the Room Exception of $2,652,000. A 2 year, $5.2 Million offer could draw a new player into the fold. Debating the "who" part of that is not the point of this article. It is simply to inform of the possibility. This is the end result.

[Edit: Using the maximum contract I can see New Orleans offering with the cap space. Again, using every cent of that cap space is not required, just potentially available. I would not expect Dell Demps to offer a four year contract at this point.]

The future is bright. Very bright.

[Edit: Some analysis of the Aminu signing]

After a night to sleep on it, I am coming around on the Aminu signing. The weaknesses of Anderson in the starting lineup are on the defensive glass and defensive in general. These also are Aminu's greatest strengths. While Aminu is not much of a jump shooter, the other four players in the starting lineup have demonstrated ability (Anderson, Holiday catch-and-shoot, Gordon pre-NOLA) or the potential (Davis, who improved on the pick and pop as the season progressed). Aminu alone will not cramp the floor. The closing lineup in high leverage minutes is unchanged, Holiday-Gordon-Evans-Anderson-Davis. I do not see any available free agent who was going to change that.

The one year nature of the deal does not hamstring New Orleans in the long run. Also, the character of the organization is demonstrated here. Sticking with a player who worked and committed to the plan is a good message to send to the league about the direction and attitude of the franchise. His cap hold next summer will ensure access to the MLE as the salary cap rises.

New Orleans does not terribly hamstring themselves next summer if they spend everything they can and push their committed salaries to $57,946,057. If Aminu pans out they can sign him with his bird rights. They will still have the full MLE available starting at $5.305M as seen here. As the Silver Screen and Roll demonstrates here saving copious amounts of cap space for the summer of 2014 is fool's gold if the hope is a franchise cornerstone. New Orleans already has one. And he's going to be even better this year. 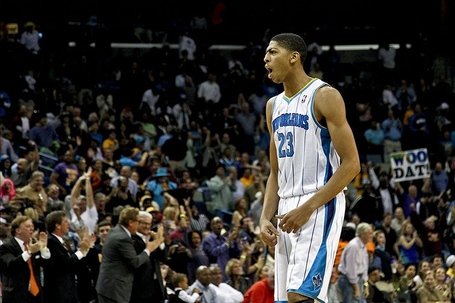