Usage and Efficiency Relationships. Various other tidbits for the Pelicans.

Share All sharing options for: The Path Forward: Contradictory Positions and Advanced Statistics

Today I aim to be a little more free-flowing. There are a couple tidbits of information, I think have gone unnoticed, to bring to your attention before I dive headfirst into the article's title.

First, as I have outlined here last week, the Pelicans are capable of offering Greg Oden something in the range of $3 Million for his first year's salary. I would hazard to guess the deal on the table is likely a 2 year deal with the second year being a team option. That the Pelicans are considered in this race with the Spurs and Heat is a story unto itself. New Orleans, through shrewd financial dealing, proper connections (thank you Monty Williams), and a franchise that is sprouting a good reputation is thoroughly in the hunt for a player with both teams from the NBA Finals.

But unknown to most, some new and important financial information has also come out recently. As seen here, Hoopsworld has updated the contract information for Tyreke Evans. As rumored, his contract is either front loaded or contains a significant signing bonus. This is excellent news, as I will show you in this hypothetical chart below (if Oden picks NOLA).

As I outlined here on July 4th, the Pelicans could take back up to $12.1 Million when trading for Tyreke Evans. It would be in their best interest to get as close to that number as possible since the trade does not, technically, use cap space. Instead the trade is using the trade exception (which is not a trade exception, which a team obtains by trading out more salary than it takes back), allowing the team to take back up to 150%+100k of the outgoing salary. This can occur even if the team is already over the salary cap. A bigger number upfront creates additional flexibility on the back end. Much as Ryan Anderson's relatively flat contract was considered the best contract last summer. Simplifying my point, cap space in the future is more valuable than cap space now. Because Anthony Davis is only 20 years old.

Second, speaking of Anthony Davis, he's been keeping busy. Eating evidently. Which is a great idea for him, although I would stick to Louisiana with our amazing selection of world class cuisine. This one you have to dig all the way down to the bottom to get to the good stuff.

New Orleans Pelicans big man Anthony Davis says he's bulked up to the 228-point range and hopes to be at 235 by the time training camps open in October.

I am surprised he is putting on the weight this quickly. Honestly I expect his playing weight to be around 235-240 for most of his career. For those concerned about his ability to play center, I would point to this tidbit. At 20 years, 4 months old he is already on his way (which, is not to say he is prepared to log 30+ minutes at center, yet) to having the necessary girth to play center. He already has the height and length to play center in the NBA. For a frame of reference, check out this picture. Yes, that is the best center in the NBA looking like a small forward beside actual centers from the past. For comparison sake. Please note that despite coming out directly from high school, Howard was only nine months younger than Davis coming out after a year in college. The weight listed in parenthesis is each player's current reported weight. All information on combine measurements come from Draft Express, as always.

Only 700 words or so in and now we can get into the meat of the article. Reaction has been mixed to the Pelicans moves outside of New Orleans. Zach Lowe of Grantland summed up the responses nicely in his most recent piece on every franchise's off-season here.

Covered at length here. Executives are both curious about the team's new six-man nucleus and skeptical that this group can take New Orleans over the mountaintop. The Pellies are betting on a lot of things, but the most important big-picture wager is on a 20-year-old Anthony Davis developing into one of the league's five best players. Most executives agree that is a good bet. But will he get to that level at the right time for this group?

The rest of the Pelicans' core is 25 or younger, so they can grow together to some degree, even though the age gap between Davis and the rest of them is meaningful. And the Pellies will surely explore moving both Ryan Anderson and Eric Gordon — anyone but Davis, really — if they decide this core won't be good enough to compete for a ring.

One caveat that has become a bit clearer over the last couple of weeks: It's possible the Pelicans could have nabbed their "good starting point guard" type by aggressively chasing Teague or Jennings in free agency (essentially using the Tyreke Evans salary slot) instead of trading two picks for Holiday. Holiday is a better two-way player than those guys, but he came at a very high price.

Another round up of reviews was compiled by our own Rohan here. First, many cite Robin Lopez's DEFENSE as something the Pelicans will miss. That should send up your "y'all didn't actually watch New Orleans" radar immediately. Brian Ball touched on this fallacy to an extent here. Second, writers harp on the high usage of Gordon, Holiday, and Evans along with their relative inefficiency. Thankfully, our own Brian also did some serious work on how efficiency and usage are related. Specifically, that those two advanced metrics ARE related in an inverse fashion. As usage rises, efficiency typically declines and vice-versa.

Writers have pointed out that the usage rates of Holiday, Gordon, and Evans must decline. Their concern at that point is "will the players be happy taking fewer shots". I do not buy it. Teams that win are generally happier, and the expectation that each will shoot less (and therefore their efficiency will increase) combined with the higher level of talent in New Orleans (again, Holiday and Evans were the best players on their respective NBA teams) can be reasonably tied to increased team success. Wins make a player happier than shot attempts. Unless that player is named Shabazz Muhammad, but I digress.

Here is the disconnect that evidently no writer on the national scale wants to put together. High usage cannot continue and the players are too inefficient. That usage MUST drop they say, but they fail to mention that the usage dropping (along with each player no longer always drawing the premier perimeter defender from the opponent at all times) will increase that efficiency. After confronted with that, they fall back to the players being unhappy due to lower usage rates and different roles without the ball (and the pressure, and the best defender available) in their hands. But again, they fail to tie the increase in efficiency, the lightened workload, and importantly the increased expected success into their equation for happiness. 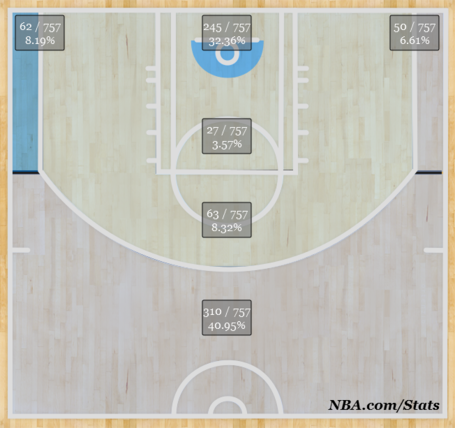 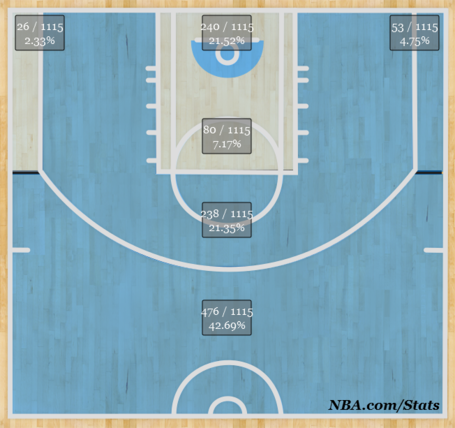 The first shot chart is Ryan Anderson in 2011-2012, the second is in 2012-2013. As you can see, Anderson dramatically increased his attempts from mid-range. Despite the fact that his mid-range conversion rate improved from 31.75% in '11-'12 to 42.44% in '12-'13, his eFG% and TS% both took a noticeable dive. This is all thanks to a lack of threats on the floor. Despite Vasquez's high assist rate, he did not effectively create space or improve scoring opportunities for the Hornets last year. His inability to beat his man shrunk the floor for everyone else, because help was unnecessary.

Specifically to Ryan Anderson he was assisted on 90.5% of threes in New Orleans (down from 99.4% in Orlando) and assisted on 72.2% of 16-23 foot shots in New Orleans (down from 94.1% in Orlando). All these stats courtesy of Hoop Data. This was created by the inability of Vasquez to properly space the floor (draw the attention of help defenders) and the added scoring responsibilities placed on Anderson with the reserve unit. A unit that was without any real distributing threat. Increased usage does not occur randomly (Anderson's usage increased from 21.2% to 24.0%), there are always underlying causes. In this specific case, a player shouldered a greater load with a reserve unit and usually lacked NBA scoring threats on the floor with him.

Just looking at this one player from last year, it is easy to project that his efficiency should increase. His time spent with the reserve units this year will also include Tyreke Evans, a much more gifted basketball player than any healthy guard the Hornets trotted out last year even with the starters. Evans, in turn, will spend a greater portion of his minutes on the floor facing the opponents reserves and with a dead-eye shooter in Ryan Anderson. Both players will become more efficient. The degree is unknown, but it is not a fantasy born of fan bias.

It makes perfect sense that Tyreke Evans will be more successful going against a reserve than a starter and that Ryan Anderson will have better opportunities to do what he does best with the ball in Tyreke's hands than say, Austin Rivers or Brian Roberts. Anderson will see his catch-and-shoot opportunities increases as a share of his total shots. He is playing with more talented teammates and being asked to create his own shot less frequently. Both of these factors increase his efficiency.

It is difficult to say just how much the players will improve as their usage decreases. And it is also fair to note that the team will take some time to gel as the season begins and roles are established. That period of time could be tumultuous and ruin the project in the earlier stages if widespread discontent sets in before success can be achieved. The schedule will have something to do with that, so I think we should all hope for a couple of trips into the Eastern Conference early on to boost the team's confidence.

But the stories of doom and gloom contradict themselves. High usage and the resulting low efficiency creates more losses. Lower usage and expected higher efficiency should create more wins. And winning is generally preferable to losing when it comes to competition in any form. "We'll give you a ton of shots but probably lose more than we win", sounds like a terrible free agency pitch to me.

The players all appear to be genuinely excited about the direction the franchise is headed. Tyreke Evans has "no problem at all" with the idea of playing small forward for some stretches. Jrue Holiday is taking advantage of the Team USA camp, which both Ryan Anderson and Anthony Davis are attending, to get a head start. Somehow a team with a funny name (Mike and Mike were making fun of it at 8:00am on Wednesday) is in the thick of a free agency pursuit with the Heat and the Spurs. Once again Dell Demps has created more flexibility on the back end of a contract by utilizing current cap space and maximizing his returns available in the CBA.

Oh, one more thing. New Orleans still has Anthony Davis. The front-runner for the center position with Team USA basketball for the next four years or more. The cornerstone of the franchise. It is important to note that Ryan Anderson will be the FIFTH option on this team. That either Tyreke Evans or Jrue Holiday will be the FOURTH option on this team. I find it difficult to point out a team in this league truly deeper than that.