What offensive changes can we expect for next season from New Orleans?

Share All sharing options for: Predicting the Pelicans Offensive Changes

An article on Nola.com states that Pelicans coach Monty Williams "has already been meeting with his assistants to change a significant amount of their offensive sets from last season." Given the drastic roster change since last season, changes to the offense are no surprise.

One significant potential change, as Williams already suggested, is an increase in team pace. Last season, the Pelicans averaged 88.5 possessions per 48 minutes, the second slowest pace in the entire NBA. Replacing Greivis Vasquez, long-hampered by his slowness, with the much more athletic Tyreke Evans and Jrue Holiday creates the opportunity to generate far more transition possessions. Last season, 9.9 percent of Vasquez’ total possessions were used in transition, where he scored 0.92 points per play, 283rd in the league, according to Synergy Sports. Comparatively, transition opportunities constituted 11.7 percent of Holiday’s possessions and a 24.4 percent of Evans’. At 1.02 points per play, Holiday scored at a respectable rate in transition, though his athleticism would suggest better results. Evans scored 1.15 points per play in transition, excellent for such a high volume of transition plays.

Tyreke Evans with the sweet move in transition (via Sacramento Kings)

Evans will often finish in transition with a Euro-step or rip through style move similar to the one above, often driving directly into the body of a defender. Evans’ exploits in transition take advantage of the unique combination of size, speed, and strength that help make him an effective NBA player.

Though Holiday was not excellent in transition, a transition play is inherently more efficient than a half court play for nearly every NBA player, Holiday included. Also, as Holiday moves to a team that will hopefully place an emphasis on avoiding the midrange jump shot rather than seeking it, Holiday may become more committed to getting all the way to the rim in transition.

However, the offensive changes will likely extend far beyond an increase in pace. As is often said, the NBA is a "copycat league." It is likely that Williams and his assistants are scouring the film of last year’s 76ers and Kings to find the sets in which Holiday and Evans excelled.

One derivation to the typical Sixers’ offense, added late in the season, was the use of Jrue Holiday in the post. These possessions were typically created by having Holiday suddenly stop on a cut through the lane and seal his man, waiting for the entry pass. 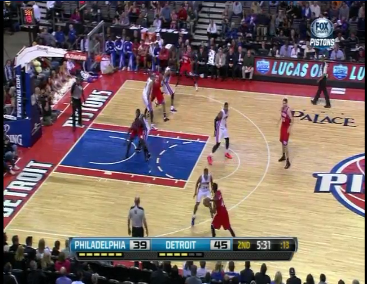 Though inexperienced in the post, Holiday excelled in a low volume of post ups last season, scoring 0.97 points per play on 32 post possessions, the 13th best in the NBA, according to Synergy Sports. Holiday uses his athleticism, touch around the basket, and touch around the basket to score efficiently in the post, leaving it up to the coaching staff to create these opportunities.

Like Holiday, Tyreke Evans also excelled in a low volume of post up opportunities, scoring 0.98 points per play on 55 total post ups. Unlike Holiday’s post touches, which were required a bit of basic misdirection or deception to create, the majority of Evans’ opportunities were isolation clear outs, often closer to the midrange than low block.

Along with the cut plays described, the Pelicans may try to create efficient opportunities close to the basket by running basic Flex offense style pin downs with Holiday and Evans receiving a screen then sealing their man.

Though the Pelicans’ offense may suffer restricted spacing in lineups that play Anthony Davis at power forward, the Anderson-Davis lineups should offer the opportunity to surround a posting guard with shooters, further enhancing their efficiency and allowing for a higher volume of post ups.

The likely increase in pace and transition possessions may also increase post opportunities for the wing players, as players running off the ball in transition are often able to seal defenders carried running to defend the rim.

To leverage Ryan Anderson’s skills in a higher paced offense, expect the Pelicans to develop an early offense play to free Anderson from three. This can take many forms, but one common semi-transition set around the league is the "Pistol". With Anderson functioning as the initial screener (a rim rolling big man would generally set the second screen) and popping wide to spot up as the ball handler attacks the paint off a second screen, the Pelicans would likely be able to generate open opportunities either from three or at the rim.

Grizzlies Pistol / EO Step Up (via How U)

The basic structure of the Pelicans offense will likely be a high volume pick and roll, drive and kick attack. However, by using occasionally specifically designed plays, sets, and reads to set up advantageous situations, the Pelicans can hope to maximize their offensive efficiency.

While it is the players’ responsibility to execute, the coaching staff must be able to put the players in the best possible position to take advantage of their respective skills, and Monty Williams appears committed to doing so.