Get To Know Jrue Holiday

Share All sharing options for: Get To Know Jrue Holiday

As any visitor to At the Hive has likely come to terms with at this point, the Pelicans traded for 23-year-old point guard Jrue Holiday, formerly of the Philadelphia 76ers, on Thursday. To acquire Holiday, the Pelicans surrendered 6tb pick Nerlens Noel and a 2014 top-5 protected first round pick, generating a wide spectrum of reactions. Some (like Rohan) believe the Pelicans mortgaged their future for limited short-term results, while others think that Holiday’s production outweighs the potential of future assets. Yet, regardless of our opinions on the trade, Holiday is now a New Orleans Pelican, and will be for the foreseeable future. With that in mind (and the beauty of an Anthony Davis-Nerlens Noel interior defense not), here is a look at what to expect from Jrue Holiday.

One of New Orleans’ fatal flaws last season was poor perimeter defense. Greivis Vasquez, Austin Rivers, and an oft-hobbled Eric Gordon struggled to contain penetration in most situations and did little to take offenses out of rhythm. Last season, 34.5 percent of opponents’ field goal attempts came from 0-3 feet. The then-Hornets’ opponents averaged 25.9 field goal attempts per game at the rim, 11th most in the league, according to Hoop Data.

In what promises to be an encouraging change for Pelicans’ fans, Jrue Holiday is a good defender. While he does struggle to defend some off ball actions, Holiday uses his length and athleticism to deny driving lanes while contesting shots. 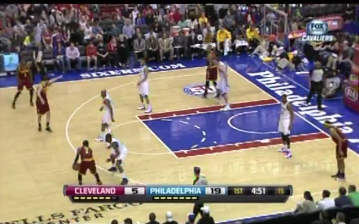 Here, Holiday is matched up against Kyrie Irving, a constant threat to attack the rim. Holiday is one of the few perimeter players comfortable pressuring opponents anywhere on the court. This sometimes results in getting beaten off the dribble:

(Also of note in that clip: Holiday often opens his defensive stance too much, allowing easier penetration).

However, Holiday’s pressure defense often forces opponents to spend more time getting into offensive sets, leaving less time to generate an efficient shot. While I think Holiday’s value as a defender may have been slightly exaggerated in attempts to justify the trade, he will never be considered a target for offenses like the guards he is replacing, and, with a better interior defense backing him, could be a near-elite defender. 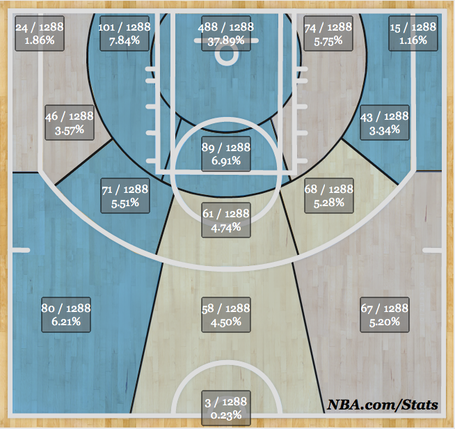 Though Holiday was not efficient last season, he has the skills to become very efficient offensive player. An inordinate amount of Holiday’s field goal attempts came from the mid range, from where he shot 40.3 percent. However, this poor shot selection may be due to the offensive system run by Doug Collins, who focuses on an archaic desire for mid-range jump shots.

Holiday gets to the rim well, but often settles for attempts from the mid-range or close to the paint but not at the rim. In the first clip, Holiday, a very good ball handler, executes a nice crossover and gets to the rim past Roy Hibbert. However, in the second he settles for a pull up jump shot. Notice how Holiday does not appear to be fully exploding off in the half court. Though maintaining control is valuable, Holiday is often hesitant to take full advantage of his athletic abilities. This leaves him balanced for the jump shot, but often results at more difficult shots at the rim, where he shoots only 50.61 percent, below league average.

Holiday’s greatest flaw around the basket is a tendency to avoid rather than embrace contact. As career 78.1 percent free throw shooters, a trip to the foul line is a very efficient opportunity for Holiday compared to his conversion from the field. Despite this, Holiday only generates 3.0 free throw attempts per-36 minutes, according to basketball-reference. Holiday will often attempt a floater or contort his body to avoid contact, both lowering his efficiency at the rim and decreasing his ability to draw a foul.

Despite these flaws, Holiday’s ability to get to the rim is very valuable, as it is key in setting up opportunities for his teammates. Last season, Holiday assisted 36.5 percent of his team’s made field goals, according to basketball-reference.

Holiday came into the league as a decent passer and has drastically improved since, adding several components to his passing repertoire. As the Holiday increasingly became the focus of the 76ers’ offense (his usage percentage increased from 21.8 percent in 2011-12 to 26.6 in 2012-13) he developed as a passer and creator.

One of his key improvements was an improved ability to find the roll man in the pick and roll – a valuable skill in his future pairing with Anthony Davis. Holiday was always capable of basic passes and impressive off-ball finds, but over the last couple seasons improved his ability to pass off the drive, both to the rolling big man and to spacing shooters.

Holiday has the requisite talents – a jump shot, athleticism, passing ability, ability to get to the rim – to be an excellent offensive player, and the Pelicans, with an effective pick and roll partner in Anthony Davis and secondary creators, should be able to harness his abilities.

Of course, a lot may change between now and the season. The Pelicans have reportedly offered Tyreke Evans a 4 year, $44 million dollar contract, and Eric Gordon is constantly liable to be traded or injured. The small forward spot is in doubt, but will most likely be filled by someone with the needed shooting ability to spread the floor for Holiday (Chase Budinger, Dorrell Wright, etc.), and Robin Lopez’s future at center is in doubt.

Though the roster may be in flux around them, Jrue Holiday and Anthony Davis create an imposing perimeter-interior tandem on both offense and defense for next season and the future.