After the first five picks of the 2013 NBA draft melted away my brain, there wasn't much left in the first place to process what happened at #6 -- the indescribable, searing elation at a Nerlens Noel-Anthony Davis future followed by the slow, creeping, insidious realization that not only had Dell Demps passed on Noel-Davis, he'd traded away the team's 2014 1st rounder to acquire a point guard who was only marginally better on offense than Greivis Vasquez in 2013.

It was the lowest low, mere minutes after the highest high; I drove home furious, a wave of enraged Tweets already unleashed, visions of thunderous Noel block after Davis block fading, fading, fading.

I write most frequently to express mostly finished ideas, to explain what's done, to convincingly establish what I think I know.

That's not the case tonight. I write this now to think.

And so here we go to the analysis of what we'll most likely look back at in five or six years as an era defining trade for the franchise -- what exactly happened on Draft Night 2013, and what happens next?

I'll begin by submitting a contract for your approval; I'll put aside the unequivocal horror I felt when I first heard of the trade, if you'll dismiss for now the idea that being an "All Star" is incontrovertible proof of a player's value. It can show value, yes, but it's a descriptor that captures such a wide range of players based on so many uncontrollable factors -- injuries, perception, yearly regression -- so as to be far less meaningful than many seem to assume.

I got "but... All-Star!" thrown at me at least as many times last night on Twitter as I received "but... coach's son, winner!" a year ago after a similar, Austin Rivers-themed outburst. Jrue Holiday was an All-Star, yes, but let's go deeper.

Jrue Holiday turned 23 a couple weeks ago, a product of Los Angeles, California and UCLA. He's 6'4" in shoes with a 6'7" wingspan and is a relatively hilarious person in general.

His statistical line is an interesting one to parse; due to the inanity of Doug Collins' offensive system, Holiday took a disproportionate number of long twos (usnfish's "dumb zone") during his time in Philadelphia. From 2012-2013: 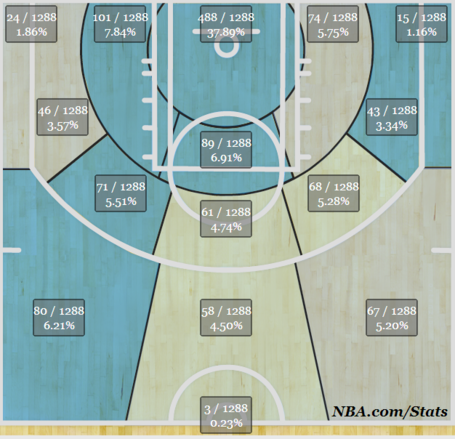 There are three mitigating factors here. First is the issue of system; if even 2 or 3% of Holiday's long twos in Collins' system turned into threes in Monty Williams' system as New Orleans hopefully moves in sync with the league's progressive analytic teams, pretty sizable rewards in overall efficiency can be realized.

And third, Holiday essentially was the Sixers' offense last year. He was forced into the fourth highest usage rate for a starting point guard (27%) last year in the NBA behind only Westbrook, Parker, and Irving; with a healthy Eric Gordon alongside him in 2014, his usage rate should drop closer to 20% where it belongs. It should also be noted that until around the All-Star break last season, Holiday was able to maintain efficiency at high usage before burning out over the tail end of the year.

Holiday's elevated turnover percentages (17.3% last season) are more of a concern, even if they're not at Vasquez levels (18.6%). So is his inability to get to the free throw line (3.0 FTA/36) despite his ability to get into the paint.

He's a very capable defensive point guard; I'd highly recommend this review of his defense from Liberty Ballers' Rich Hoffman. His conclusion in that piece: "As far as Holiday's isolation defense goes, cheating, and trying to do too much in the process, is my biggest complaint. Still, he does a lot of great stuff defensively, especially creating turnovers without fouling." Holiday plus a healthy Gordon has the makings of a very strong, very pressure-oriented perimeter defense.

Still, I'm not a huge believer in the value of "elite" point guard defense; with modern rules and the way the modern game is played, every top offensive point guard must be contained by scheme far more than individual defensive effort. It can help, but wing and post help are still far and away the most important components of containing a Chris Paul or a Tony Parker.

Switching gears back to offense, pitting Holiday's fourth season against the fourth seasons of contemporary point guards can be instructive:

Many conclusions to draw here, some illuminating, others depressing. For starters, Holiday had a far larger role in the offense in his fourth year both in terms of scoring and creating than most of the guys on the list, save Westbrook and Rose who were basically stars at this stage.

Holiday's efficiency figure, though, as much as I tried to justify it previously, really is eye-catchingly bad next to the remaining numbers.

Even if we back his usage down to around 20% to construct a usage-efficiency curve of sorts based on the usages and efficiencies Holiday has previously posted, you'll have a hard time making a case that he'd hit even Teague-level (+0.1) performance at 20% usage, given his career peak is -3.3 (at 21% usage).

The two most depressing aspects of the above table are likely the similarities in numbers of Greivis Vasquez (a far more efficient scorer than Holiday last year despite occupying a similar role on a very, very poor team that required him to play a go-to scoring role) and Jeff Teague (a player with near carbon-copy assist/turnover numbers and significantly more efficient offense, who will be (a) cheaper than Holiday and (b) will not cost Nerlens Noel and a 2014 1st rounder).

The biggest (and arguably only) positive takeaway is Holiday's age. Still, I can't help but feel that anyone claiming Holiday to be a top-10 (or even, as I've seen some places, top-5!) point guard on the basis of one reasonably strong half of one season followed by a second half during which he cratered is more than a little misguided. The evidence just isn't there. It's why I'm so wary of those running around yelling "All-Star!" Dig deeper, and whether or not he deserved to be one last year (he did), and things get far more troubling.

Could he develop into a surefire top-5 to 10 point guard? Sure. But that's where we get to what we traded for him.

Nerlens Noel and the 2014 First Rounder

The defensive potential here was just staggering; Noel was the first collegiate player in 16 years to average 9 boards, 4 blocks, 2 steals, and 59% from the field. Minus the knee injury in January, Noel's an easy #1 overall pick. But of course, the knee injury's impossible to erase now, and it's undoubtedly what forced his almost surreal drop. In a post-Oden world, a big with Noel's injury history will be excessively scrutinized regardless of how healthy every team doctor declares him to be.

Noel was the #1 player on my board, the only guy I'd have taken over Trey Burke, simply for the defensive pairing he'd have made alongside Anthony Davis. But I don't really mind Demps' trade of Noel himself, per se. In an ideal world, I'd have swung for the fences with him, but torn ACLs are and should be important considerations. Noel for a player you think might develop into a dominant point guard in a couple years? Even if I don't believe Holiday is that guy, sure.

But the 2014 pick is really what makes things ridiculous. The most common argument I've seen pertaining to this is that New Orleans is now "competing for the playoffs." Okay, yeah, sure. A team that finished 28th in defensive efficiency, that does not currently employ a single small forward, and whose starting shooting guard may be irreparably broken wants to enter win-now mode.

Don't get me wrong; it's not impossible, and I'll be rooting for it from here on out. Get a healthy Gordon, improvement from the already stellar Anthony Davis, a strong 3-and-D signing at small forward like Dorell Wright, and a massive turnaround on defense, and it's possible. But it's unlikely, and that's critical.

Thinking of future outcomes in terms of absolutes rather than probabilities is suicide for a general manager. New Orleans likely won't be terrible enough next year to draft in the top 5 (where they'd retain the pick), but as it currently stands and with all the health concerns still surrounding Eric Gordon, slots 6 through 14 are still their most likely outcomes. usnfish will review the salary implications of the trade in more detail (they're less dire than I originally suspected since the #6 pick's salary is off the books), but at the same time, a player like Andre Iguodala that might put the team over the top and into the postseason, is virtually unreachable.

As far as the pick itself goes, it's true that Dell Demps didn't give away a shot at Andrew Wiggins or Julius Randle or any of the very top names. At the same time, it's already a deep draft; Wiggins, Randle, Aaron Gordon, Marcus Smart, Glenn Robinson, James McAdoo, Dante Exum, and Andrew Harrison are all guys with top-5 potential in 2014. Lottery picks in next year's draft are valuable; you really don't have to look any further than the trade offers Cleveland tossed out in exchange for this year's #1 overall pick. Nearly every one of them involved some combination of 2014 picks coming back for 2013 ones.

Essentially, New Orleans traded the top prospect of the 2013 draft (reasonable due to his injury history) and most likely a 6 through 14 pick in the 2014 draft (a perfect spot to find a cheap, cost-controlled complement to a Gordon/Anderson/Davis core) for a fringe top-10 to 15 point guard.

That's what it boils down to.

The End of the OKC Approach

It's a construction approach gaining in ubiquity across the league. Philadelphia's trade for Noel puts them on that track exactly; the 76ers will easily compete for the league's worst record next season while they stockpile future draft picks. Cleveland's maintained the path steadily, opting to add picks and young players over veterans even as the team struggles. New Orleans too was set on the same track once David Stern vetoed Dell Demps' original Chris Paul trade.

But the Holiday trade jars everything lose; New Orleans isn't planning on visiting the high lottery for a third consecutive year the way Oklahoma City did, the way Cleveland could next year, the way Philadelphia very well might in a couple of seasons. Their title window's yet to open of course; that's entirely contingent on Anthony Davis. But Demps has decided enough of the core is now in place that another trip to the well isn't necessary.

And this eschews a very important financial consideration -- the value of the rookie contract. Draft Trey Burke at #6 and have him fail to reach your perceived pre-draft ceiling, and financially, all you've committed is the equivalent of two veteran's minimum contracts. Pay Jrue Holiday $10M a year though to hit your perceived pre-trade ceiling (and make no mistake about it, he's not nearly there yet, All-Star appearance notwithstanding) and have his growth stall out in a couple years, and the implications for financial flexibility are far more significant.

With their three first round picks immediately following Kevin Durant, Oklahoma City took Russ Westbrook, James Harden, and Serge Ibaka -- three diverse players with distinct stylistic backgrounds running the gamut of positions on the floor, all on rookie deals. With his first three first round picks immediately following Anthony Davis, Dell Demps has essentially taken Austin Rivers and Jrue Holiday -- two players with three picks, one very, very poor and without a position and the other marginally above average and earning $10M a year.