Share All sharing options for: Adjusting The Narrative: Austin Rivers

[I'm very excited to introduce At the Hive's newest front page writer today: Joe Moore. Give him a warm or cool welcome today depending on your hemisphere of choice, and enjoy. -R]

Simply put, Austin Rivers is bad. With a little more nuance, Austin Rivers was not just unproductive in his rookie year, he actively damaged the team. Of all the players who appeared in at least 20 games and averaged 15 minutes per game, Rivers had the second fewest win shares per 48 minutes, trailing, or rather leading, only Michael Beasley, according to basketball-reference. Rivers’ true shooting percentage was 5th lowest among qualified players. His overall rebounding percentage of 4.6 percent, 1.1 percent below the league average for guards, ranked 11th lowest.

Rivers’ play this season inspired a piece by ESPN’s Kevin Pelton suggesting he was on pace for the single worst season ever. This was not an isolated opinion. A piece at At the Hive began with "Austin Rivers has been terrible." 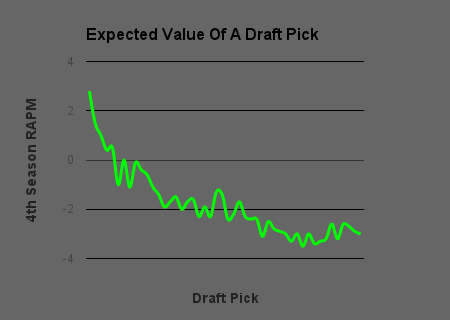 The circumstances surrounding Rivers and Green are obviously different. Green has different physical attributes and basketball skills than Rivers, and found his way to an organization capable of maximizing his value, but the point stands. A first year failure –and Rivers did fail- is not an NBA death sentence. With the support of the San Antonio Spurs, Green committed himself to improving and is now a very valuable NBA player.

What does matter is why Rivers was so incredibly bad, and whether he is able to make significant improvements.

Offensively, though his final production was poor, Rivers showed a few skills that could be the building blocks of an efficient offensive game. 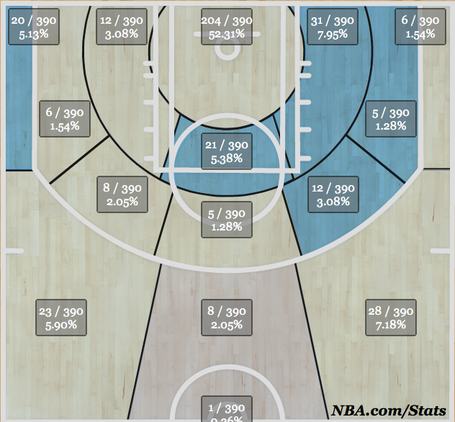 Here is a chart of Rivers’ shot attempts by location. 52.31 percent of Rivers’ field goal attempts came at the basket, a percentage comparable to many big men. Though a desirable location frequency, Rivers’ shot selection is skewed by inefficiencies elsewhere. 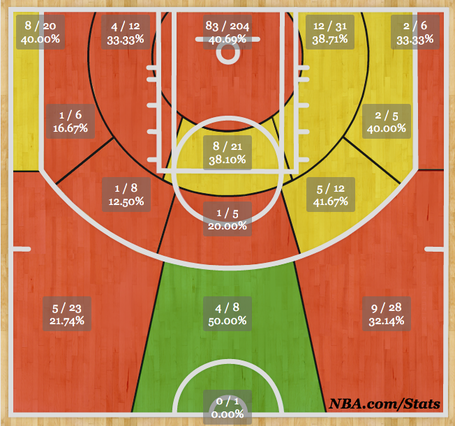 This chart displays Rivers’ field goal percentage from various zones on the court. He struggles to shoot, and seems to realize it. In spot-up situations, he shot only 35.8 percent, scoring 0.89 points per play, 221st in the league according to Synergy Sports.

Here is an example of a typical Rivers jump-shot. There are several flaws with his shooting form. Notice how the shot is broken into two motions, a hitch that decreases the control of the shot and increases the time taken to release. Also, Rivers leans back during his shooting stroke (one of the few traits he shares with Anthony Davis) forcing him to rely on his arm and upper body strength for the shot.

Though this is the highest of standards, compare Rivers’ shooting for to Stephen Curry’s. Curry shoots with a smooth, constant motion, and though he straightens out, he never leans back during his shot. Curry’s release is also far more compact and has little to no lateral motion, unlike Rivers.

Due partly to his flaws a spot up shooter, Rivers creates most of his shot attempts for himself. According to Synergy Sports, a combined 60.6 percent of his offensive possessions are used in isolation or a pick and roll.

To become a successful NBA player, Rivers will have to develop his shooting ability and off-ball skills. While Synergy’s logging is imperfect, it recorded only three shot attempts of cuts for Rivers all season. Rivers concentrated his offensive efforts on the least efficient play types, often at the expense of more efficient opportunities.

Rivers does not appear to have the physical attributes to become a consistently efficient, high usage on-ball scorer. An effective shot along with the ability to create opportunities off the ball would drastically impact Rivers offensively, allowing him to convert opportunities created by others while decreasing his reliance on a desperation drive when creating his own opportunities. Of course, an improved jump shot should not lead to a drastic increase in mid-range attempts, inherently inefficient shots. However, the threat of a pull up jumper off the pick and roll or a spot up jumper off a pass could shift defensive pick and roll coverage and cause harder close-outs, allowing Rivers to get into the lane in a more controlled situation.

In his first season in the NBA, Rivers’ most encouraging skill was his ability to get into the lane. Though I previously attributed part of his concentration of field goal attempts, 52.31 percent, to his poor jump shot, his ability to get into the lane with such frequency is a skill in itself. Unfortunately for Rivers, the value of his penetration is limited by his failures once he gets into the paint.

According to Hoop Data, the NBA averaged 64.7 percent shooting at the rim and 39.9 percent from 3-to-9 feet. As the shot chart displays, Rivers shot 40.69 percent in the restricted area and 37.5 percent from close to the basket but outside the restricted area (nba.com uses separate zonings from Hoopdata, but Rivers’ field goal percentage at and around the basket is very bad regardless).

Here are four drives that display both his strengths and flaws. Though not explosive, Rivers is quick with the ball, both in transition and in halfcourt, and is capable of getting by many defenders. He is able to change direction and hesitate while maintaining his forward momentum.

However, he lacks the athleticism to get clean looks, as defenders can often recover while helping big men are able to rotate, and does not have the touch to consistently convert more difficult ones.

On the first attempt, Rivers gets by Danny Green and all the way to the rim, where he attempts a Tony Parker style wrong hand layup to get the shot off as quick as possible. However, he is not athletic enough to elevate to the basket, allowing Green to pressure the shot from behind while Duncan blocks from the front.

In the third attempt, Rivers does an excellent job taking advantage of Chicago’s pick and roll defense by crossing back over and is able to drive at Joakim Noah. However, Noah, a very mobile center, is able to pressure Rivers through the drive, resulting in an off balance layup high off the glass. Though this attempt went in, Rivers has struggled to consistently convert on similar drives.

Rivers will often attempt a floater type shot in the lane, with limited success. Though he coverts in the fourth clip, he struggles with pressure and when off-balance, and is inconsistent even in ideal conditions.

Rivers ability to penetrate is impressive; the results of that penetration, not as much. While a initial struggles finishing against a new level of athletes should be expected, he will likely need to make drastic improvements to become an efficient scorer.

As with his jump shot, Rivers interior struggles need not be permanent. Though finishing is often a product of athleticism, a well-practiced floater, more consistency with finishing strategy, and familiarity with help defense could improve his efficiency around the rim.

As a passer, Rivers showed flaws both in awareness and execution. Rivers turned the ball over on 11.59 percent of his used possessions, compared to a league average of 11.48 percent, according to Hoop Data. His passes were not consistently on target. This, however, is to be expected from a young player adjusting to the NBA. More worrisome was Rivers’ awareness as a passer. Rivers’ assist rate of 19.89 percent was below the league average for guards of 22..04 percent. He often made the incorrect read off the pick and roll and was not adept at passing off his drives to shooters.

Defensively, Rivers often struggled with positioning and was ineffective as a help defender. His size limited his defensive ability against many match-ups, and he clearly had not mastered the nuances of pick and roll defense. He was, however, a capable on ball defender. While Rivers will likely never be a highly impactful defender, many of his struggles can be resolved as he comes to understand the intricacies of NBA level defense.

While Rivers may never be a star, his flaws as a rookie were not necessarily indicative of a failed NBA career. Rivers does not have the offensive ability to warrant the usage his style of play suggests, and is not yet a good enough passer or shooter to operate as an initiator or an off-ball shooter. However, his driving ability can serve as the basis of an efficient offensive repertoire, and with significant improvements, he can become a potentially valuable offensive creator.