It's a distinct possibility that three of the top five or six players in this year's draft will have missed, through injury, both the NBA Draft Combine as well as individual team workouts. But while fellow center Nerlens Noel seems to be a near-consensus #1 pick regardless, Alex Len appears to have a slightly less predictable future. Draft Express currently has him in their #4 slot to the Charlotte Bobcats, but it'll be interesting to see if that holds as individual workouts and interviews continue. 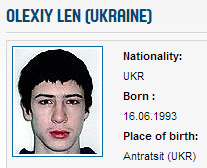 He played for the Ukrainian national team as a teenager, participating in the 2010 FIBA Europe Under-18 Championship, where he led all players in blocked shots and offensive rebounds (he finished second in overall rebounds, trailing current Raptor Jonas Valanciunas). Originally recruited to Maryland in 2011 by Gary Williams, Len completed his move over under new head coach Mark Turgeon.

Len's freshman year was watched relatively closely since international scouts, and while he showed flashes, his season was disappointing overall. As a sophomore though, Len made an impact immediately, dominating top recruit Nerlens Noel in the season opener with 23 points, 12 rebounds, and 4 blocks. From there, his season progressed nicely, the hype growing accordingly.

It's of course a bit difficult to tell what this really means at the collegiate level. That rate was good for 20th in the NCAA, but at the same time, Len finished with the exact same defensive rebound rate as shooting guard prospect Kentavious Caldwell-Pope and at 0.4 higher than Cody Zeller, who's frequently dogged for a lack of rebounding ability.

Len's rates from the field were certainly adequate; 69% from the free throw line and 55% from the floor (as well as 36% on jumpers) suggest that Len has good touch both around the hoop and from some range. His overall efficiency figures are similarly impressive (115 points per 100 possessions and a 24.7 PER) though his usage was very low (15%). Defensively, Len's 3.0 blocks per 40 minutes ranks among the country's best, and as a sophomore, he improved his turnover rate significantly (0.15 from 0.25 as a freshman).

Skills: Len's most important skill is his size; the fact that he's so quick, so coordinated, and frequently, so explosive out of his 7'1", 255 lb, 7'3.5" wingspanned frame is remarkable. In many ways, it's a quality he shares with one of my favorite 2012 prospects Andre Drummond. Few players at this size can move their feet this well, and that's obviously something that has huge ramifications on the defensive end of the ball. It's a shame that Len wasn't able to participate in combine drills; his lane agility in particular would've been an interesting measurement to see.

Because of his size, strength, and quickness, Len's defensive potential is enormous. While he's probably a better help than iso defender at this point, his recovery ability in one-on-one situations is already impressive. A Len-Anthony Davis defensive front court would seem to have great promise.

Offensively, Len finishes extremely aggressively at times, dunking over defenders effortlessly and using his footwork to move through the paint without ever putting the ball on the floor. He keeps the ball high and has shown the ability to fake out defenders simply through his footwork. The aggressiveness is certainly not a trait universally on display, but when the effort is there, Len has a gear that most bigs simply do not.

Conclusions: Len may prove to be the 2013 draft's Damian Lillard, rocketing up draft boards over the past month. While a selection at #1 overall still seems very unlikely at this point, both Charlotte and Phoenix passing on him at #4 and #5 seems implausible as well.