Jrue is Catching Fire (get it?)

Four months ago, I looked at how Jrue could hope to change his ways and become a better player. The flow of the discussion went like this:

1. Discussed his break even value, based on his contract, through win shares. The theoretical value of each win share is 1.5 (according to my simplistic assumptions that average teams should be paying right around the salary cap). This means using Jrue's salary this season (~9.7 million), he should be producing around 6.5 wins by the end of the season which means that in a 19 game span if we assume linearity and uniformity, he should have produced 1.5 win shares at THIS point of the season and will still produce 5 more win shares in the Pels 63 games. In reality, he's only produced 1.1 wins. Not close enough.

2. We looked at primarily the "offensive" part of win share (since defensive win shares are closely tied to the team's defensive rating). This included discussion on his:

Today, we'll examine the early returns of Jrue's flight as a Pelican (just had to put that in somewhere). Shot distribution was one of my biggest worries, as most of us are accustomed to Monty Williams mid-range acceptance. By the numbers, it might appear I (and some of us) were right: 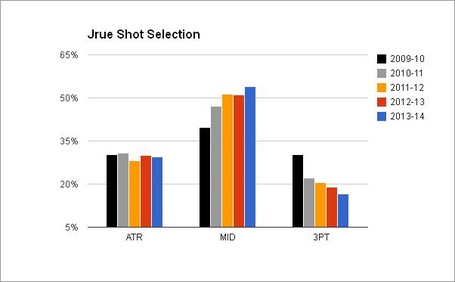 The amount of at the rim shot attempts have remained consistent through the years, but the amount of mid-range jumpers, shots taken being 4-24 feet, have increased up to 54.4% That shouldn't be surprising -- CP3's number of midrange jumpers rose by 2% when he played under Monty Williams. Similarly, Vasquez saw an increase of 6% when he was given the starting job in NOLA and Jarrett Jack saw a 20% increase in mid-range attempts.

Although this part of Jrue's development isn't going as well as most hoped, could lineups be partially to blame? He's only played 284 minutes minutes without Aminu, 400 minutes without Tyreke and 65 minutes without both of them. Additionally, consider that our best three-man offensive group (Davis-Anderson-Gordon) has only played 72 minutes with Jrue and the fact that Jrue is 14th in the league in ToP (time of possession).

That's quite a lot of time spent with at least two "non-spacing" players...

Besides the 4-9 foot range, Jrue's hitting at or above average at all areas of the floor. In fact, he's become a pretty good 3-point shooter in his first 19 games as a Pelican, surpassing 40% for the first time in his career.

Jrue's shot attempts haven't decreased -- it's remarkable really -- as he's attempting just one less shot per 36 and yet, his makes are still about the same.

So far, Jrue's definitely been surrounded by more effective teammates. Back in 2012-13, the Philadelphia 76ers were the 26th rank offensive team in the league (102 points per 100). This year, the Pelicans are the 7th best offensive team in the league (and will probably rank somewhere in the Top 10), scoring 108.1 points per 100. Between Davis (121), Anderson (128), Smith (110) not to mention the still struggling Gordon (104) and another struggling Evans (98), Jrue's never had this many capable teammates. In fact, without Holiday, the Pelicans are scoring 109.8 points per 100. With him? 110.7 points per 100. I think it's safe to assume that Jrue's struggles with non-offensive threatening teammates are done.

This season? After a breakout game against Utah (after struggling for 7 games following opening night), Jrue has literally taken flight. During our last 11-game stretch, Jrue has averaged 16.6 points (50%-40%-81.8%), 5.5 rebounds, 8.7 assists and 3 turnovers. This streak has yielded an offensive rating of 116 points per 100 -- that's a healthy +9 points above average!

Want to know something even more enticing? Remember that 54.4% shots attempted from midrange figure? It's held at 44.1% during the fabulous 11-game stretch. For those who require a better picture, consider the following players that have produced seasons similar in number (but NOT in manner) to Jrue's 11 game stretch:

Defensively, he's everything we thought he was going to be: a menacing on-the-ball defender and an average~good team defender. In fact, he's been one of the best isolation defenders in the league this season, and I think the past few seasons as well. I have no Synergy subscription to verify the past few seasons, but Jrue allows just 0.43 points per 100 in isolation (a category that consists of 11.6 percent of his defensive "possessions"). If there's one defensive category in Synergy that should impress you, it's the "isolation" numbers (since those are, I THINK, true isolation possessions). And Jrue's the top at it. Small sample size aside, he'll be among the leaders by the end of the season, probably in the 95tth percentile.

At the end of it all, the question begs itself: Can Jrue keep it up and if he does, will he be worth more than his salary this year?

To answer the first, to some degree, yes. A lot of Jrue's resurgence has centered around the pairing of the AD/RyNo combo -- a roll/pop duo that's about as perfect as you want it, if you're a ball handler coming off a screen. Now that AD's injured, he'll see a much less devastating combo of Smith/RyNo. It's still an effective twosome, especially considering a weakside consisting of Gordon and Morrow. I'm also excited about the Aminu/Ryno experiment and the "FREE WITHEY" movement.

If he continues along his current trend and, depending on how our defense shakes out (since that's the other part of calculating win shares), a WS/48 between .130 to .150 shouldn't be out of the question. Check out this LIST and notice the players whose defensive ratings sit in the 106~109 range.

Assuming Jrue plays in 60 of the 63 remaining games and averages around 34 minutes per game, he'll produce anywhere between 5.5 to 6.4 wins. That's worth around 9 million and maybe more, not far from his salary this season. In effect, Jrue is playing and getting paid within the same ballpark and that's not an entirely bad thing for a quasi-star who is still a ways from his prime. And we haven't even touched on his apparent leadership abilities. So I'd say, despite all the skeptics (including me) this past offseason, Jrue is on pace to earn his contract. Let's just hope the recent trend doesn't end up being a mirage.

Stats were taken from Basketball reference and NBAWowy.