Share All sharing options for: Pelicans bested by Rockets, 107-98

Anthony Davis had just scored six consecutive points and the Pelicans found themselves up 94-91 on the road against Houston. Throughout the night, New Orleans had been fortunate that the Rockets could not convert open three point attempts, going just 4-24 from behind the arc. Yet, when it mattered most, Houston made consecutive three point baskets, one from Jeremy Lin and one from James Harden. Over the last four minutes of the game, the Pelicans would commit two costly turnovers, settle for two low percentage shots (Al-Farouq Aminu long two, Ryan Anderson step back three pointer under a minute), and allowed two Houston offensive rebounds into four points. Winning time was not kind to the youngest team in the NBA.

The Pelicans, as I noted in the game preview, settled to single cover Dwight Howard throughout the game. While the box score tells you this was largely unsuccessful (Howard scored 24 points on 12 FGAs), I would disagree.  Six of those points were second chance points and Howard committed eight turnovers. The Pelicans did a good job digging at Howard in the first half to create those turnovers, but they got away from the tactic in the second half. Secondly, when he would back Anderson into the paint the Pelicans did not foul at the rate any pundit would expect considering Howard's relative struggles at the line.

Much will be made of the embarrassing disparity at the free throw line. The Pelicans attempted just 8 free throws to Houston's 32. Part of this is thanks to some questionable officiating to be sure. Two things I wish Monty Williams would be in the ear of the officials early on are: fouls on Tyreke's drives and fouls on attempted lobs to Davis (he is consistently undercut by defenders when he is most vulnerable). Behavior like that would not be tolerated long against other superstars in the league.

But the larger cause for concern was shot selection -- the Pelicans settled for too many long twos. Against the Rockets, New Orleans went away from initiating their offense quickly and settled for a more deliberate pace. This predictably resulted in only 4 fast break points. As you can see from the Pelicans shot chart below, the majority (50.5% - 47/93) of shot attempts occurred in the dumb zone. Long twos do not result in free throws. Those 47 attempts turned into 32 points, good for a paltry 68.1 ORtg. 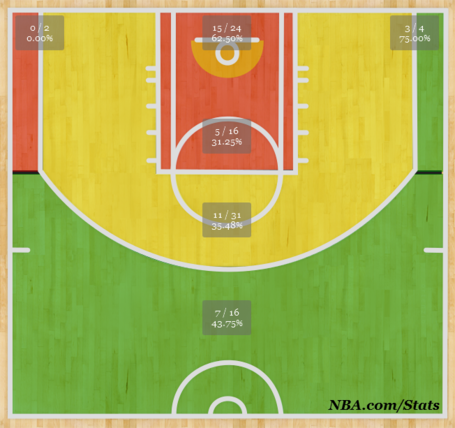 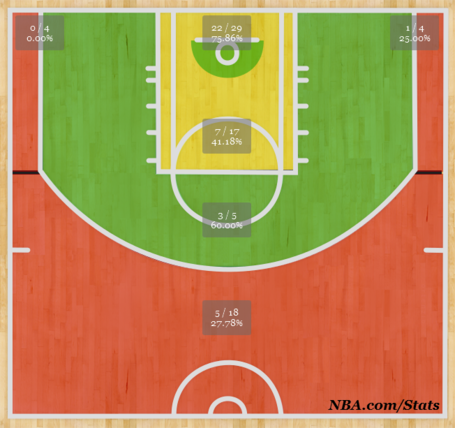 - Dwight Howard put up 12 points, 10 rebounds and 6 turnovers. The Pelicans played mostly single coverage on him, but Jrue Holiday and Al-Farouq Aminu were digging down at the ball on his initial move successfully.

- Ryan Anderson had 14 points and 7 rebounds and left quite a few points on the floor. He missed three WIDE OPEN three pointers in the first half alone.

- Speaking of leaving points on the floor, the Rockets went 2-16 from behind the arc in the first half and few of those shots were forced. It was less about the Pelicans being good defensively and more about the Rockets missing frequently.

- Houston attempted 15 free throws in the first half. The Pelicans attempted only 5. If only Tyreke flopped more on his drives instead of attempting to actually make the shot...

- The critical point was with 4 minutes to go in the second quarter. James Harden had just been called for traveling and the Pelicans were down 38-47. New Orleans went on a 14-5 run to end the half and Dwight Howard was called for two offensive fouls and a technical foul in that stretch. Austin Rivers and Ryan Anderson made three pointers from nearly the exact same spot and Anthony Davis contributed four points of his own.