The Pelicans went 1-4 on the road trip. Now for an autopsy.

Share All sharing options for: Road Trip Wrap Up

The Pelicans boarded the plane bound for Denver sporting an 11-10 record, coming off back-to-back wins against Detroit and Memphis. The road trip was expected to be a tough one -- facing four teams above .500 and trips to some of the least hospitable arenas in the NBA. Anthony Davis was still recovering from a non-displaced fracture in his left hand while Tyreke Evans had just tweaked his already twice sprained left ankle. The chances of returning from this road trip at .500 or better were at best, bleak. The predictions sadly turned out to be correct.

The Denver game was awful and our Game Thread only garnered a paltry twelve posts. While the Pelicans were not terrible offensively, they were unable to rebound the basketball. Basketball-Reference's box score puts the Denver offensive rebound rate at an absurd 39.5%, as seen here. As I noted during the game, the Pelicans missed a number of WIDE OPEN three point attempts. Altitude fatigue probably played into this, as did the heavy load on Ryan Anderson's shoulders since the Anthony Davis injury. However, good news came in the pregame: Pelicans Radio Host Sean Kelley said before the game that Anthony Davis may return sometime during the road trip.

Golden State welcomed the Pelicans with the return of Andre Iguodala. Being his first game back, Iggy played a light load and was generally ineffective. However, he did produce quite possibly the best highlight dunk which resulted in no points so far in the season. The game was not as close as the 104-93 score might indicate because the Warriors controlled this game throughout. Our game recap is one of the most negative we have had this season and rightfully so. I still do not understand why the Pelicans insisted on posting up Ryan Anderson on a defensive minded combo forward like Draymond Green.

Surprise! Not only did Tyreke Evans and Anthony Davis return for the second night of the back-to-back against the Clippers, but Dell Demps was dealing again! Alexis Ajinca, former 20th pick in the 2008 draft, was signed by the Pelicans. While he did not suit up in the Clippers game, probably as the front office was scrambling to find a uniform befitting of his 7'2'' frame (heh, I'm sure there was paperwork to be hammered out), he has since received a hearty sum of minutes. The all-Jay Bilas Wingspan All-Star lineup of Ajinca (7'8.75"), Anthony Davis (7'5.5"), and Aminu (7'3.25") is complete. Watch out world!

In their first game back, both Davis and Evans appeared rusty. In particular, Evans had a difficult time finishing at the basket thanks to the presence of DeAndre Jordan, finishing 2-10 from the field. Despite the margain of loss, the Pelicans stuffed the stat sheet in large part due to a 32.1% offensive rebounding rate. Missing repeated layups might look good in a box score, but it does not look good on the game tape.

Throughout this game, Jordan stifled the Pelicans as did the verticality interpretation of the officials. Despite going 22-45 in the restricted area, the Pelicans only attempted 20 free throws. To compare, the Clippers attempted 26 shots in the restricted area and received 36 free throws. Part of this was officiating. Part was that the Clippers defensively attempted to stay vertical while the Pelicans went more frequently for the block. Below is the ugly shot chart of the first three games, losses by 9, 11, and 13 points respectively. 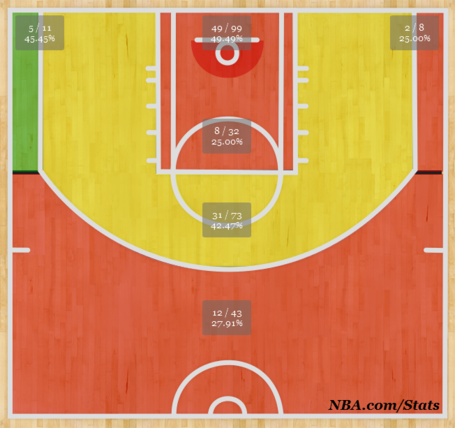 As of Christmas Eve, the Warriors, Clippers, and Nuggets are all good defenses; ranking 6th, 7th, and 12th in defensive efficiency. Remaining on the road-trip were the Blazers (23rd) and Kings (27th). I will mention here that the Pelicans are 26th in defensive efficiency and that makes them sound better than they actually have been this season, especially without Anthony Davis. Zach Lowe notes in his Western Conference Power Rankings that the Pelican big men struggle to execute Monty Williams aggressive PnR scheme (which I abhor regardless) and there really is no reasonable expectation that the defense will improve in the short term without schematic change. Then of course there are the inexplicable break downs which no scheme is going to help. 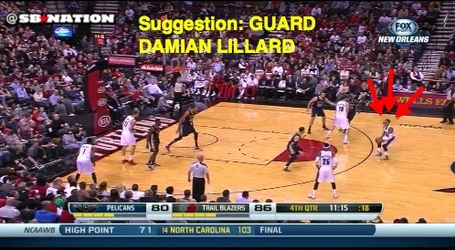 Against the Trail Blazers, the Pelicans roared out to a quick 18-7 lead and built a lead up to 49-36 with 4:05 to go in the second quarter. Then, the big run that New Orleans usually allows, started and it just kept going. Over the next 8:45, the Pelicans were whipped 33-10, which thankfully came to an end when Monty Williams called his FIRST TIME OUT IN THAT SPAN. Despite the enormous run, the Pels kept themselves in it and fought back to seize a two point lead with under two minutes remaining. Then this happened: 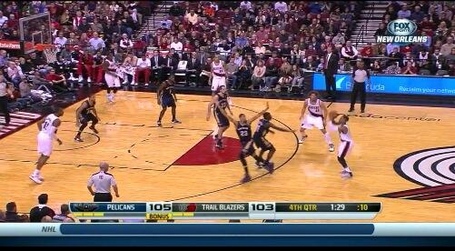 This shot (also pulled from Prada's Twitter stream), I think most sane people will agree, is ridiculous. Damian Lillard is a cold-blooded killer in the clutch. Tyreke missed a few shots close to the basket, the Blazers made a layup, and the game was over. The Pelicans did have a decent shot at sending it to overtime with two attempts from behind the arc: one from Ryan Anderson (a rather difficult step back attempt) and one from Evans (an open attempt from the wing) but neither hit their mark. The game was close despite a rather thorough defeat according to the box score (Portland controlled the game according to the Five Factors).

Our Game Recap was as positive as it could have been in a loss. Ajinca appeared to be an acceptable upgrade for a fourth big man. Tall and can catch a basketball consistently? Excellent!  Yes, this is what we have been reduced to in New Orleans. The shot chart looked better, except for the Pelicans all but ignoring the most efficient shot in the NBA right now. But what can you do? 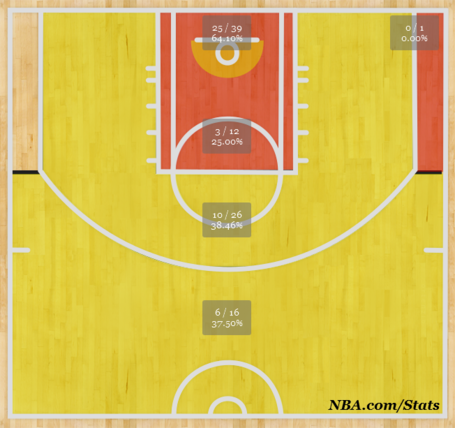 Enter Sacramento. After much improvement in the loss to Portland, the hope was the Pelicans could find a way to slow down DeMarcus Cousins and apply a thorough whoopin' to a much less competitive team. Instead, what Pelican fans were treated to, was the ugliest 36 minutes of basketball I've witnessed this season. The largest lead for either team was the seven points the Pelicans were ahead in the first three minutes. The third quarter was spent mostly at the foul line for both teams. Cousins had 16 points and 10 rebounds in the first half and Sacramento pulled in 40% of their misses.

Tom Ziller of Sactown Royalty broke down the fourth quarter here. The 18-5 run the Pelicans went on decided the game, as Tyreke Evans repeatedly abused Rudy Gay and New Orleans made their free throws. The Pelicans turned their final 15 possessions into 27 points, which is pretty good to end the game. Sacramento head coach Michael Malone (former Monty assistant) was less than pleasant in his post game assessment. As our Game Recap suggests, winning ugly is better than losing pretty. Maybe. The shot chart does look better in green than reds and yellows. 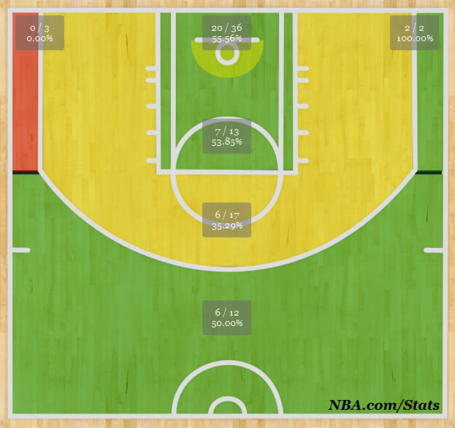 The schedule gets no easier going forward. The next game against a team firmly outside the playoff picture is not until January 20th against Memphis (and who knows, Marc Gasol might be back). The New Year starts with a four game road-trip spanning seven days, including visits to Eastern Conference powers Indiana and Miami. Times like these are why I (along with others) had hoped for the Pelicans would have jumped out to a good November against what appeared to be a weaker schedule. Unfortunately, Ryan Anderson was injured, the Suns were much better than expected, and Eric Gordon barely missed a wide open corner three to beat Golden State.

Shot selection is slowly moving away from the dumb zone, although not entirely. Much of that is due to the high number of layups being missed and then tapped repeatedly towards the basket. For the year, the team is attempting nearly 43% of their field goals in the dumb zone (interestingly, identical to the 43% the Hornets took last season). During our latest road trip that was closer to 39%; roughly in line with the 38% (572/1505) of shots the Pelicans have taken from the dumb zone since Anderson's return. In case you are wondering, the Pelicans attempted a ghastly 52.8% (401/759) of their shots from the dumb zone while he was injured. Yes, the Flamethrower, the Arsenal or Ryno, if you prefer, is the most important player on this team offensively. No, for the last time, you cannot have him other teams in the NBA.

Maybe the defense will get better, but I have serious doubts. Instead, leaning on the offense appears to be the best bet for wins in the short term. The next three games are against weaker defenses (12th, 17th, 23rd) before ramping up considerably (1st, 8th, 9th, 10th, 11th). Can the Pelicans make layups (shooting 55.8% in the restricted area, 27th in the league) or start finding their way to the foul line (26.9% FTr, 15th in the league) more often? If New Orleans can manage these things and keep the opponents off the offensive glass, they might slog their way back to .500. If not, this young team may find themselves far outside of the playoff picture before February even begins.