22 games into the season and we still don't know who the Pelicans are yet...

Share All sharing options for: Shooting for Success: Rounding the First Turn

Last year, Ryan Anderson missed one measly game as a New Orleans Hornet. Due to illness, he did not play on March 12th against Brooklyn. With the name change to the Pelicans, his luck evidently changed as he missed nine games to begin the season with a fractured toe. The Pelicans, eager to build on the momentum of a 7-1 preseason, struggled out of the gate with a paltry 3-6 record, which included allowing the Utah Jazz (the dirty nickname thieves that they are) their first win of the season. Was a promising season brought to a halt before it could begin?

Ryan Anderson = Good for Everyone

No, not all was lost. Since Anderson's return to the lineup, the Pelicans have gone 8-5, with two 1-possession losses to Dallas and Golden State. As nikkoewan summarized in his excellent article yesterday, Ryno has been nothing short of spectacular this season.

Additionally, both Jrue Holiday and Tyreke Evans have improved dramatically since the beginning of the season. I wrote this article focusing on Tyreke's struggles back on November 13th. At the time he was shooting a dreadful 47.06% (16/34) from the restricted area. In the games following, he has shot 56.6% (60/104). Yes, that's still slightly below his numbers from last year but much improved from the beginning of the season. 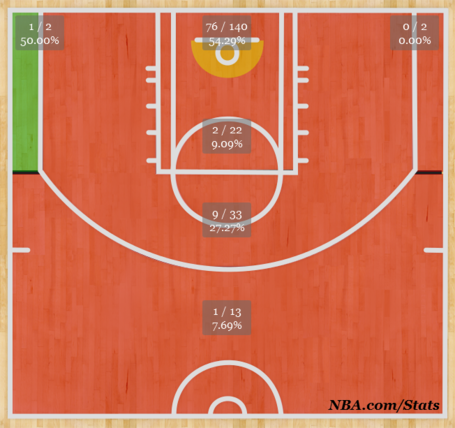 As I stated, the idea that a 23 year old elite basketball player suddenly forgot how to make layups is the epitome of knee jerk reactions. Instead a combination of being less than 100%, adjusting to a new role (Tyreke has been a starter throughout his career), and an extremely cramped court were to blame. As we can deduce from the numbers, such regression to the mean is occurring, as many expected.

As mentioned, Jrue Holiday has also improved remarkably with the addition of Ryan Anderson to the lineup.  The stats easily tell the story:

But Ryan Anderson's presence on the court is so much bigger than just a player or two. The entire team does better with Anderson on the floor and the shot selection is improving dramatically from the beginning of the season. Other writers throughout the NBA have pointed out the inefficiency of long two point attempts this week, highlighted by Tom Ziller's piece yesterday, with a fantastic graphic of where each team is performing from mid range. This morning, Zach Lowe of Grantland wrote about how the NBA is changing with a dramatic uptick in three point attempts from the Daryl Morey basketball factory of long distance chucking. What do you imagine occurred when the Pelicans added a 6'10" player nicknamed "Flamethrower"?

Yes, gaze upon the glory that is the Ryan Anderson effect. The team is attempting nine more field goals per game (83.9 before, 90.0 after). They are attempting more shots at the rim and converting more frequently. Their dumb zone shots (between the restricted area and the three point line) have decreased from 44.5 a game (53.0% of all attempts) to 34.0 a game (37.7% of all attempts). All of this movement, from less desirable shots to those more coveted, has a predictably positive effect on the team's performance on offense:

The one shocking outcome (when looking at Ryan Anderson's personally abysmal rebounding numbers) is that it has not mattered in the grand scheme of things. If anything, the team is actually gathering a larger percentage of total rebounds available, thanks to the dramatic increase in offensive rebounding. And this again can be attributed to Anderson, as the threat he poses brings a plus rebounding opponent (the opposition's power forward) away from the basket.

But Who are the Pelicans?

This season, we have a scant six games of evidence with the two most important players on the roster both healthy. Ryan Anderson, as thoroughly demonstrated above, is the most important player on offense. For instance, he creates space for Tyreke Evans to attack the basket and forces defenses to respect the three point shot creating an increase in offensive rebounding effectiveness.

Anthony Davis is easily accepted to be the most important Pelican overall (thanks to his limitless ceiling), but also right now, he is the most important piece defensively. Only Roy Hibbert defends the rim better than Anthony Davis (41.7% vs. 41.8% to be exact according to the SportVU cameras). Interestingly, since Davis' injury, the team is actually doing a better job on the whole of defending the basket (63.3% with Davis, 57.8% w/o Davis). Numbers can be misleading though -- playing the Bulls (without Rose), the Grizzlies (without Gasol), and the Knicks (uniformly terrible at basketball right now) were the likely culprit.

There is something to be said for the team simply getting better as the pieces work together. Also, keep in mind the team is operating in a host of sets that were unavailable without Ryan Anderson. Hopes of a defensive juggernaut were never entertained by anyone that I can remember, but the expectation that Monty Williams would turn this group into an average defense was common. While the Pelicans are not the worst defense in the league, they certainly remain on the precipice of such a ranking.

Instead, this team has evolved into an offensive nightmare, for both opponents and fans alike. While opponents dread what might happen if Ryan Anderson gets hot or if Tyreke Evans can continually bully his way to the hoop, fans anguish over D-League worthy lineups like Roberts-Rivers-Aminu-Amundson-Smith. Three minute or longer stretches without scoring, typically saved for the beginning of the fourth quarter to squander a lead or give the opponent breathing room, have become commonplace for the Pelicans. Even in victory, the Pelicans have lost double digit leads on three separate occasions.

Hopes not Dashed Yet

Fans should hope the two freak injuries to Anderson's toe and Davis' finger can remain just that, and the Finishing Five will be available for the remaining 50-60 games as a unit. Yes, in the past, the injury history of this roster's most important pieces was not a place to find much confidence in such a belief. However, Eric Gordon has shown no hiccups and Jrue Holiday has a strong reputation of being a rock. Now, there is some hope that Anthony Davis might return during the current road trip, as reported by Sean Kelley of the Pelicans radio broadcast before the Denver game:

Talked to @AntDavis23 this morning. He can't wait to get back. Sometime on the road trip not out of the question. Here it on broadcast 2nite

Many (including myself) have mentioned that this team, as constructed, is not winning a championship. Or likely even getting to the conference finals. At least, one of the Finishing Five is unlikely to be here in a season or two.

The hope, as fans, was that the team would improve and win 42 or more games, potentially challenging for a playoff spot. Of course, a broken toe and subsequent 3-6 start put a damper on those hopes. Shockingly enough, those hopes are not completely dashed...yet. The team could finish the season 31-29, and wind up at 42-40. That really is not expecting the team to suddenly start destroying the league. Just winning a couple games they are expected to lose. Making a few shots with the game in the balance.

Being a fan of a team is not all roses and glory. Imagine how frustrated Miami Heat fans are with their sudden lack of NBA titles. This team, even more so, was destined for struggles. People who predicted (like myself) that the team would win 10 games in November, also expected the team to lose both games of the back-to-back against the Knicks and Bulls. And we were wrong. Was I hoping for losses in the Garden or at the United Center so that my predictions could prove to be correct? Goodness no! I am, at my heart, still a FAN of this team.

Just two years removed from trading away the franchise, the Pelicans have legitimate hopes that this team is headed in the right direction. The team is .500 despite playing in the most difficult division in the league. The next franchise player has already been acquired. Teams who are forced to trade away such a player usually find themselves in a tough spot for a much longer time. Unless, of course, they have the good fortune of trading with James Dolan. Before you go all doom and gloom, remember this is a process. #TakeFlight is not always a flawless exercise.