I think it was about March of this year that, for the first time, I viewed my blind allegiance to the inevitability of Anthony Davis' stardom in any sort of questioning light. From the second we we won the lottery (and to be honest, well before that), I was, shall we say, smitten: 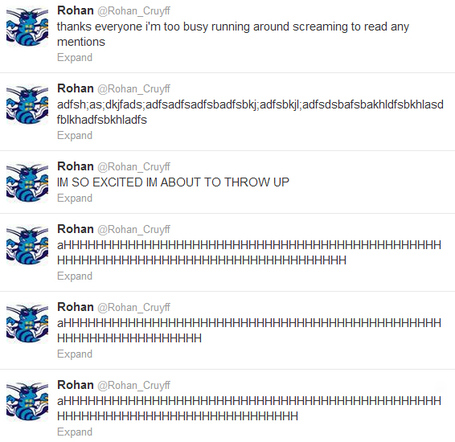 By March, Damian Lillard had raced into the Rookie of the Year lead, with "analysts" tripping over themselves to deem Davis pretty good but sort of underwhelming. That was clearly a pretty nonsensical opinion to hold about his offense; the most cursory of glances at his advanced stat line (21.7 PER, +7.1 offensive efficiency differential, 22% usage, 19 YEARS OLD) revealed his season to be miles more unique and distinguished than that of Lillard (16.4 PER, +2.1 offensive efficiency differential, 24% usage, 22 years old) who raced to victory on the back of health and counting stats. But his defense? His timing was off, his rotations were often late, and his floor awareness -- and I realize how ridiculous this was to expect in the first place -- didn't resemble his surreal abilities at Kentucky.

Still, I dismissed the question relatively quickly; I'd never seen a college player remotely like him before, and he was in the process of posting the first 20+ PER by a teenager in NBA history. Sooner or later, he was going to be Anthony Davis.

I've very rarely seen Pau Gasol -- one of the smartest offensive players of the last decade -- made to look downright foolish on a post up attempt. Again and again and again, with his defender making mad lunging swipes at the ball just because, and then recovering to swat ostensibly wide open layups? Ridiculous. And as Pau flailed away wildly under the rim, begging for phantom whistles, his tormentor repeatedly raced the length of the floor times to catch bullets in transition and finger roll at the rim in traffic. Pau was never close enough to see the wild, toothy grins on Davis' face on each instance, but that's probably for the best. Look to the baseline as a bigman in New Orleans' house of horrors, and it's Pierre the Pelican; look literally anywhere else on the floor, and it's a 6'10" flying monster ready to devour your soul.

I used to do this with Chris Paul -- recount the possessions of a close game down the stretch to highlight just how absurdly in control he could be during high leverage situations. I don't think I imagined doing it with Davis this quickly, but, well:

And ballgame. If you're keeping track, Anthony Davis used 5 offensive possessions down the stretch, scoring at least two points on every single one, drawing two fouls. He contributed heavily to 5 defensive stops -- 2 blocked shots with New Orleans acquiring possession on each, and a hand in 3 steals which were officially attributed to Jrue Holiday and Tyreke Evans. The sequence above occurred over a stretch of 11 possessions for each team; essentially, Anthony Davis scored or stopped a score on every other possession over the six minutes during which (not coincidentally) the game was decided.

Is Anthony Davis the best player to have entered the league since Chris Paul? Well..