Share All sharing options for: Shooting for Success: Early Returns

Your New Orleans Pelicans have played three games that matter, and are 1-2 as a result. These three games constitute a grand total of roughly 3.7% of the season, but are focused on much more tightly than many other three game groups will be throughout the season until playoff positioning (or potential altogether) are on the line. Being the first games in our current media climate creates this phenomenon. With that in mind, I will go ahead and dive in head first into this morass and attempt to get caught in the moment to the greatest degree possible.

Last spring I focused on the shot selection of the then-Hornets. The verdict was not good. I have included their shooting chart below, via nba.com/stats. 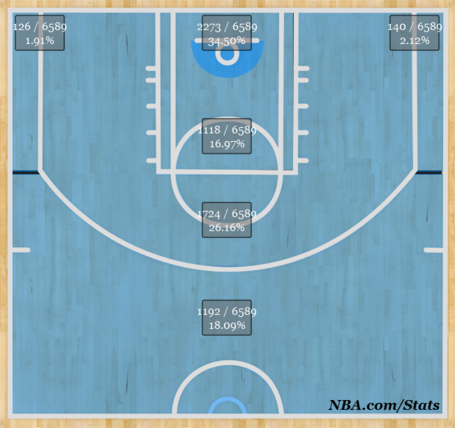 As I had discussed previously, the Hornets took a high number of mid range jump shots. The bane of Daryl Morey's existence. According to Hoopdata NBA teams shoot an average of 39.3% (13.3/33.8 per game) between 3 feet to the basket and 23 feet. Compare that to 64.6% at the rim and an eFG% of 53.8% from behind the arc and it is not difficult to understand why Morey's plan avoids the mid range game in building the Rockets. 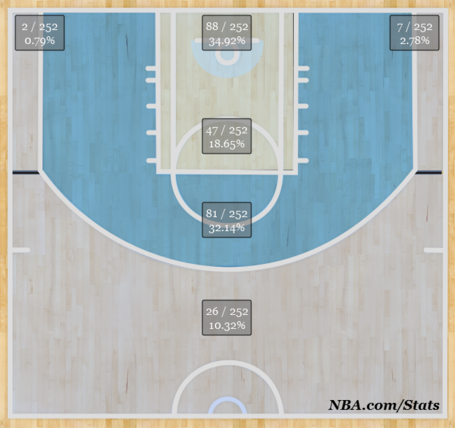 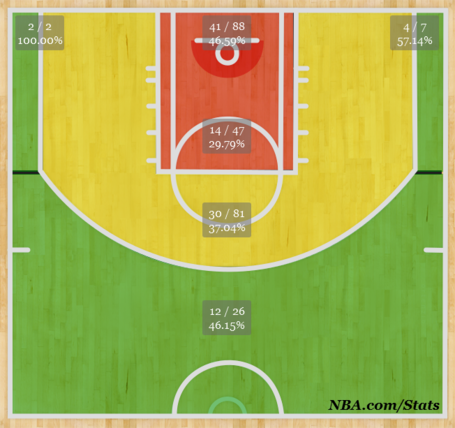 The biggest culprit in these ghastly figures is Jason Smith's ice cold start to the season. 23 of his 26 attempts (over a quarter of all team attempts) have come from mid range and he is shooting 39.1% (9/23) from that distance. Or, roughly league average, which gives you an idea of just how good he typically is from this area. Last season Smith shot 48% (98/204) from mid range. Jrue Holiday has accounted for another 20 mid range jump shots, converting 7 (35%). This is also below his average from last season, which was right at 40% (178/442). Anthony Davis has chipped in another 15 attempts from mid range, hitting 7. 58 of 81 mid range attempts, 71.6%, have come from the primary actors in the pick and roll centric offense run by Monty Williams.

There are a couple reasons for this to occur early on. The lack of Ryan Anderson cramps the floor. Indiana is celebrated for forcing long twos schematically. Lance Thomas on the floor in crunch time allowed Roy Hibbert to roam without penalty. The presence of Greg Stiemsma allows NBA players to play zone as shown in this screenshot (via @palochak from Bourbon Street Shots). Look at where the man covering Stiemsma (Kyle O'Quinn, #2) is standing!! 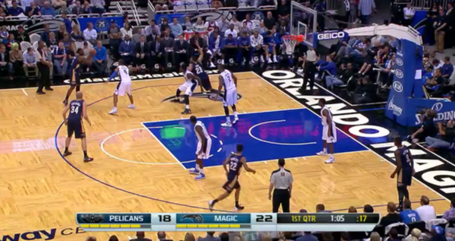 Put Ryan Anderson on the floor with that lineup (Holiday-Roberts-Morrow-Anderson-Davis) and the entire defense must change. The Pelicans have a number of deadly catch-and-shoot options in this young season. Eric Gordon is shooting 80% so far from deep on the catch-and-shoot. Anthony Morrow is shooting 75%. Jrue Holiday is shooting 50%. Using our averages from last season (large sample size!) anything equal to 43% from three is as valuable as a shot at the rim (64.6% at the rim is worth 1.292 points per attempt, or 43% from three).

Synergy Sports, like most statistical compilations, improves when more information is fed to it. In a season only 3.7% complete, the data is to be taken with a hearty amount of skepticism. Here is what we know from that data so far, with those caveats in mind. Jrue Holiday and Eric Gordon have participated in 115 plays which resulted in a FGA, FTs, or a turnover. 56 of those possessions have been Pick and Roll plays with them as the ball handler, resulting in a grand total of 32 points. Jason Smith and Anthony Davis have been the roll man on an additional 22 possessions, resulting in 24 points (thank you Anthony Davis for being amazing). So the Pelicans have run at least 78 pick and roll possessions and earned a total of 56 points, for a 71.8 ORtg. I should not have to tell you that those numbers are horrendous. Hopefully quite a few of those misses ended up as Anthony Davis tip ins.

This is not (again, see caveats!) to say that the Pelicans should not run the Pick and Roll or that it should not constitute a great portion of the offense. Hardly. But that a wider variety of pick and rolls need to be implemented (specifically I would like to see more side pick and roll, especially once Anderson is back as the screener) and more spacing might be necessary to get room to operate closer to the rim.

A number of sets the Pelicans run come from a "Horns" set, with two bigs (or a big and Tyreke Evans, noted here) beginning the play on the elbows. Further compounding the problem is that many sets begin with both wings on the block, set up in a box. The Pelicans ran a clever play to begin the Magic game out of this set, resulting in an easy Anthony Davis hook shot on the left block. But more often than not, this set results in a cramped court. Al-Farouq Aminu, eager to crash the offensive glass or make himself available as a dump off option, rarely gets the depth necessary in the corner. This allows defenders to play both him and defend the rim simultaneously. The complete absence of a corner three threat in the starting unit (Gordon and Holiday rarely venture below the break beyond the three point line; Davis, Aminu, and Smith are non-threats to begin with) opens up more conservative options for the defense.

There are reasons this may be the case early on. The sudden and unexpected absence of Ryan Anderson has undoubtedly closed off a good portion (or "the good portion" depending on your point of view) of Monty's playbook. The expected rotations have been thrown off kilter; players are playing minutes and rolls they had not anticipated or adequately prepared for. Holiday, Gordon, and Evans did not have much of a preseason together and will take time to mesh. Orlando's extreme sagging by their bigs in the pick and roll was complimented by Jason Smith missing an uncharacteristically high number of wide open jump shots.

The Pelicans have played two good games and one horrible game. They are 1-2 because one of those good games came against the Indiana Pacers. Despite the lack of space created by Ryno's absence the team is still getting into the lane at a high rate. While the team is currently converting at an extremely low rate around the rim that is greatly effected by one of those games being against Roy Hibbert and Ian Mahinmi. If the Pelicans shot their average from last season at the rim they would have scored an additional 18-20 points this season. Considering their current point differential is -4 that is not an insignificant sum.

The schedule, as noted here and here, is still relatively light in November. Finishing the month of November with 9 or more wins (9-6 or better) is not beyond the realm of possibility. Winning is notable for encouraging players to buy into the coach's system and method. If Jason Smith begins to knock down mid range jump shots in line with his career average the shot selection will change as defenses change their approach; taking away Smitty's 18 footer and opening up other options. Ryan Anderson's return will put a significant dent in Stiemsma, Thomas, and Onuaku's minutes, to go along with a smaller decrease from Smith as well.

Oh, one more thing. Anthony Davis. He is awesome. I finish every piece with something similar and it still rings true. Check this out. All the players to put up 25-8-6-6 in NBA history. It has only happened twice; Olajuwon and Anthony Davis. Except Hakeem was three years older and got a two overtimes to make it happen. Davis knew the Pelicans needed a win over Charlotte and he came out determined to make that happen. His effort defensively was infectious, leading to a team record in blocked shots. That is what superstars do. As far as 20 year old superstars, we really don't know. Anthony Davis is probably the first one.