Monty Williams's unique style choices are often mentioned by NBA insiders - he's obviously not Craig Sager, but he definitely is willing to push the fashion envelope. So we've decided to do a monthly series during the season that reviews Monty's sartorial taste, and this is the first installment. Even in a month dominated by the preseason, Monty Williams flashed his unique style on the Pelicans sideline.

This month saw Monty trot out mostly suits in conservative patterns, not some of his boldly patterned sport jackets matched with odd trousers that have raised eyebrows across the league in past seasons. To start reviewing Monty's October style choices, let's look at this ensemble from New Orleans's October 7th tie in Dallas: 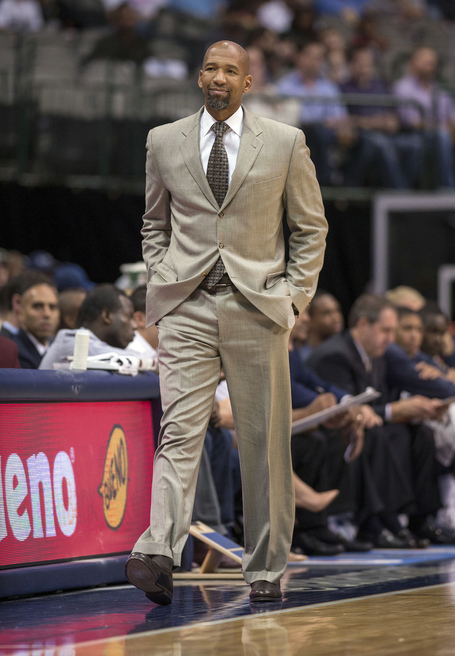 Willing to buck the fashion trend and wear tailored clothing that fits looser than current trends, Monty also firmly sides with the currently out of favor three-button jacket. In fact, he's so confident in his selection that I don't think I've ever seen him wear a two-button jacket before. It's a choice that serves him reasonably well, since it serves to moderate his lanky frame and draw the eye towards the face.

In the photo above, you'll note that Monty takes a casual approach to the suit, opting for a solid light gray with a subtle pattern, along with brown leather loafers (that appear to be Goodyear-welted) and large cuffs to complete the dressed-down look. The choice of a full break in the pants is sure to rankle those that would like him to be more fashion-forward, however. A couple of quibbles: I must say that his wide tie offers a strange contrast to his narrow lapels, and the choice of sock color to match his brown shoes instead of his gray trousers is a touch troubling.

For an October 13th semi-home game in sultry Biloxi, Monty opted for a more business-like approach: 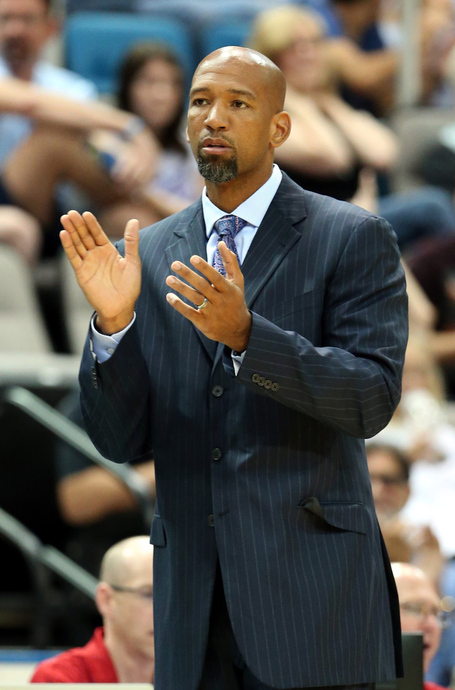 You'll note how the pinstripes add length to Monty's already imposing stature, and the suit, the pinstripes, the shirt, and the tie are all varying shades of blue. The choice of the light blue spread-collar shirt dresses down this business-ready ensemble, and the choice of a madder tie shows that Monty understands that this is the preseason, after all. Note the partially tucked-in pocket flap on his left waist - Monty's unaffected sprezzatura.

For the Pelicans' only home game of the preseason against the Miami Heat, Monty decided to go with something decidedly more austere: 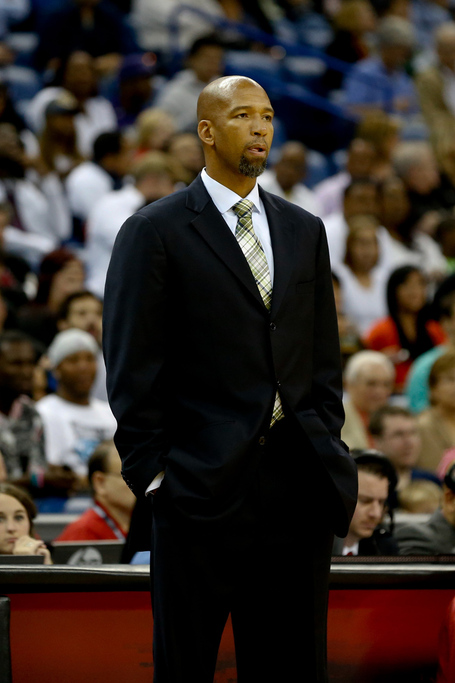 Here Williams opts for a more formal suit - plain navy (perhaps even midnight blue) with jetted pockets to create a slim, sleek look. He wears again the spread collar light blue shirt, which I think serves him better than the white semi-spread collar we saw in the first photo. The choice of a tartan tie (perhaps even wool!) really separates him from his coaching adversary that night, the more modern and sleek Eric Spoelstra. Spoelstra prefers solid (usually black) slim-to-skinny ties, so Monty's more traditional choice sets him apart nicely here.

Now let's review his selection for the October 9th game against Orlando in Jacksonville: 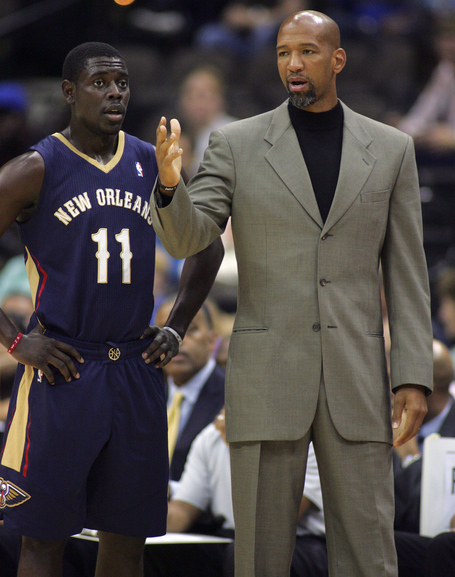 Monty Williams's outfit here is a bit of a dud, sadly. Let's start with the obvious - the use of the mock turtleneck with a suit was popular in the late 90's thanks to the casual look sweeping the country from Silicon Valley. Looking for a way to utilize their suit wardrobe without looking like a corporate tool, men replaced their standard button-up shirts with more casual alternatives like polo shirts and mock turtlenecks. It looked as bad then as it does here on Monty. To make it more casual, he could perhaps use a shirt with a button-down collar and leave the first few buttons at the top of the shirt undone. Secondly, the balance on the suit jacket is off - you can see how long it goes down his body, which just exaggerates Monty's abnormal length. You can see that his left arm, while hanging naturally, just barely reaches the end of the jacket - it would look more proportional if the jacket were to be just two inches shorter. Finally, the sleeves on the jacket hang a tad too long. A quick trip to the tailor and 20 bucks later, Monty would have sleeves that hit him in the appropriate spot - just covering the wrist bone.