What's Wrong with the Pelicans?

Attempting to diagnose and treat the Pelicans' ills

Share All sharing options for: What's Wrong with the Pelicans?

Why are you standing on the ledge? This is not college football or the NFL folks. Teams can (and will) lose games. Not only that, but absolutely absurd results (Miami has lost to Philadelphia and Boston already, teams expected to challenge for lottery balls, not playoff spots) are to be expected. You don't believe me? Last year on November 2nd the Pacers (49-32) lost to the Bobcats (21-61) and the Nuggets (57-25) lost to the Magic (20-62). On November 3rd the Hornets (without Anthony Davis or Eric Gordon) beat the Bulls IN Chicago. Don't you all remember the awful 3-6 start the Pacers had last year with losses to lottery teams such as Charlotte, Minnesota, and Toronto? Oh, yeah, probably not. But I thought I would remind you that the Pacers finished November 8-8 and their only win over an eventual playoff team was 79-77 over the Lakers. Maybe the Pacers, still adjusting to the lack of expected go-to bench scorer Danny Granger (injured in the pre-season), had a difficult time adjusting to their new rotation. There you go, back away and let's have a chat.

The Pelicans woes thus far are due to a couple factors. One, there are a lot of new players on this team. Not only are the players new to one another, but the most creative offensive piece (Ryan Anderson) was abruptly taken away from the team without any time to prepare for life without his talents. In addition, Tyreke Evans has struggled with ankle injuries. These two things have forced more of the bench offense to flow through Brian Roberts, with predictably disastrous results. Basketball is an improvisational art and the players need time in game situations together to become cohesive. Ryan Anderson not only creates space for the Pelicans to operate, but functions as a muse for Monty Williams on the bench. Check out this amazing piece by Drew Garrison for more Anderson-centric information. Below I have included a video from that piece.

Secondly, the lack of Ryan Anderson has created a logjam at the basket. Without Anderson pulling defenders from the basket the second unit, especially Tyreke Evans, has struggled immensely. Michael Pellissier examined the relationship between attempting three point shots and FG% in the restricted area here and I encourage everyone to check it out. Specifically to Tyreke Evans, he went from shooting over 60% in the restricted area last year to 47% this season. 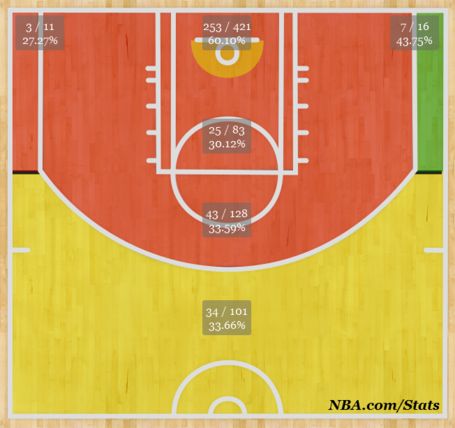 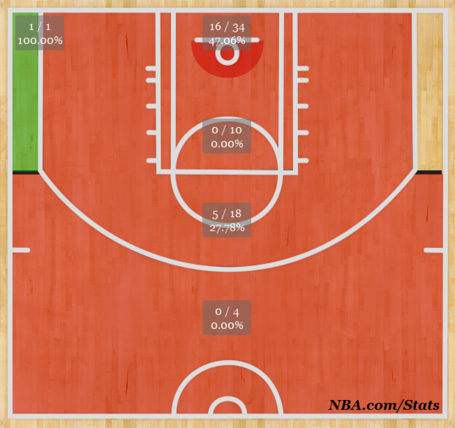 The lack of shooting threats (no Ryan Anderson) and movement (again, no Ryan Anderson being an offensive savant) makes playing defense against the Pelicans second unit a breeze. I will challenge those watching the game tonight to focus on not only the motion of the offense, but the location of the players. Corner three point attempts cannot be attempted if players are not already in position or a play is being deliberately run to create such shots. Watch how often Pelican players fail to even get into a position to score. Much is made about Tyreke's jump shot and that he "can't shoot". He shot 33.8% from deep last year, or equaling out to shooting 50% on mid range twos (which is better than Jason Smith shoots from 18 feet). The eye test be damned, teams should pursue the highest value shot in their offense. And yes, a Tyreke Evans three pointer is more valuable than a Jason Smith 18 footer.

Thirdly, and most importantly, the team is running an offense from a time before the three point line existed. The Pelicans attempt 30 shots a game from the restricted area or defined as corner three point attempts according to NBA.com/stats. Even adding in their above the break three point attempts brings the total to 39 a game. Those 39 attempts turn into 45.2 points per game. The remaining 45 field goals attempted (53.6%!) occur from the restricted area to the three point line. The "Dumb Zone". And 34 points result. It does not take a rocket scientist or an MBA from Stanford for me to tell you that 45.2 points on 39 shots is better than 34 points on 45 shots. But let me break it down. Every "Dumb Zone" shot the Pelicans take results in .4 less points (45.2/39 - 34/45) than one at the basket or behind the three point line. That is a STAGGERING number. For more information on efficient shots, check out this article by Tom Ziller.

This is the easiest part of the entire exercise. The problems we have diagnosed are lack of familiarity, lack of spacing, and shot selection. Time cures all of these ills! With time the team will gain familiarity with minutes together on the court. With time Ryan Anderson will no longer be injured. And with Ryan Anderson the court will be spaced out more ideally and three point shots will increase. Our treatment plan is literally, "take two and call me in the morning". The Pelicans are not suffering from a deadly communicable disease such as poor roster creation. They are suffering a common head cold. A 24-hour stomach bug. It is equal parts irritating and miserable but it will pass with time. I implore you to allow the entire roster to function for a couple games before we go writing pink slips and trading away players.

All is not doom and gloom today. There are some very positive signs found while treading through the morass of statistics. Jason Smith and Anthony Davis starting together has worked extremely well. The highlights are efficiency both directions (108.6 ORtg, 99.7 DRtg) and rebounding (77.4% DRB%, 27.4% ORB%). While on the floor together they allow a slightly worse than league average eFG% defensively (eFG% of 50.4%) but create more turnovers (16.5% TOV%). All of the above can be found at nbawowy.com.

As is tradition, I will end with the most glorious news of all. Anthony Davis is becoming a monster. Paul Flannery of SBNation dedicates the first portion of his Sunday Shootaround on Davis, which you can read here. Michael Pina has an incredible piece on Davis and his nearly limitless potential for The Classical here. One quote I must leave you with...

More immediately, there’s really no reason to argue against the possibility Davis becomes the undisputed World’s Best Basketball Player in four or five years. But look at these sentence constructions and the names in them—this is speculation, however fun it may be. What’s more relevant is the here and now, and the here and now for Anthony Davis is a beautiful thing.

To get you up to speed, here’s what Davis does well: Everything. Okay, just kidding.

Here’s what Davis does well, take two: box out, rebound, drive, set screens, roll to the hoop, read the defense, shoot, dribble, defend the pick-and-roll 25 feet from the basket with extreme flexibility, extinguish floaters at the rim, not turn the ball over, glide without the ball, post up, rebound, pass, finish, and rebound.

This is what it is like to have a "once in a generation" player on the roster. For those concerned about the expected toll Ryan Anderson might have on the defense, I say wrong. Anderson-Davis on-court statistics from last year are useless because this Anthony Davis is not even remotely related to that old Anthony Davis. The Unibrow has been baptized in Pierre the Pelican's blood and the results are terrifying.