For those of us trying to watch the Pelicans game this evening by less than fully legal means, this is what we found: 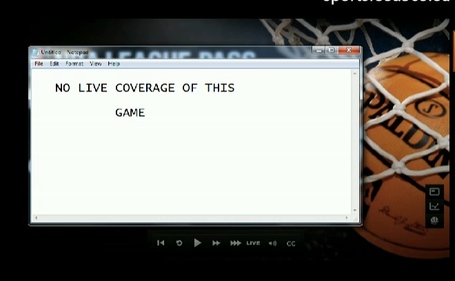 David, naturally, is pretty unhappy about this, and for good reason - if the Pelicans aren't on TV, how are they going to cultivate fans and convince folks that it's worth it to shell out the money to see a game in person? While obviously the situation is less than optimal, I think there are a couple of things to keep in mind.

1) The Pelicans now have almost all their games broadcast locally, a huge improvement from the CST games. Just a few years ago, moreover, people living on the Northshore couldn't even watch games, but now they're broadcast from East Texas to the Florida Panhandle. Having a few preseason games unavailable won't make or break a fanbase.

2) A lot of these preseason games that aren't watchable are taking place in odd locations, like Jacksonville or Biloxi, where teams are trying to expand their geographic footprint. As a result, they probably don't have TV setups ready to go, and it doesn't make financial sense for, say, FSNO to set up a full-blown TV setup in Biloxi for one preseason game. However, it makes a ton of sense for the Pelicans to try to cultivate a fanbase in Biloxi, where people can watch New Orleans basketball and occasionally go to games or spend money on merchandise.

With that nonsense out of the way, let's get to the game, keeping in mind that I'm doing this entirely off the boxscore and John Reid's liveblog of the game.

The Magic absolutely had no answer for Anthony Davis - he hung 29 on them on just 20 shots, making all 11 of his free throws. He was picking up fouls from a variety of players, from guards to forwards. He threw down several (I'm going to assume thunderous) dunks, and was making 18-foot jumpers in a manner that I can imagine would have appeared effortless. He added 9 rebounds (4 offensive) and 4 blocks to round off a spectacular night.

But the real story down the stretch was the Pelicans' free throw shooting. Owners of a 12-point lead with just over 3 minutes left in the game, New Orleans saw the Magic (mostly Nikola Vucevic) winnow the lead down to 2 with just seconds left, when Orlando began to foul. Over the course of around 30 seconds, Austin Rivers, Brian Roberts, and Anthony Morrow went a combined 8-8 from the foul line and kept the Pelicans out in front to stay.

The case for why the Pelicans will improve heading into this season was pretty simple - improved perimeter defense, a vastly improved Anthony Davis, and better three-point shooting. So far, all these things have come through. In this game, the Pelicans held the Magic to 6-18 from beyond the arc, and starting guards Arron Afflalo and Jameer Nelson went a combined 4-18 from field goal range. Anthony Davis had a spectacular game, and the Pelicans had another stellar three-point shooting performance, going 7-13 from 3.

Al-Farouq Aminu once again started hot and ended cold, making 2 of his first 3 attempts and then finishing 4 of 8 from the field. He nabbed 5 boards and had a couple of assists in a quietly effective game for him.

Greg Stiemsma was totally anonymous once more, logging 20 minutes, getting two points and nabbing two rebounds. What he's doing really isn't cutting it on the offensive side.

Jrue Holiday had a dreadful night from the field, going 4-14 for only 9 points, but he was dishing out assists left and right, nabbing 9 dimes in just 27 minutes of play. He had a couple of alley-oop lobs to Davis, too. I'm sure they must have been sublime.

Austin Rivers generated a classic Austin Rivers stat line tonight, going 2-8 for 7 points, with 4 assists and 2 turnovers. A bit of a disappointing day for Rivers, but his free throws down the stretch were huge - it's nice to see him hit those for once.

Ryan Anderson also had a bit of a rough go of it - he went 4-9 from downtown, but missed all three attempts inside the arc to make only 12 points on 12 attempts.

Brian Roberts had another superlative night. Sure, he's getting his playing time against the opponents' scrubs, but he's really excelling and producing a lot more on the offensive end than Austin Rivers is right now. His defense is really a liability, but he's making a good push for more playing time when the season starts. Roberts had 16 points on 9 shots, with 4 assists and 0 turnovers. You can't ask for more out of your bench spark plug.

Lance Thomas fouled out in under 16 minutes of play. I'm not even mad, that's amazing.

Jeff Withey finally got playing time after Lance Thomas fouled out (I'm not sure if I mentioned this, but LT picked up an astonishing 6 fouls while playing less than 16 minutes). Withey had a couple of offensive rebounds and two quick attempts at the basket right at the end of the game which spoiled the trillion.

The Pelicans have plenty of time to practice before their next game - it's on Sunday afternoon against the Hawks in Biloxi.