Pelicans Outpaced by Indiana in the Fourth

Share All sharing options for: Pelicans Outpaced by Indiana in the Fourth

The Pellies were really rolling for a good bit -- the majority of the first half and some spillover into the third -- before, in no particular order, the total lack of a serviceable center,  the absence of Ryan Anderson, weird rotation decisions from Monty Williams, and Roy Hibbert's infallibility in the eyes of god and/or the referees conspired to to make the first game in bird history an unpleasant one. It's a particularly anticlimactic outcome given the success of the preseason and all the shiny new toys the team acquired over the summer, but alas.

The game started innocuously enough, the only brow-raising moments coming when Jrue Holiday welcomed Pelicans fans to New Orleans arena on "behalf of himself and the Sixers" (who, at least for one night, did a fine job of replacing him) and when the team unveiled, well, this: 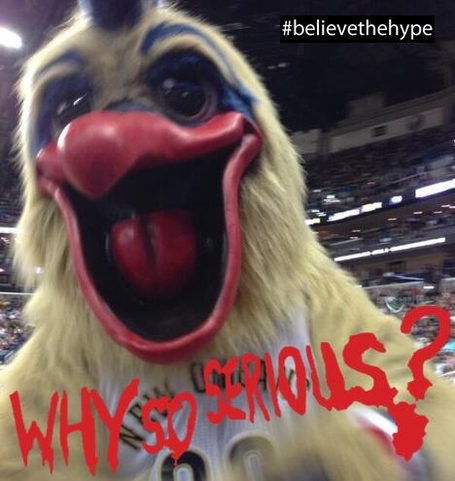 And so it was all fun and games with a dash of abject terror until the half, but even in the first two quarters, the cracks in the frontcourt gradually began to appear as Anthony Davis picked up a second foul in the first quarter and Jason Smith a third in the second. Greg Stiemsma, as expected, was the first big off the bench and outside of one clever poke-away for a turnover, was largely disastrous. His rotations were subpar, he didn't challenge drivers at the rim, and so it came as no surprise when Arinze Onuaku replaced him a quarter later. It's probably way too early to be screaming for Jeff Withey, but try and stop me.

The guard play was largely fine. Rivers' absence is somewhat interesting, though Brian Roberts is definitely the better offensive player and was used mostly in the off-ball capacity many of us clamored for last year. That left Tyreke Evans as the primary ball handler on the second unit, but after a first half full of adventurous forays to the rim, he settled for jumpers over and over in the second half. On the other side, Eric Gordon had a very nice evening, handcuffed by Paul George when that matchup was on, but otherwise in fine form.

I wouldn't get too down about this loss -- Indiana's going to be a very good team again, Ryan Anderson makes us so much different offensively and down the stretch, and something has to give at center soon. Some individual notes:

- Personally, I hope the thing that gives is Monty Williams committing to Anthony Davis full (fuller?) time at center. The muscle Davis added over the summer is obvious even in standard definition (hate you Time Warner), and tonight, he just looked like an at least 83% bigger, meaner, badder version of his rookie self. After Jason Smith fouled out at the end, Williams actually opted to play Davis at the 5, but instead of committing to it fully (by bumping Aminu to the 4), he unwisely left Evans on the bench for no great reason. It's one game in only, but based on the jumper, the drives, the way he absolutely shut down the significantly stronger David West, his unfair ability to trail and finish on fast breaks, and all the evidence of his rookie season, it's pretty safe to say that Anthony Davis is playing at an All-Star clip right now. Including the All-Star Paul George and the ref-aided Roy Hibbert, Davis was the best player on the floor tonight, and it wasn't even that great of a game.

- I liked Monty Williams' willingness to insert Anthony Morrow into a variety of lineups. Lance Stephenson did a great job tracking him and making sure he didn't get too many open looks, but Morrow's value in an Anderson-less lineup is particularly exacerbated. As a whole, the Pelicans only got off 11 looks at three all game long.

- Jrue Holiday had a solid debut -- 24 points, 7 rebounds, 5 assists, 2 turnovers, and a steal, and he had the screen to top of key jumper on lock. If the floor continues to be properly spaced and Anthony Davis continues to exist, Jrue will have that shot most every time down the floor. His creativity isn't nearly the same as that of the departed Greivis Vasquez, but this is a very different New Orleans offense now, one that doesn't require one guy to pick the locks of opposing defenses as much as sending waves of quick, strong guards to, around, and from the rim with or without the ball. That energy paid dividends in the first half before waning in the second, but Jrue was one of the few Pelicans that didn't flag at all.

- This Lance Thomas/Arinze Onuaku/Greg Stiemsma rotation -- seriously, they're going to have to do something about it.

- I wouldn't read too much into Austin Rivers' benching, mostly due to the crazy depth the Pelicans have in the backcourt right now. If Rivers was a 6'10" power forward type that happened to be as terrible at basketball as the real Rivers is? Yeah, then I'd probably worry a little.

Bottom line? It was a bad loss definitely, one that certainly won't help when the "playoff race" is upon us in March or whenever. But we were missing probably our second best player, and Monty Williams deserves a little more than one real game to figure out where all the new pieces fit. Lose to Orlando on Friday though, and I might be weaving you quite a different story altogether.

More from The Bird Writes: