Could the Pelicans be an Elite 3-point Shooting Team?

Share All sharing options for: Could the Pelicans be an Elite 3-point Shooting Team?

The last time New Orleans was a top-three three-point shooting team was the 2007-2008 season. Peja Stojakavic put together one of the greatest shooting seasons in history, shooting over 44% on more than 500 three-point attempts. Morris Peterson shot over 39% on almost 300 attempts, and a quickly-improving Chris Paul made 37% on his 250 three-point shots. The team as a whole shot 39% on just over 1600 attempts, powering them to a second-round playoff appearance.

Peja's decline meant that New Orleans never again had that kind of outside shooting prowess, but the Pelicans this year might be able to put together a comparable shooting season. New Orleans has both an elite outside shooter (Ryan Anderson) and a significant supporting cast that can all shoot close to 40% from downtown. Anthony Morrow, Jrue Holiday, Brian Roberts, and Eric Gordon can be expected to all take over 100 threes and should all shoot a very high percentage. I created a table of how the Pelicans shot distribution might pan out over the course of the year: 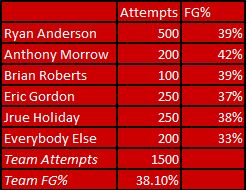 Ryan Anderson will be the leading shooter this year - he was second in the league last year in attempts, and should shoot at least 500 shots this year. I'm expecting that his total attempts will decline thanks to a stronger supporting cast, but that his field goal percentage will slightly rise.

Brian Roberts is quietly one of the team's best shooters last year, making almost 39% of over 150 attempts. He might shoot an even higher percentage this year, since he won't be forced to play as a starting point guard, though his reduced minutes might cut into his attempts.

Eric Gordon is the worst shooter of the bunch, clocking in at just over 36% for his career. He says he's worked hard on his three-point shooting over the off-season, and he's been pretty good in the preseason. Nonetheless, he's definitely the weakest of the Pelicans' 5 shooters.

Jrue Holiday had his worst shooting season last year as the lone scoring option on a terrible 76ers team, but his career average is still well north of 37%. On a better team, you can definitely expect that he should bounce back to a higher 3-point percentage.

The Everybody Else category will be a big question mark for the Pelicans. The only players that attempted a three pointer for New Orleans last year that are still on the team are Austin Rivers, Darius Miller, Al-Farouq Aminu, Anthony Davis, and Jason Smith. Of those, only Darius Miller shot over 33% (he shot an impressive 39.4%, actually). I anticipate that Tyreke and Austin will take the most three pointers outside of the big five this season, and neither has shot over 33% in their career.

I forecast the team to shoot around 1500 three-pointers, which is a shade more than the team shot last year. But with this shot distribution, the team should shoot around 38%, a figure that would have placed them in the top 3 teams last year in 3pt%. I think there is some upside to that figure as well, since all of these players will be playing on a team that has more offensive options on it than last year. Not only will the Pelicans have more scoring options line up around the three-point arc, but they'll also have players that will be able to drive and kick to them, like Evans, Gordon and Holiday. Davis will force defenders to crash down on him, even further opening up outside shots.

We saw a preview of this three-point shooting prowess in the preseason, when the Pelicans shot 44.8% as a team on 134 shots. They averaged 16.75 three points attempted per game, which over the course of the season would come out to just short of 1400 shots. I expect the Pelicans will take more threes per game in the regular season since their main shooters will be playing more minutes, but I doubt the 45% can be sustained throughout a whole season.