We'll begin a series of summaries of the off-seasons of various Pelicans. Many of the stories below actually happened.

April 17: The Hornets' final season ends in a rough loss on the road to the Mavericks.

May 21: Monty is the team's representative to the NBA Draft lottery, where the Pelicans get the 6th overall pick.

May 22: Monty marks Nerlens Noel off his to-watch list.

May 29: Williams starts to realize that this draft class actually kind of stinks.

June 10: Monty is announced as an Assistant Coach for USA Basketball, along with Tom Thibodeaux and Jim Boeheim.

June 13: Williams is now very sure that this draft class is pretty terrible.

June 25: Monty and Dell agree to trade the 6th overall pick and next year's first round pick to the 76ers for Jrue Holiday.

June 28: Monty wonders if that Noel guy was any good.

July 1: Monty and Dell present their pitch to Tyreke Evans, asking him to come to New Orleans to become the Pelicans' sixth man. It helps that Dell is carrying a suitcase filled with $11 million dollars.

July 14: Williams lands in Las Vegas to coach the USA Select Team and jokingly texts Anthony Davis, "You cannot escape me." It came off creepier than he intended.

July 24: Monty coaches the White team, with Ryan Anderson and Jrue Holiday, to a victory over the Blue team, led by Anthony Davis.

Late August: Monty Williams flies to South Africa to lead basketball camps. I'm actually not making this story up and you should totally read that linked article.

September 28: Monty learns that Eric Gordon is injured and/or out of shape and will have to miss the first few weeks of practice. I believe we have a photograph of his reaction via farm5.static.flickr.com: 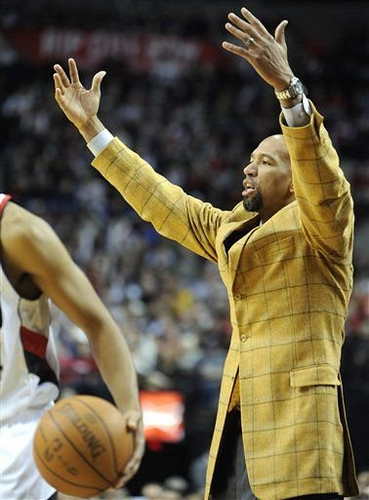