The Upward Trajectory of Al-Farouq Aminu

Share All sharing options for: The Upward Trajectory of Al-Farouq Aminu

A lot of the time, Al-Farouq Aminu's still a wild, flying, tangled scramble of legs and hands and arms, outwardly still the 20 year old rookie without a position. He drops passes that hit him in the hands, dribbles fast breaks away off his shoes, and fouls jump shooters occasionally. He's still the most enigmatic Hornet. (There's an almost alarming consistency to Robin Lopez's boom and bust performance).

But the haphazard nature of Aminu's game belies the surges of focus and direction that have grown ever more frequent. In many ways, the ambient noise that's simply inherent to his game has done a good job of masking steady growth across the board.

The early season questioning of whether New Orleans had erred in declining Aminu's summer option proved premature. But we're right on the cusp of justifiably re-exploring what the Hornets should do with him over the summer.

Where's he improved? Let us count the ways.

We'll start with some overall figures: 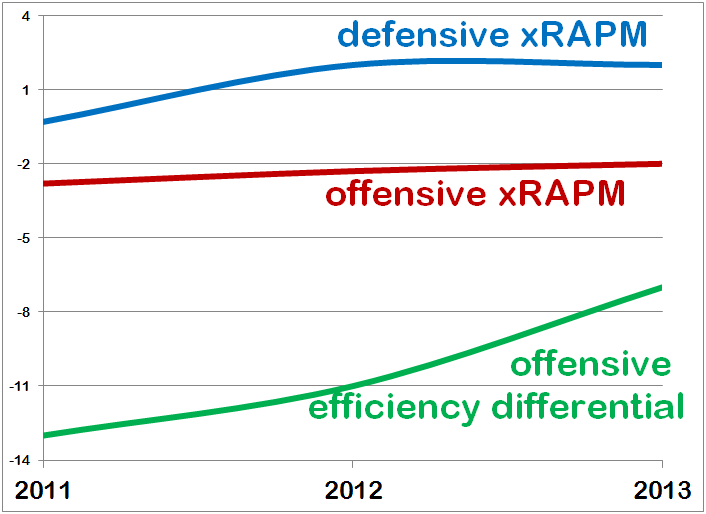 Offensive efficiency differential is ORtg differential from league average (105 points per 100 possessions this year). Aminu started very poorly at -13 with the Clippers as a rookie (obligatory "Austin Rivers is at -20" mention). But he's improved leaps and bounds since. While it might seem strange to praise a player that's still not that close to being a net zero offensively, keep in mind that given everything else Aminu brings to the floor, he doesn't have to be a plus offensive player to be valuable.

dRAPM and oRAPM -- regularized adjusted plus minus -- provide alternative ways of measuring overall impact. Aminu's +2 dRAPM figure is the best on the team, narrowly beating out Robin Lopez's +1.94. And while oRAPM agrees with offensive efficiency differential that Aminu has a ways to go to become a plus offensive player, it also seemingly indicates that he's been getting better.

A closer look at some defensive and assorted stats: 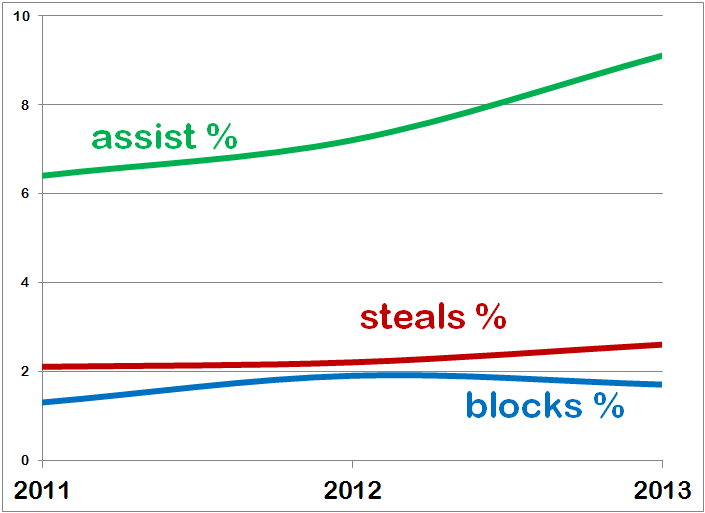 The blocks and steals rate are impressive for his position, but the increased assist percentage is perhaps most interesting.

Aminu's long range shot is still nonexistent (although his % from 10 to 15 feet has actually jumped to 47% this year from 28% last year, in a limited sample), and so this new found passing ability is very important. Because the Hornets can put out so many strong shooters on the floor (Anderson, Vasquez, Mason all converting very high percentages of their shots from range, in addition to Gordon's reputation), we've seen the ball swing around the perimeter frequently on offense. When it comes to Aminu, he's shown the ability to make the next pass, whether it's cross-court or more incisive.

Of course, Aminu's biggest contributions have come on the glass: 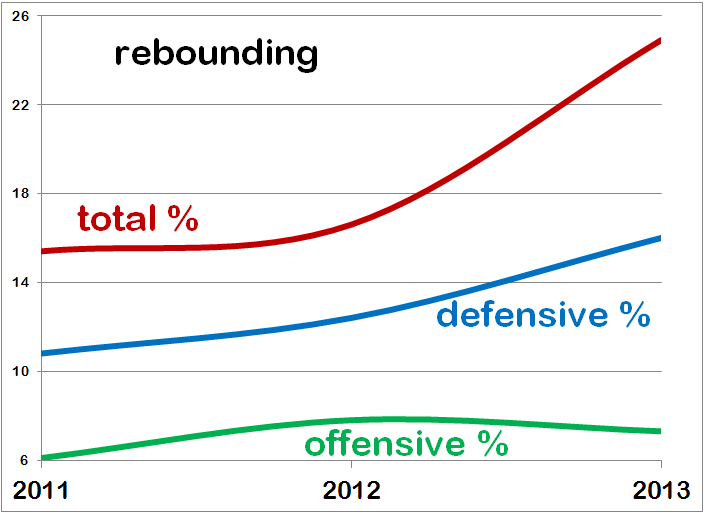 The average NBA big man (power forward or center) goes for a 10/20/15 offensive/defensive/total rebounding split. In 2013, Aminu's been outperforming the average big on the boards by a considerable margin, from the three spot.

I don't have the numbers off hand, but his aggressiveness on the glass has especially seemed to intensify post-benching.

The team's record, of course, has benefited tremendously.

There are no doubt brighter stars on the Hornets, better players, more promising prospects. But behind the Eric Gordon-Ryan Anderson-Anthony Davis core that will eventually determine the future, New Orleans has a prospect that's still just 22 years old, one that's quite literally improving by the game.

We've been wrong before, recently, with a very, very similar sort of player. Here comes Al-Farouq Aminu though, daring us to dream again.