Week in Review: The Return

The Hornets on a season high 3 game winning streak; here's how it happened.

Share All sharing options for: Week in Review: The Return

The Lord of the Rings trilogy tells the tale of two hobbits who would forever change the world -- Frodo Baggins and Samwise Gamgee. It depicted the long and grueling journey of two hobbits that knew nothing about the outside world besides beer, food and dancing. Through 7+ hours of running time (and maybe more with the uncut version), the story is centered around how those two hobbits went from the Shire to Mount Doom to destroy the One Ring.

But the movie made their returns quick and easy. In typical deux ex machina/Gandalf form, Gandalf summons huge eagles to help save Frodo and Samwise from the perils of a collapsing volcano (seriously, how did they survive that? and why did Gandalf wait that long to summon them?)

This is, however, consistent with most story telling -- focus on the journey forward, not the journey back. After the entire story has been told, we get a cut scene and then a happy ending. We don't know what happened in the middle.

How does this relate to the Hornets??

Eric Gordon started his journey back in the offseason when the whirlwind of craziness that was restricted free agency was followed by news that he had issues with his knees.

After a laborious journey back from, apparently, muscle atrophy, Eric Gordon is again the team's closer. And despite struggling from the field, Eric Gordon has made his mark, closing games against CHA, DAL and HOU with style. He got scores when we needed him most and despite not being in the best basketball shape, Gordon's explosive first step and confounding hesitation dribble is still in top form.

Once he gets his legs under him and has his rhythm going, Eric Gordon will make everybody remember why he was arguably the top young 2-guard in the league, ahead of lefty extraordinaire James Harden.

Anthony Davis' first handful games with the Hornets yielded fantastic results - his touch around the basket was soft, his jumper was smooth and his activity level (despite issues of awareness -- a skill he will learn with more playing time) was off the charts. This allowed him to post advanced numbers that rivaled the greats like Tim Duncan, Lebron James, and Chris Paul. He was posting a PER of 20+, an ORTG of 111+ and a WS/48 of .200+ -- all the marks of a legitimate star. Anthony Davis looked more polished as an offensive player than a defensive player.

Fast forward to today and what we've seen is a regression to the mean. His unbelievable start was met with the cold hard wall of fatigue. His shots around the basket aren't as fluid as it once was, his jump shots (though smooth) are flat footed and his activity level has gone way down. All of it is attributable to fatigue. Because of this, he has come back down to earth - he is posting "just" a 19.8 PER, an ORTG of 107 and WS/48 .125. (And it should be noted those are still excellent numbers). 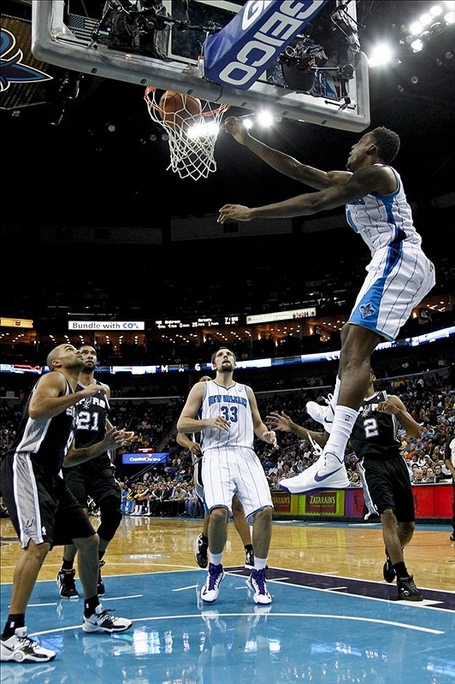 Aminu's journey parallels that of Anthony Davis -- a hot start was met with the harsh reality of "scouting". In a great start to the season, Aminu was unquestionably the team's best defender. He wreaked havoc on opponents' offense -- creating steals in the half court while still challenging shots. He also rebounded like crazy -- nearing the 10/20/15 mark normally associated with big men.

But he was late for practice, his energy waned, and his focus diminished. Monty -- in hindsight, maybe brilliantly -- decided that it was better to bench him and teach him a lesson -- play defense, run the break, rebound like crazy. A few DNP-CDs later and Aminu was inserted back in the lineup.

With Eric Gordon blurring the line between PG and SG (a 6'3" guard that prefers to shoot but is a skilled and willing passer, who has the foot speed to defend PGs and the length and body strength to defend SGs as well), the importance of AFA as a monster rebounder and versatile defender is accentuated.

In his 4 games out of the dog house (and returning into the rotation), Aminu has posted astronomic rebounding numbers, especially on the defensive end where he registered rebounding percentages of 6.6/30.4/18.3. Those were done in 33 minutes of play, which makes it more impressive. His defense still leaves a lot to be desired (he's allowed 22 points on 17 spot up situations in the last 4 games) and his offense has been bad (eFG of just 38.5%, TS% of just 44%, TOV% of 25.3%(!!)) but at least he's helped our rebounding margins.

Ryan Anderson lives the life of a shooter

Ryan Anderson started the season hot, scorching the league from downtown for a good 15 games after being inserted into the starting lineup. When the Brow returned, Anderson was pushed back to the bench and assigned once again to heavy scoring duties off the bench.

But that's the life a shooter lives.

Ryan Anderson has made the transition from bench scorer to a primary offensive option and again tobench scorer. And he should be lauded for it.

These are the Hornets' most intriguing return stories. Austin Rivers is still terrible. Brian Roberts is still in his funk. Henry is Henry. But of course, there's also been Lance Thomas' transition from "worst starter in the league" to "vital bench energy and hustle."