The moment the Chris Paul deal was completed, I was immediately struck by a rather unique aspect of 2012 draft coverage. The three most hyped prospects at the time (Anthony Davis, Michael Kidd-Gilchrist, and Andre Drummond) were being discussed for their defensive qualities far more than for their offensive ones.

The number of defense-first stars in this league can be counted on one hand, and that number drops even lower when one ventures into the annual All-NBA first team squads. In the six months since the Paul trade, the prognosis on those three prospects hasn't changed drastically, even if Drummond's stock has dropped due to shortcomings elsewhere. Davis will be the #1 pick for his defense, and Michael Kidd-Gilchrist may well be the #2 pick for his defense too.

Thomas Robinson, then, is more representative of the type of player I'd originally imagined as Chris Paul replacement. Robinson will likely go in the draft's top 5, and it will overwhelmingly be due to his offense and rebounding, not his defense.

Bio: Robinson was born in Washington, D.C. to a single mother. He attended the Brewster Academy in New Hampshire where he played his high school basketball. By the end of the 2007-2008 season, Robinson, 6'8" and 220 pounds at the time, had emerged as a top-50 player in the nation based on the recommendations of various scouting services.

At the start of his senior year, he committed to the University of Kansas. For his first two collegiate seasons, Robinson played primarily in a backup role, spelling the eventually NBA-bound Morris twins.

His backstory, much like that of Michael Kidd-Gilchrist, tugs at the heartstrings. During his sophomore season, Robinson lost both his maternal grandparents within the space of a month, and less than a week after his grandfather had passed, his mother died of a heart attack. Robinson was alone, left to take care of his 8-year old sister, in the middle of the most important season of basketball he'd ever played. This profile of Robinson from November is well worth the read.

The story from that point is, of course, more well-known. Robinson returned for his junior year, became a full-time starter for the first time, averaged 18 points and 12 rebounds a game, and led his team to the title game against Anthony Davis' Kentucky. Now, he's less than a month from fulfilling the spirit of this letter he wrote to his mother's memory a year ago:

Mom,
I guarantee you have no worries about Jayla.
I will make sure everything is okay. I won't blink.
My promise.

Stats: Thomas Robinson can do a number of impressive things on a basketball court, but his most obvious skill is rebounding. In 2012, he ranked 2nd in the NCAA in pace-adjusted rebounds per 40 minutes, and the way he attacks the rim on both ends is remarkable; he can very often pull down tough rebounds without having established position (though he does that quite often too).

Robinson's post-game isn't the most advanced, but he does connect on rolling hook shots with both hands and can take his man one-on-one provided he catches deep enough. Through his three years at Kansas, his shooting has improved (as shown by FT% progression from 40% to 51% to 68%), but as Draft Express notes, he's not yet a threat in the midrange. He's not a great passer out of the post either. Even with massively increased defensive attention on him this season, his assist rates barely improved while his turnover rates remained mediocre.

Putting it all together, Robinson posted a 27.3 PER - a solid figure, but not one to get overly excited about at the collegiate level. For reference, Anthony Davis topped 35 this season, while a close Robinson comparable, Ohio State's Jared Sullinger, grazed 30.

The more significant issues come into play on the defensive side of the ball. Robinson averaged, pace-adjusted, an alarmingly low 1.1 blocks per 40 minutes, four times fewer than UNC's John Henson and five times fewer than Kentucky's Anthony Davis.

Skills: Robinson moves powerfully and menacingly; this stands out about him more than anything else. There's a strong Blake Griffin-like quality to the directness of his motion on the ground, if not aerially, and Robinson will often be the first player sprawled across the ground for a loose ball. This, in conjunction with his rebounding ability, is what makes Robinson one of the safer picks in the draft. Even in the worst case scenario, this is a player that already possesses elite NBA-level instincts in terms of gaining possession of the ball.

Size will almost unquestionably be an issue as we get closer to the draft. He's listed at 6'10" or 6'9" in most places, but as this picture might just show, he appears to be shorter than UNC's Harrison Barnes (right), who's listed at 6'8" almost universally. 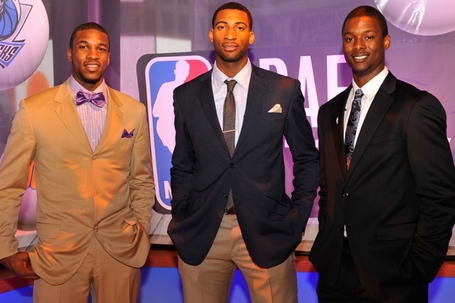 Personally, I'm not overly concerned with his height. Plenty of shorter post players have made it work in the past, Robinson will certainly be a capable rebounder even amongst taller players (rebounding is perhaps the most directly translatable statistic from college to the pros), and if Robinson can continue to develop his jumper, his offensive game should be varied enough for it not to be a huge issue.

Defensive questions though, are entirely legitimate. The startlingly low block rate brings into question Robinson's suitability in any sort of weak-side help emphasis defensive scheme, and though he probably has the requisite core strength to contend with stronger players individually, the ability to cover space and challenge the shots of non-primary defensive assignments has becoming increasingly required of good defensive bigs in the modern NBA.

Overall: There's almost no question that Robinson belongs somewhere in the top-5, but concerns about using a 2nd or 3rd pick on a strong rebounding, poor defending, middling scoring big are very reasonable. Robinson also doesn't have age on his side the way Kidd-Gilchrist or Andre Drummond do. Nonetheless, this is an extremely hard worker with at least one - if not more - legitimately NBA-level skill, and in a draft positively littered with question marks elsewhere, there's surely a lot of value in that.