Share All sharing options for: Hornets Excited to Play With Anthony Davis, Analyzing Davis' Unibrow, and Other Monday Stories

Monday! It is Monday. And here are some links.

- As you might imagine, various Hornets - including Eric Gordon, Greivis Vasquez, and Jarrett Jack - are excited about potentially teaming up with Anthony Davis.

- Over the weekend, the Hornets held a select-a-seat event for season ticket holders. Big day, as it appears the #twittersection has relocated.

- Former Hornets GM is a finalist for the Portland GM position. Portland, picking at both the 6th and 11th spots in this draft, could well be one of the Hornets' competitors for a point guard as the draft approaches.

- Benjamin Hochman interviews a New Orleans-based aesthetician for the Denver Post on the subject of Anthony Davis' unibrow. If you missed it, here's Davis' own thoughts on it.

- And finally, SLAM magazine has apparently photoshopped Davis in a #1 Hornets jersey onto their newest magazine issue. Either that, or Davis actually did a photoshoot in a jersey with a magically levitating left shoulder. 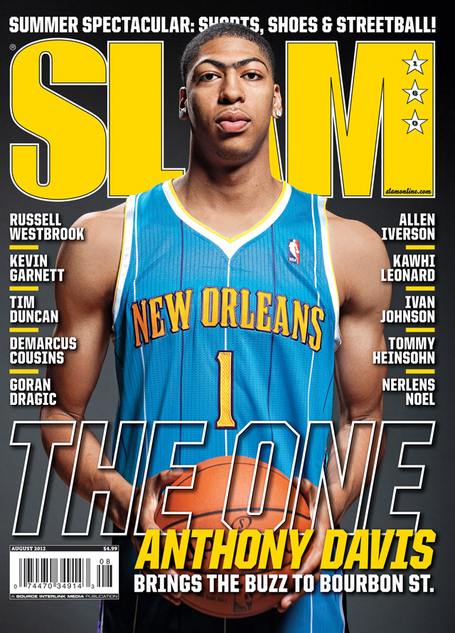