Share All sharing options for: Pistons 89, Hornets 87: More Malice in the Palace

Rasheed Wallace's timeless "both teams played hard" was especially appropriate tonight. With Jarrett Jack already sidelined by an injury, Brandon Knight broke his nose, Carl Landry injured his left leg and did not return, and Jason Smith probably, probably suffered some sort of concussion-like symptoms. But through it all, New Orleans was able to pull out the loss at the end, against a team that will represent some of their primary competition in the draft lottery this June. Detroit now pulls two games clear of the Hornets, with the current "leaderboard" looking thusly: 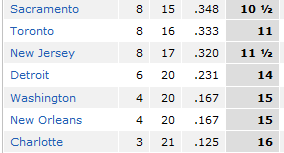 Not too shabby at all. With Eric Gordon projected to return by at least some point in March, every loss the Hornets collect at this stage is important. With enough luck, they'll have piled up an insurmountable lead on Sacramento, Toronto, Detroit, and the rapidly improving New Jersey. Washington and Charlotte though will be there till the bitter end.

The game itself wasn't particularly noteworthy. Lots of mistakes, as we've become accustomed to (an 18% turnover rate for the Hornets). Lots of missed shots, as we've also become accustomed to (and that includes the shocking and rare sight of a multiple converted threes from Trevor Ariza). Greg Monroe was clearly the best player on the floor for either team, and while Ariza randomly matched him despite taking 8 of his 12 shots from 17 feet or further, the game wasn't as close as the final score line indicates. Detroit simply out-executed New Orleans in the last few minutes, and the result wasn't in question for at least the last 60 seconds.

As for the players themselves - Greivis Vasquez had another reasonably creative game. The turnovers (holy jump passing batman!) were up, but again, it's harsh to hold that against him. Al Aminu had, by the box score, a very solid game with 14 points on 9 shots and only (!) three turnovers. For the most part, he seemed just as out of control as normal, so I'm going to have to go back and watch the footage on him tomorrow. And the puzzling lack of minutes for the highly productive Gustavo Ayon continue. With Chris Kaman ostensibly back in the fold, this is not a very good sign at all. It's too early to draw parallels between Ayon and the Marcus Thornton situation, but for a team with very minimal talent and a ridiculously bleak outlook in the short term, Gustavo Ayon playing fewer minutes than any other active player (and Xavier Henry drawing a DNP) is just not acceptable.