Share All sharing options for: Trevor Ariza: A GAMECHANGER

Recap in the morning. For now? It's a SBN sponsored post!

SBNBA blogs have written on their team's respective "Game Changers" today, ranging from Josh Harrellson to Spencer Hawes. (Go buy a PlayStation!). The Hornets' game changer (in a positive sense) this year has probably been Gustavo Ayon, but it feels apt to write about Trevor Ariza today. As RedHopeful has pointed out in the comments, Ariza's had the best month of his Hornets career. In many ways, this was the player New Orleans was trading for in the Darren Collison deal, the player they never actually got.

That lost player, more specifically, was a slasher, one that thrived in a Lakers' system that gave him open, easy looks through the ability of Kobe Bryant and Pau Gasol. When Ariza eventually moved to the Rockets, his responsibilities were immediately far more expansive. For really the first time in his career, Ariza was asked to create consistently off the dribble both for himself and for others.

And it's puzzling to me that Daryl Morey ever saw this as a viable option because the first thing you noticed about Ariza, beyond his explosive athletic ability and passing lane defense, was that he could never really dribble. It was true in New York, it was true in Orlando, and it was true even through all his success in Los Angeles. The result really should have been predictable- the inability to break down the first man individually was always going to yield a skyrocketed rate of longer jumpers (especially relative to a player that had had so many opportunities created for him as he moved to the rim).

Ariza's assisted-on percentages suffered in Houston, especially relative to his 75% rate in 2008 with the Lakers; in his first year with the Rockets, 59% were assisted. While that figure did improve the next season, his over-reliance on his (very poor) jump shot did not. And when he came to New Orleans, Monty Williams used him as much in a creative role as in a receiving one, alongside Chris Paul. It confounded us to no end, of course. That story's been told quite often; there's a legitimate case that Ariza posted one of the five to ten worst offensive seasons in the history of the modern era of basketball in 2011-2012.

What's changed now? Firstly, the reliance on isolation has been reduced by about 4%, per Synergy Sports data. More importantly, spot-ups have been drastically reduced as well. Last year, spot-up jump shots accounted for 36% of Ariza's offensive possessions, a play type that naturally fed into his worst instincts. Almost exclusively, the spot up resulted in Ariza moving away from the hoop, in position to take a long jumper. Monty Williams and the coaching staff were, in a way, egging Ariza's worst tendency on instead of combating it. But this year, that number is down to 26%. The long spot-ups for threes are especially lacking. In their stead, the combination of hand-offs and cut plays (which generally lead to more forward, attacking play, relative to spot-ups) has jumped from 8% a season ago to 12% now. They sound like small things for sure, but fixing tendency as opposed to ability was the issue all along. And we're seeing some very positive signs.

We can measure Ariza's offensive performance through John Hollinger's "Game Score" as well. Think of it as a game-to-game version of PER, where 15 is average, 20ish is great, and 25ish is solid All-Star. Here's a chart of Ariza's game-to-game Game Scores last year contrasted with his start in 2012. The graph is a moving average of 10 games of Game Score data, so each plot "point" represents a 10 game sample essentially. 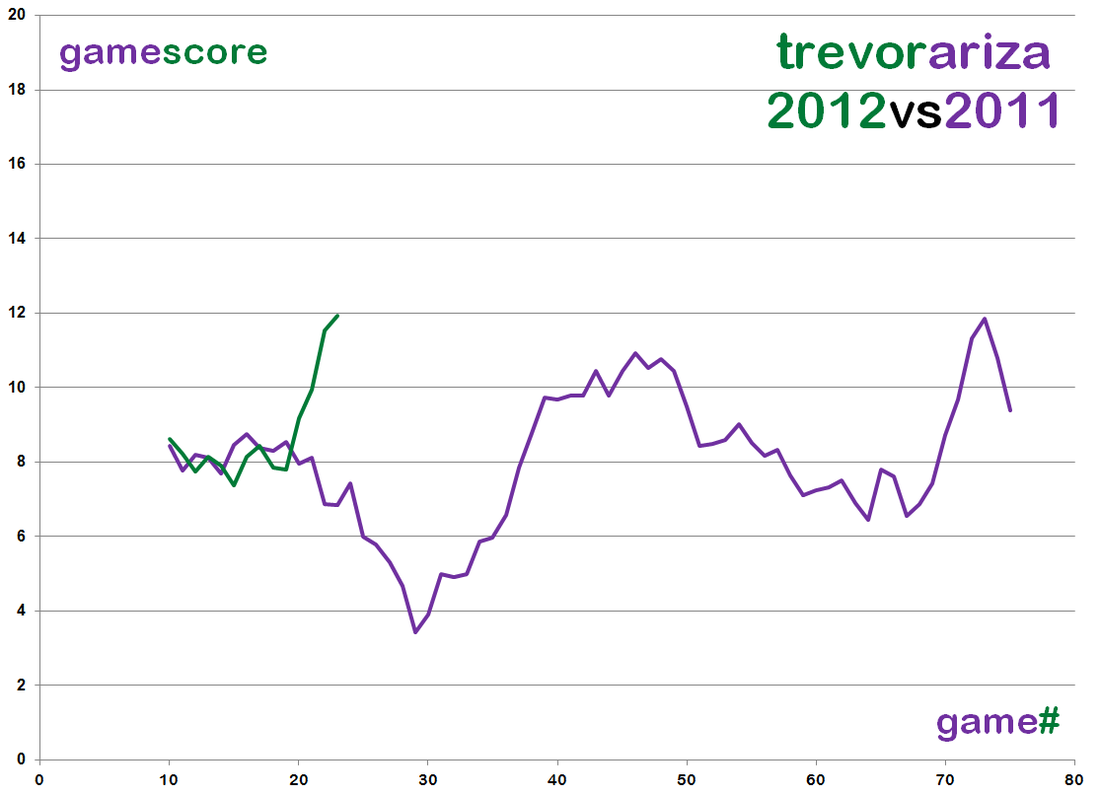 You can see there's a solid statistical case that this has been the best stretch of Ariza's time in New Orleans. Keep in mind the chart doesn't even include last night's game, one of his best performances on the year. His finish to March in 2010-2011 is the only real competition.

It's important, of course, to note we had a bit of a false alarm with Ariza to start the year. Through the first ten or so games, he looked far more aggressive than we'd ever seen him, and it's an open question as to how much of his current hot long 2% and 3% (9 of his last 19) is actually sustainable (my guess: very little). But the point is that there's now some (small sample sized) evidence that his improvement has moved beyond simply making shots he normally misses; the alterations in play calling and Ariza's noticeably altered role in the offense are legitimate steps forward.

Where do we go from here? It's unclear, especially with the draft ahead. But the Hornets do have Ariza on the books for two years and $15M after this season. His defense, as we've talked about before, is a huge, huge part of the +6 paradigm. Ariza is just 26 right now and has stayed relatively healthy throughout his career. It seemed an absurd notion as recently as a month ago, but is there a nontrivial chance that Trevor Ariza is a valuable piece of the next Hornets contender? It's looking more and more plausible. And that, friends, is a GAME CHANGER.*