Share All sharing options for: Hornets not Lintimidated; Ayonsanity commences

The Hornets snapped the Knicks' 8 game win streak, extending their own to three. Multiple story lines develop in this game, some highlights: Jeremy "Linsanity" Lin turns the ball over, Trevor Ariza plays amazing basketball, and Gustavo Ayon begins his own personal winning streak, which some have already begun to herald as "Ayonsanity". All this and more, after the jump. 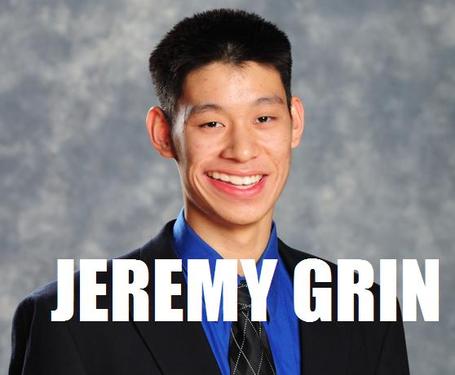 Much unlike the above image, Jeremy was not grinning to begin this game. He opened the game with 6 turnovers in the first 10 linutes of play, in addition to a few missed shots. Chris Kaman had a strong first quarter with 10 points, off those jumpers that defenses never seem to take seriously. But then the Knicks started to speed the pace up in the second quarter, leading the Hornets second unit to follow suit, letting the Knicks cut it down to just 4 at halftime. Playing at a fast pace + Hornets 2nd Unit = Turnovers. Some Kaman and Aminu miscommunications and balls going out of bounds.

The Hornets slowed it down again in the third, and their lead began to build up peaking at 13. Trevor Ariza hit a a couple of threes, stole passes, cut to the hoop, and made his layups, leaving many wondering where this version of Ariza was with Chris Paul around. Vasquez hit Gustavo on a couple of really nice cuts, and really nice finishes. The Hornets looked in control.

At this point, Linsanity hits a three, drives and hits Amare for a couple of dunks, just getting the MSG crowd completely worked up. They go crazy at any kind of positive play from Lin, even if it's just one crossover that goes nowhere. The crowd was just waiting to cheer, and the Knicks played with a lot of momentum, cutting the lead down to 4 with Lin on the bench.

Lin comes back in and hits 2 free throws, putting the Hornets lead at just 2 with a minute left. It is here that (in the distant future) many will point to as the turning point for the legend of Ayonsanity: Gustavo Ayon answers Linsanity with 2 points of his own. On the next possession, Linsanity gets past Vasquez with a crossover, ready to make more history in this Knicks comeback. Only who does he meet? Ayonsanity. Ayonsanity provides some amazing defense on Lin's layup, giving the Hornets the win.

Not particularly relevant, CST's Gil had a field day with Lin's name today. Like Bob said on broadcast, he's been waiting for this day for 23 years. Great fun was had with Jeremy Lin's name all around. Something to think about: Will we still abuse his name for puns in a year or so? Or will we just get too sick of it?

Beli and Ariza had great shooting nights, and Vasquez and Kaman were able to hit their jumpers. Hornets shot surprisingly well from beyond the arc. Much better than usual. Ariza played spectacular defense as well, with a couple of very exciting blocks.

This season as a whole is a sad, confusing one. The Hornets are playing without 4 starters and a couple of bench players. Even if the team is tanking for picks, it feels nice to win three in a row, especially nice to end the entire Linsanity streak. We can only hope Ayonsanity indeed catches on, and everyone with a computer in Mexico votes him into the All-Star game next year.