The Thunder Blow Out the Hornets

Share All sharing options for: The Thunder Blow Out the Hornets

The Hornets were blown out by the Thunder, dismantled in every facet of the game from the opening tip.

Via ESPN, here's the game flow (OKC orange and NOH teal) charting how it got out of hand. 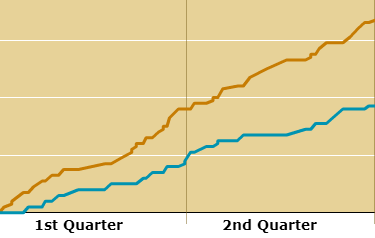 The Thunder destroyed the Hornets from beyond the three point line, moving the ball excellently until the Hornets' lackluster defense dissolved. Kevin Martin and Thabo Sefolosha were hot from deep, sure, but they were consistently wide open. Offensively, any forays inside the arc were cause for celebration; no Hornet was able to break down a defender with regularity. That's obviously a season-long concern and one that likely won't be remedied until Eric Gordon's return.

In many ways, this game wasn't particularly different from the others New Orleans has played this year. They struggled along on offense as they have in both games they've won and lost and even managed to score 30 in a quarter. Their defense was similar too -- decent rotations and resistance in the paint while allowing plenty of open perimeter space and attempts. OKC took advantage of that space in a way few others did so far.

It's worth noting: we saw a side of Kevin Durant tonight that I personally had never seen before. Durant spent much of the second and third quarters of this game laughing at and taunting various Hornets players. After a missed Vasquez free throw in the third, Durant could be seen laughing in his face, proclaiming he "got the next one." After a made three to put OKC up 30, he held a hand up in the air, struck a pose, and mugged his way back to the other end. Monty Williams was apparently among those unimpressed with Durant's actions, walking over to him at halftime, jabbing a finger in his face, and letting him know what he thought. Durant seemed genuinely taken aback at the time but was back at it in the second half.

At the end of the day though, Durant can do whatever he damn well wants. He's one of the best basketball players in the world, and he and his team absolutely torched the opposition. The Hornets got smacked in the mouth, and they just weren't good enough to respond. That's the bottom line on this one.