So said notoriousBEE in the game thread, and it was that kind of game.

Forget about the result for a second. In terms of how the Hornets looked on the floor, things went just about perfectly. The team competed on both ends, got fantastic point guard play, and saw contributions from across the roster. And, oh yes, Anthony Davis looks incredibly, exceptionally, fantastically good at basketball.

These were the first two shots of Davis' NBA career:

Both were confident, high-arcing, unblockable shots, and both continued a trend we spotted early in preseason: Anthony Davis looks further along offensively than defensively. This is a bit weird obviously, given (a) the defense he anchored in college and his blocking prowess and (b) the types of easy, assisted field goals that fueled his great offensive numbers.

So far, Davis has shown off the midrange jumper, the flip hook shot from the block, and the ability to finish remarkably difficult, almost Wade-esque contorting layups in traffic. He's not particularly close to being a go-to scorer or a secondary option, but he's already a guy that defenses will have to game-plan for. Should we be surprised by that? I am a little bit.

Small forward and point guard would be our two biggest issues, we figured. Nope. Not tonight at least.

Greivis Vasquez inexplicably outplayed Tony Parker in the first half, repeatedly knifing into the lane and finding shooters and cutters with remarkable ease. His preseason had raised so many questions, and one night probably doesn't answer all of them.

His passing vision has grown rapidly since last season though. In games where his execution matches the inventiveness of thought, the results are excellent. 8 points on 8 shots, 6 rebounds, 2 turnovers, and 13 assists is not going to be a problem this year in the slightest.

And then there was Aminu. I said after the Miami game that I'm not sure I fully buy the "new" Aminu yet. Goodness he had an outstanding game again though. If we're including both sides of the floor, Aminu had a strong case as the Hornets' best player.

He's the best defensive rotator on this team by far. Nobody's reading cutters and the weak side of the floor like Aminu right now; nobody's close. That play where he came from out of nowhere to block Tim Duncan point-blank at the rim with no help and no leverage whatsoever? Man.

Okay, so a new thing for recaps this year. As many of you know, I'm a huge fan of Dean Oliver's work, particularly his "four factors" way of looking at basketball. Specifically, the vast, vast majority of NBA games can be explained by (in order of importance) 1. shooting, 2. turnovers, 3. rebounding, 4. fouls.

Oliver suggested shooting should be measured through "effective field goal percentage", turnovers through "turnover rate", rebounding through rebounding rates, and fouls through free throw rates. For an explanation on those stats themselves, click through here.

In my recaps this year, I'll try and include a box that contains the above stats for the game. Like such as: 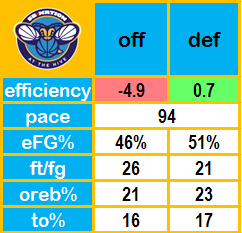 I've split it up into offensive and defensive columns. Red is bad, green is good. Efficiency is either the offensive or defensive efficiency differential (the difference in points scored/100 possessions or points allowed/100 possessions from league average). Pace is total possessions in the game. And the other four are the ones described in this article.

Tonight, the Hornets were basically done in by San Antonio's second half shooting despite playing evenly most everywhere else. Despite the bright spots across the roster, the Hornets' offense was ultimately below average. The two biggest culprits were Ryan Anderson and his 3 for 10 (1 of 5 threes) shooting night and Austin Rivers' horrendous 1 for 9 NBA debut.

It's really, really tough to analyze the defense properly at this stage.

On the one hand, the perimeter defense was downright abysmal at many points. Tony Parker repeatedly burned Greivis Vasquez in the second half, but the defense was a net positive on the night. (And that's especially true when you consider that not only did the Hornets hold their opponents below the league average efficiency threshold, they held the Spurs -- arguably the league's most efficient offense -- below league average marks).

I'll hold off on making too many definitive comments on the defensive system though until we've seen at least a couple week's worth of games.

I'm kind of going to ignore the second part for a little bit because everyone gets that part. Rivers is terrible at isolation, inexplicably can't come close to breaking down NBA defenders off the dribble, and shoots worse than a blindfolded Trevor Ariza. Yes, we all get that part.

Rivers also ran three outstanding pick and rolls tonight though, reading the coverage beautifully and delivering crisp bounce passes in each case. If memory serves, only one resulted in a converted field goal, but it's the process here and not the result. He's good at it. He knows what he's doing. And I want to see it happen some more.

Odds and ends: Jason Smith's facial expressions are magnificent. Roger Mason Jr. needs to get a new hairstyle so I stop confusing him with Aminu. Robin Lopez did a good job staying with Tim Duncan on plays where he knew the help was coming, I thought. And that first Darius Miller three pointer was tasty. 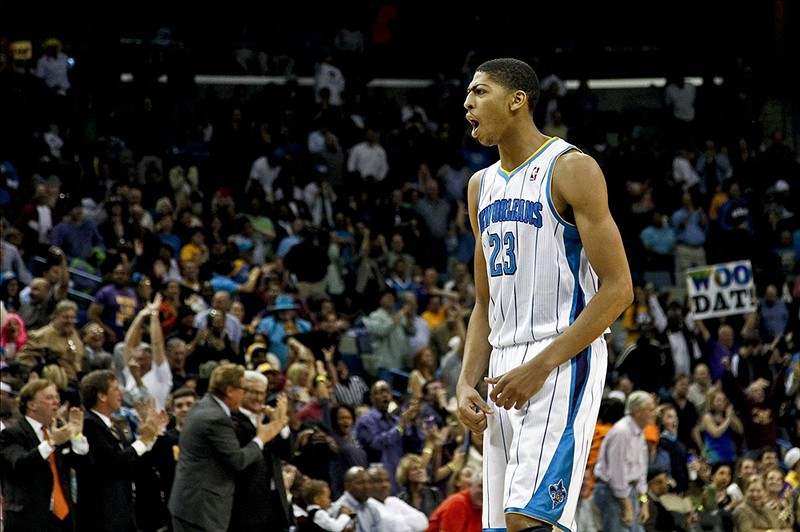 I remember November 1st, 2005 pretty vividly. For one, it was my birthday. It was also the professional debut of the Wake Forest point guard Chris Paul. I got home from school to fire up NBA Audio League Pass, the ESPN Gamecast, and if memory serves, one of the earliest and most unwatchable incarnations of questionable online streams. Chris Paul wasn't fantastic on that night -- his backup, Speedy Claxton, outplayed him comfortably -- but something about the way he moved was unmistakable.

There was a steel to his demeanor, an impossible steadiness with the ball in his hands that I'd never witnessed before. Chris Paul was still a long ways from Chris Paul, but already, something was different.

It was the same with Anthony Davis. We don't know if he'll be a star or come close to realizing his ridiculous offensive and defensive promise. We still don't really know what he is right now, and we most certainly don't know what he will become. But that potential for transcendence was on full display tonight, as glimmering and alluring and unmistakable as it was all those years ago.

And so I'll remember this night just as vividly for a long time to come. For one, it's my birthday again because that's apparently how those things work. It was also the professional debut of the Kentucky forward Anthony Davis, and oh man, it was lovely.