Share All sharing options for: Game 7: Hornets vs. Nuggets 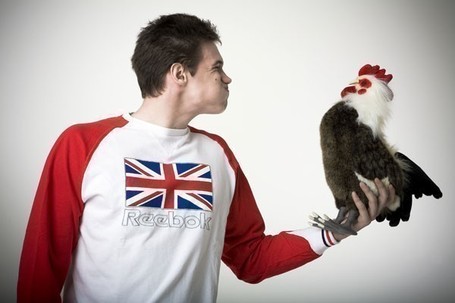 The injury news continues to be a major negative for the Hornets early in 2011-12. After returning to action for just one game, Eric Gordon will now miss the next 2-3 weeks with a bruised right knee. Marco Belinelli will replace Gordon at starting shooting guard. "It’s part of the game," Monty Williams said of dealing with injuries. "We’d love to have (Gordon on the court), but right now he’s not right. … It’s unfortunate, but it’s (part of) the NBA."

Trevor Ariza is also out.

I love this team. It's deep, it's talented, and it does things so refreshingly differently from the majority of today's NBA.

Let's start with the depth then. Nene Hilario - recently re-signed to an extension - is a gametime decision for tonight, but their starting lineup normally goes something like this:

That's one of the NBA's brightest young lead guards (119 ORtg on 21.4% usage in the early season), one of the league's top perimeter defenders who also happens to be a career 40% three point shooter, a 6'10" forward that handles and shoots like a guard and just turned 23, and an All-Star level power forward in the starting lineup. But that's just the beginning. Their bench is comprised of:

That's a unit that, if it started, would have a decent enough shot at beating our starters tonight. Toss in "spare" pieces like Corey Brewer and rookie Kenneth Faried (who I love, but hasn't been given a big role yet), and Denver is the deepest team in the league. In this ridiculous 66 game, frenzied sprint of a season, coupled with Denver's mile high altitude, the Nuggets are going to destroy fatigued teams. And indeed, they've already begun to do so, sporting the Western Conference's best efficiency differential in the young season.

They're also a very intriguing team in another sense - Denver is the league's fastest team so far, by pace (99 possessions a night), which isn't all that surprising. But they're also the league's most efficient defense, allowing just 94 points per 100 possessions (New Orleans is allowing 103 for comparison). Sure, it's a figure that is perhaps a bit unsustainable. Team offense has been down tremendously in these first few games, and as both offenses pick it up league-wide and as Denver's own defense begins to regress, it's likely that Denver moves out of the top defensive spot.

Nonetheless, the Nuggets have a real shot at a top-10 defensive finish. Teams that run up and down the floor very rarely have elite defenses, so what's happening in Denver now is extremely unique.

Teams like Utah and New Orleans have begun their post-superstar eras with wholesale rebuilding efforts, opting to burn everything to the ground. As we saw the other night, the result is staggeringly poor basketball in the short term. The Nuggets have opted for a vastly different strategy, stockpiling current talent and assets and are poised to make a run during a huge transition season in the Western Conference. Will it pay off? We shall see.

- Your opposing team blog for the evening is Denver Stiffs. Some cool bros over there.