The Hornets started off the game on a tear, led by a 5-6 first quarter performance from the newly-returned Eric Gordon, and also cooerced the Sixers into several bad shots, holding them to 16 points for the quarter. The hot shooting continued, but the Hornets defense relaxed and the Sixers began to get to the basket with relative ease, pulling it 47-40 Hornets at the half. The half time lead would not last long as it evaporated to 1 point in the first 2 minutes of the third quarter. The Hornets and Spencer Hawes (seriously, it was a lot of him) traded baskets for the remainder of the quarter, ending with the Hornets up 73-67. Defense remained optional to start the 4th as both teams continued to trade buckets. Offensive rebounds particularly hurt the Hornets, as they gave up too many easy shots at the rim after getting a stop. The Hornets defense did not improve any in the fourth, but they made up for it by failing to execute any semblance of a functioning offense. A series of miscues and turnovers coupled with a continued inability to stop the Sixers prevented the Hornets from winning a game in which they spent three and a half quarters with the lead. Despite another good offensive night from Jarrett Jack, a bounce back game for Carl Landry, and 22 points from Eric Gordon, the Hornets simply could not string together enough stops to win the game. More thoughts and player notes after the jump.


For a second night in a row, a seemingly working offense ground to a halt in the fourth quarter. Despite another great game statistically, Jarrett Jack is going to catch a lot of flack for his performance late in the game (the anti-Tebow). His costly mistakes and inability to chase Jrue Holiday off the 3pt line were a big problem in crunch time. For much of the fourth, Philadelphia opted to go with Andre Iguodala on Eric Gordon, and The Commissioner had a tough time finding open looks. As a result, much of the shot-creating fell on the Hornets PG and the result was very similar to what we saw against Utah, and at times, the games before that.

Much discussion will be had on the Hornets offense and Jack and Gordon, however the reason the Hornets lost this one comes down to something that Monty may mention 100 times in his post-game presser: defense. Make no mistake, even with the litany of mistake the Hornets made late on the offensive end, this game would have been easily sealed up with even a passing defensive showing in the second half. Take a look at the Sixer scores by quarter: 16, 24, 27, 34. Yikes. Once Philadelphia decided to start driving to the basket, led by an impressive Evan Turner, the usually stout Hornets D had no answer. Hornets guards could not stay in front of their Sixer counterparts on the perimeter, and the Hornets bigs were constantly one rotation off in trying to help. 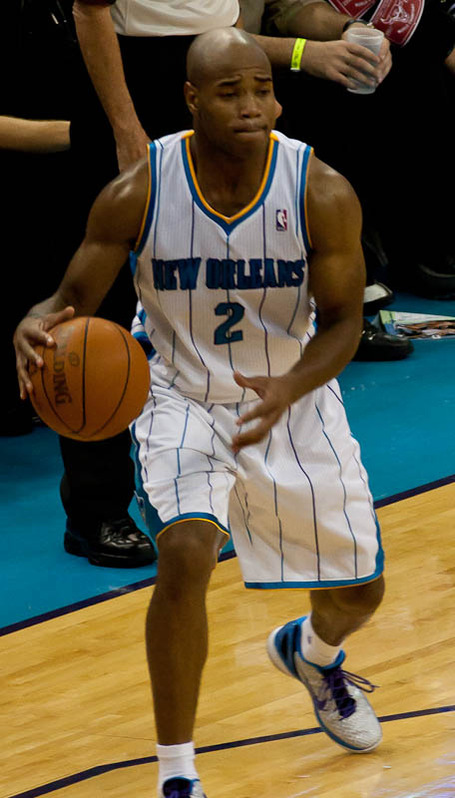 Jarrett Jack will certainly receive his share of (deserved) criticism, but he came through with another impressive stat line: 19 points on 7/15 shooting (5/5 FT) with 11 assists, 5 rebounds, and 3 TOs. Again, for a guy who has been relatively turnover-prone for much of his career, stat lines like that are a great sign. Just needs to get it together in crunch time. 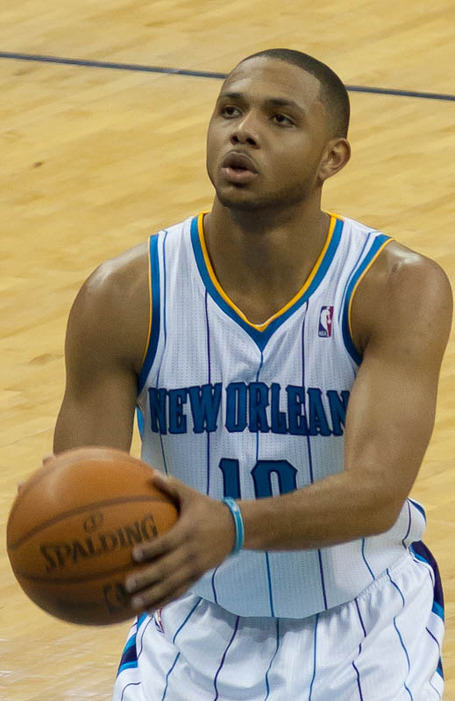 Eric Gordon burst out of the gate start 5-5 from the field, snagging rebounds, getting a block, and assisting on a basket. For the entire first quarter, he was by far the best player on the floor. After that he fell back down to earth, having a tough time finding good shots through much more attention from the Philly defense. Andre Iguodala, in particular, did a really good job of bodying up the equally physical Gordon and preventing him from getting open jumpers or finding open lanes to the basket. He did manage to sneak by Igoudala late, for a couple of baskets, but it was far too little, too late. Gordon finished with a solid 22 points (albeit on 22 attempts, 1/6 from 3), 6 boards, and an assist. Fist game back for Gordon and I think he showed a glimpse of what he can do for this team this year, as well as a warning that the Hornets will need to be able to generate offense once the defense is fixated on him.

Carl Landry had a nice bounce back offensive game after a poor showing in Utah. 21 points on 7 of 14 shooting with 8 boards (4 offensive). Good to see Carl get his game back on track, though defense (like most of the team) left something to be desired. In particular, he missed a box out on a key Igoudala put-back dunk that may have sealed the Hornets' fate.

Emeka Okafor had a game that shows why people are extremely critical of him. He would not stay with Spencer Hawes, who torched the Hornets on mid-range jumpers in the fourth. His pick-and-roll defense was also off, as he gave up easy driving lanes to Sixer guards. On the other side of the ball, I think Mek may lead the league in assists blown at the rim. Multiple times he would catch a great entry pass from the perimeter which should lead to an easy dunk. Emeka takes so long to gather the ball to lay it up that he ends up getting blocked or fouled, negating the nice pass. It also doesn't help that once he was fouled, he failed to convert at the line, going 1-4 from the stripe. One particularly exasperating play late saw Mek collecting a loose ball under the basket with no one around. He bent down picked it up, gathered himself, and..got fouled by a recovering Hawes. I swear it felt like it took him 10 seconds to collect the ball and attempt a shot. Obviously, he missed both freebies.

Al-Farouq Aminu reverted to the train wreck on roller skates offense (I'm sticking with this) we saw in his first appearances as a Hornet, going 0-4 from the floor with 3 fouls and 1 (I swear it was more than one) turnover. The turnover that made the box score was him attempting to throw and alley-oop to...someone. I hear it was Gordon, but Andre Igoudala was about 4 feet close to the pass and easily caught it and started a fast break. Another sequence saw Aminu get blocked 2 (maybe 3) times in one possession. His defense looked okay and he pulled down 4 rebounds, but if he continues to look so utterly lost on the offensive end, Monty can't afford to play him significant minutes.

Chris Kaman was the best of the bench finishing with 10 points on 7 shots and 8 boards with 2 assists and 2 TOs. His defense was as suspect as ever, but with the entire team failing to defend adequately tonight, I would have like to see him in at the end when the Hornet offense was freezing up.

Marco Belinelli played a quiet 21 minutes finishing 2/5 from the floor (1/2 3P) for 5 points. The miss from 3 was terrible (he looked off a wide-open Jack) and came late in the game with the Hornet trying to come back. He also could not stay in front of Evan Turner to save his life. Games like these make me laugh when I remember that this guy started over Marcus Thornton last year due to his superior defense. Ha. Ha.

Grevis Vasquez was even quieter in his time on the floor, not making a shot, but dishing out 4 assists and not turning it over. He did not have a prayer of staying in front of the speedy Sixer guards though, which probably contributed to him only playing 13 minutes.

Trey Johnson made another appearance, this time playing 12 minutes and making his only shot (a tough baseline leaner).

Jason Smith fell back down to Earth tonight. He made 3/4 shots (9pts), but was constantly out of position on defense and gave up easy offensive rebounds while going for blocks he had no chance of getting. His energy is great, but he needs to learn when to use it better.

No Gus, No Squeaky.

That's it. I may add some quotes later, but I skipped out of the locker room after the game, because I'm exhausted. Matt may be adding some game day photos later and Rohan may be live blogging his reactions to watching the game on tape-delay. Hornets come back at home on Friday against a good and deep Nuggets team. Geaux Hornets.

*Notes from Matt: shoutout thanks to Derek Hingle for the loan of a lens that allowed me to shoot from TBOTB.